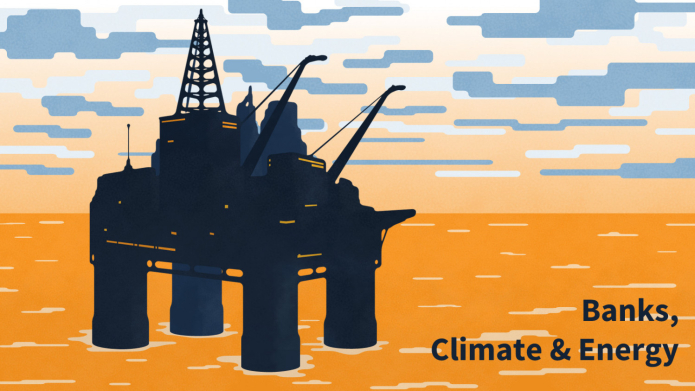 Banks and the climate crisis

The climate crisis is the greatest environmental threat of our time. According to the Intergovernmental Panel on Climate Change (IPCC), continuing with business-as-usual will result in a 3-5°C average global temperature increase by the end of this century. To prevent the worst impacts from climate change on ecosystems and society, ‘’rapid, far-reaching and unprecedented changes in all aspects of society’’ are urgently needed. Sadly, the world is quickly reaching a point of no return. Continuing on the current course will make it difficult, if not impossible, to prevent the widespread and catastrophic impacts of climate change. The costs will be substantial: hundreds of billions spent to deal with the destruction of extreme weather events, untold human suffering and the deaths of tens of millions.

The international community in 2015 agreed to confront this issue by adopting the Paris Climate Agreement. The central aim of the agreement is "to strengthen the global response to the threat of climate change by keeping a global temperature rise this century well below 2 degrees Celsius above pre-industrial levels and to pursue efforts to limit the temperature increase even further to 1.5 degrees Celsius’’. In order to have even a 50% chance of limiting global heating to 1.5 degrees Celsius, global emissions must be reduced by roughly half of 2010 levels by 2030 and further reduced to effectively zero by 2050.

Banks, like all companies, produce greenhouse gases (GHG) directly through their activities. However, their most important contribution to GHG emissions is indirect, through the financing of clients and projects that generate GHG emissions. Banks also continue to play a key role as major financiers of the coal, oil and gas industry, effectively delaying the much needed transition from a fossil fuel-based to an efficiency- and renewable energy-based economy.

Fossil Banks, No Thanks!

To stop the climate crisis from further unfolding and end our dependence on fossil fuels, banks must stop financing the fossil fuel industry. But this is not happening! According to our latest "Banking on Climate Change" report, published in March 2020, between 2016 and 2019 just 35 global private sector banks funnelled a staggering USD 2.7 trillion into fossil fuel projects and companies globally. More than USD 975 billion of these investments went to the expansion of the fossil fuel industry.

Sadly, each new bank-financed oil well, coal mine, coal power plant or gas terminal is incompatible with achieving the goals of the Paris Climate Agreement. The potential emissions from the coal, oil and gas operations that are already in production will already exhaust the carbon budget for 2 degrees Celsius, let alone the stricter target of 1,5 degrees. Banks may point out that they increase their lending for renewable energy, that they ‘engage with clients on emissions reduction’, or even that they change their light bulbs. Some have taken it a step further and no longer finance coal mines, tar sands, or oil and gas projects in the Arctic, but no large private sector bank has yet committed to end its financing of the fossil fuel industry altogether.

Together with a global coalition of civil society organisations we demand from all banks that are still financing fossil fuels to: 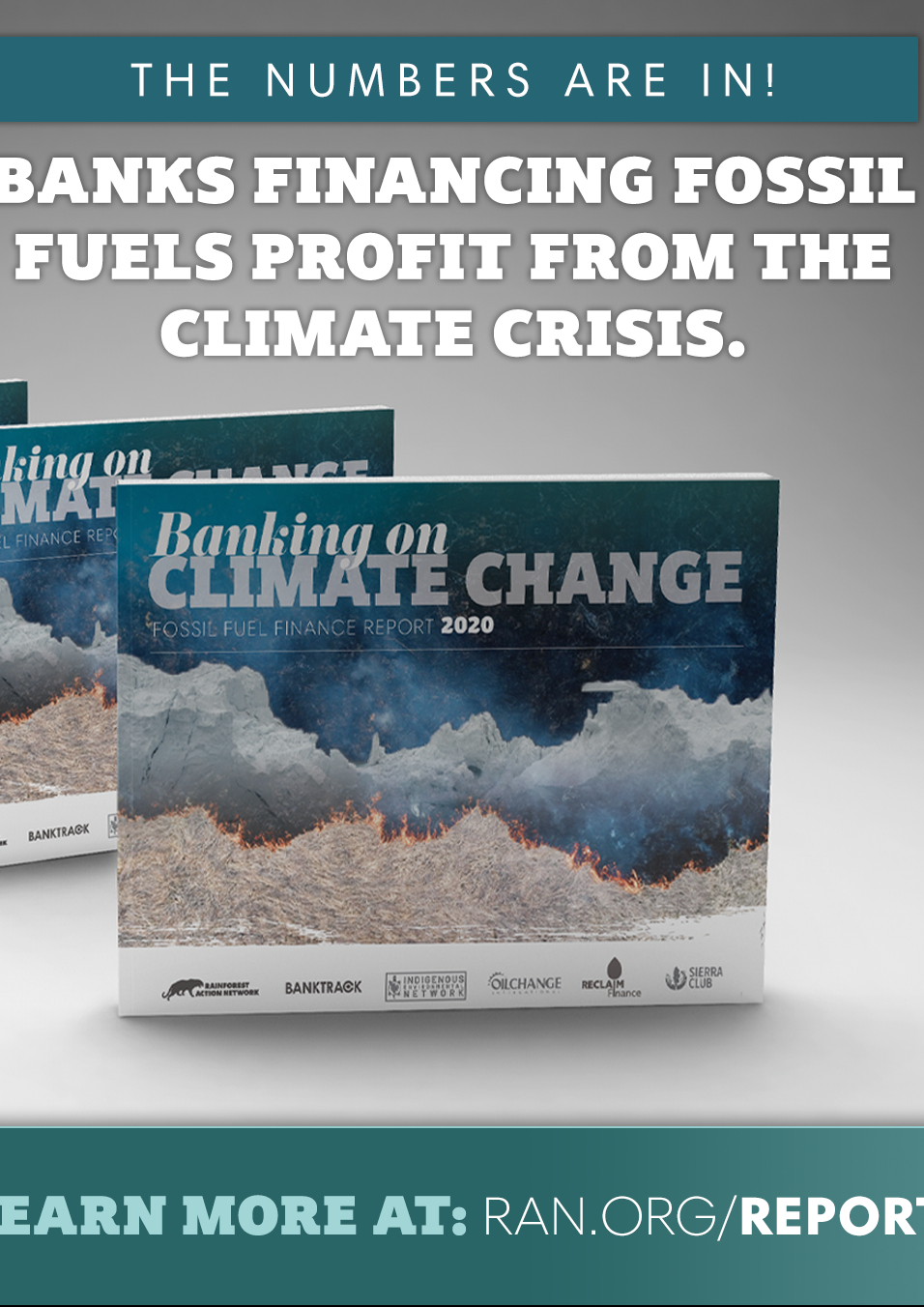 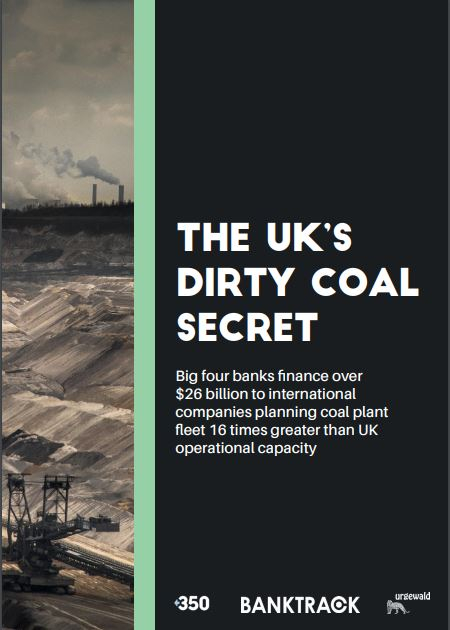 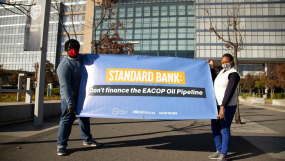 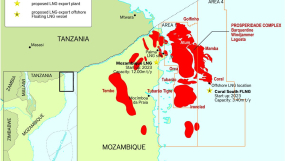 Banks and Arctic oil and gas

Banks and offshore oil and gas

Banks and fracked oil and gas

Oil and Gas Extraction
There are no projects active for Banks, climate and energy now.

Before Bailing Out Fossil Fuel Companies or Their Bankers, Congress Should Read This

America’s JP Morgan Chase has pumped more than the GDP of Finland into fossil fuels expansion since the Paris climate accord of 2015, while Japan’s and China’s mega banks have also been ‘failing miserably’ in their response to climate change over the last four years, a report from a coalition of NGOs has shown.
2020-03-20 | Eco-Business
blog
external news
our news

Analysis of 35 leading investment banks shows financing of more than $2.66tn for fossil fuel industries since the Paris agreement
2020-03-18 | The Guardian
blog
external news
our news

The Planet Is Screwed, Says Bank That Screwed the Planet

A report from two economists at JP Morgan Chase pushes back against traditional economic wisdom on climate change.
2020-02-25 | The New Republic
blog
external news
our news

The financial giant is the fossil-fuel industry’s biggest lender. Protesters hope a national campaign of civil disobedience will force it to change course
2020-02-24 | Rolling Stone
blog
external news
our news

Lloyds Bank, one of the largest in the UK, will not fund Arctic oil and gas operations
2020-02-21 | Sierra Club
blog
external news
our news

HSBC lags as finance cleans up on Asian energy

Lloyds set to halve carbon emissions it finances in 10 years

Banks, insurers and pension funds are as culpable for the climate emergency as the fossil fuel industry - especially those at the World Economic Forum Annual Meeting
2020-01-21 | Greenpeace
blog
external news
our news

Greenpeace hits out at Davos banks for $1.4tn climate hypocrisy

Asia's appetite for coal grows, with China the key decider

Banks get tough on shale loans as fracking forecasts flop

Which European banks do the most to stop climate change?

The Azerbaijani Laundromat scandal and the Trans Adriatic Pipeline

BankTrack has signed the Lofoten Declaration

Green Climate Fund must say no to partnerships with HSBC, Crédit Agricole

Stranded assets, anyone? Testing times for the fossil fuel market

HSBC shuts down City branch in face of climate protest

Goldman and Deutsche back India Coal despite their environmental standards

Regarding recent protests toward Bank of America on campus

Financial institutions: the next chapter in climate change shareholder activism

It is time the EU scraps its carbon Emissions Trading System

New guidance notes on energy by ORSE: Falling short of the mark!

What can UBS learn from Charles Dickens' ghosts

Bank of America: Strong on Rhetoric, Weak on Climate & Coal

Investors in Australian mega coal mine proposal warned of risks

Environmental groups rate banks based on support of coal

US banks risk public health and climate by financing coal

Eight arrested during protest at Bank of America headquarters

As occupy Wall Street gains momentum, an effort to close consumer accounts from Bank of America is launched

Bank Of America, The Bank Of Coal

Coal-friendly Poland: a bad climate leader for the EU

Big banks 'no' to coal plant

Climate Week in turmoil over revelations of sponsor's climate damage

HSBC takes a step away from tar sands

Coal India IPO shows the mountain we have to climb

Another big bank turns away from mountaintop removal!

Banks being urged to lend 'green'

Banks under scrutiny over coal funding

Like blowing up the Alps: Is Swiss Bank UBS the last financier of Massey's big coal Mayhem?

Another oil sands AGM protest, this time at a bank

New regulations will put an end to mountaintop mining

Chase is bankrolling the destruction of American mountains for coal. End mountaintop removal and put Chase on the run
2010-02-18 | International | RAN
blog
external news
our news

Banks are pulling out of the carbon-offsetting market

Ex-Im bank undermines U.S. credibility at Copenhagen with $3 billion in financing for ExxonMobil

Cashing in on Coal - New Report

Protests at shareholders meetings of Citi, Bank of America and RBS

UBS alerted over Phulbari Coal mine

Activists Drape 50-Foot Banner Across From Bank of America Headquarters

Lapindo Brantas is shirking its responsibility for the damage
2007-06-21 | Brussels Belgium, Jakarta Indonesia | Friends of the Earth Europe
blog
external news
our news

And while London burns - in Square Mile

Oil for Germany, at any cost

Dutch banks score below the mark on climate policies

Protests against years of destructive investments at Wells Fargo AGM

Insurers poor in assessing and disclosing risks of climate change

Coal financing- what the KfW prefers to keep under wraps

A look into the portfolios of the world’s largest banks
2011-11-30 00:00:00 | Published by urgewald, groundWork, Earthlife Africa Johannesburg and BankTrack
ngo documents

Bank of America: Risking Public Health and the Climate

The Principle Matter - Banks, climate and the Carbon Principles

A climate strategy for banks: know your financed emissions

A bank for the future: maximizing public investment in a low-carbon economy

Banking on carbon accountability: 2: The carbon impact of investment

The evidence against carbon trading and for real solutions to avoid a climate crunch
2009-11-05 00:00:00 | Friends of the Earth UK
ngo documents

Designing carbon markets for environmental and financial integrity
2009-09-22 00:00:00 | Friends of the Earth US
ngo documents

Aandelen in klimaatverandering / Shares in climate change (in Dutch, with English summary)

Cashing in on coal: RBS, UK banks and the global coal industry

Saving money while saving the planet? Feedback from the first experience of CO2 labeling on banking products

The biggest cause of climate change: Coal-fired power plants

The dirty truth about clean coal

The energy revolution: Greening the grid

The Oil & Gas Bank - RBS & the financing of climate change

Climate Change Litigation Cases: Analyses of Issues to be Addressed

Investing in Climate Change: the role of Dutch banks

Climate change and the financial sector: An agenda for action (Full report)

Carbon Trade Watch Briefing Nr. 1. "The Sky is not the limit: The emerging market in greenhouse gases"

A project of the Transnational Institute
http://www.carbontradewatch.org/

Coal is a disaster for the climate, stop investments in coal fired power plants!

An interactive documentary exploring how UK banks are financing coal mining in Indonesia. You can navigate your own way through a range of material. The documentary includes interview clips: including indigenous people whose homelands have been destroyed by coal mining, people in the mountains of Java running their own renewable energy projects, finance experts and campaigners.
http://www.wdm.org.uk/webdoc

This map shows the location of coal power plant developments that are at the financing stage. BankTrack works with a network of local NGOs and campaigners on the ground to halt private banks` investments into new coal power plants.
http://www.netwerkvlaanderen.be/carbon

voluntary framework for financial institutions to guide the finance sector in tackling the challenge of climate change.
http://www.theclimategroup.org/about/corporate_leadership/climate_principles

This is a project by PLATFORM, working to reduce the environmental and social impacts of oil corporations, to help citizens gain a say in decisions that affect them, and to support the transition to a more sustainable energy economy.
http://www.carbonweb.org/