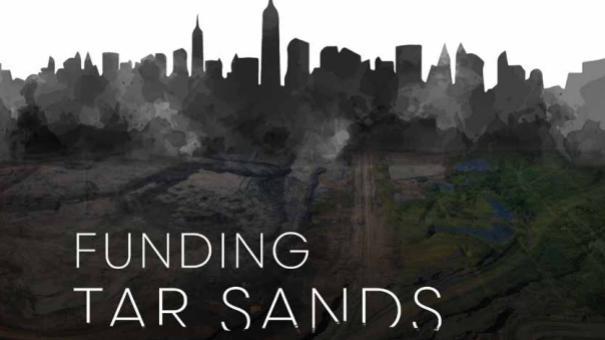 According to a new report released today, commercial banks continue to finance the tar sands sector at levels that do not align with the Paris Agreement 1.5° to 2° target –– and finance levels are surging in 2017.  The report, released by Rainforest Action Network (RAN) and 11 organizations from around the world, finds that tar sands financing for producers and pipeline companies so far in 2017 is already at levels 50% greater than all of the financing committed in 2016.

"At the COP, while governments prepare to take stock of their progress toward reaching the Paris Agreement goals, banks must do the same," said Patrick McCully, Rainforest Action Network’s Climate and Energy Program Director. "We call on global banks to establish policies immediately that align their actions with their stated support for averting climate disaster and respecting Indigenous and human rights. This must include exiting the tar sands sector and strengthening policies to ensure that Indigenous rights are respected."

Tar sands are a unique fuel due to high extraction costs, difficulties in getting to market, huge reserves, greenhouse-gas intensity, major local environmental and Indigenous rights impacts, and immediate substitutability by less carbon-intensive and cheaper alternatives. And yet, the thirty-three banks analyzed in this report have financed tar sands to the tune of $32 billion in 2017 alone.

"When President Trump announced he would pull the US out of the Paris Agreement, he drew a line: the Paris Agreements’ goal of limiting climate change to 1.5°C on one side, and his administration on the other. On what side of the line do banks fall? JPMorgan Chase’s CEO has said he disagrees with Trump on this issue, and yet, the bank has increased its financing for tar sands this year, banking on major companies as they acquire new tar sands assets," said Alison Kirsch, Rainforest Action Network’s Climate and Energy Program Research Coordinator.

JPMorgan Chase is again found to be the largest U.S. banker of tar sands, and with its policy grade at a D+, the bank clearly lacks guardrails to curtail this financing.

"What we need to stay on target is a rapid fossil fuel phase out. Meanwhile the world’s biggest banks are financing the consolidation and expanding production of one of the most extreme fossil fuels, tar sands," said Yann Louvel, Climate and Energy Campaign Coordinator at BankTrack. “While a few European banks have put in place policies to restrict this dangerous financing, most big banks lack firm policies to exclude support for expansion of the tar sands, which is necessary on climate and moral grounds.”

In response to public pressure from Indigenous-led and grassroots organizations, as well organizing by NGOs in Europe, some banks have made policy commitments to cut tar sands funding. In October 2017, BNP Paribas, the second-largest bank in Europe, established a new standard for global banks. The tar sands portion of the policy excludes companies with more than 30% of their business in tar sands, and rules out financing for the full range of tar sands projects including pipelines: Keystone XL, Trans Mountain and  Line 3.

A complementary report by Greenpeace and Oil Change International, 'In the Pipeline: Risks for funders of tar sands pipelines,' also released this week, warns of major banks’ exposure to financial and reputational damage due to their financing of tar sands pipelines. The report examines in depth the range of risks impacting all three proposed tar sands pipelines including legal challenges, opposition from Indigenous and local communities, threats to drinking water and economic vulnerability.

"Extreme weather events are accelerating, heat records are broken year after year, but banks still put their profits first, over the climate and humanity. When they refuse to end business relationships with companies that, like Enbridge and TransCanada, continue to develop a sector as risky as the tar sands, they are ignoring the 1.5 - 2 °C targets. Yet, these companies’s new tar sands projects amply justify their exclusion from the banks' support, regardless of the activities they could develop in less carbon-intensive sectors. We will maintain the mobilisation until banks have aligned their policies with the new standard established by BNP Paribas", stated Lucie Pinson, Private Finance Campaigner at Friends of the Earth France.

"Communities across the United States and Canada are fighting back against dirty tar sands projects that threaten the climate, and it's time for big banks to recognize that they cannot continue to fund these dangerous projects without consequences,” said Kelly Martin, director of the Sierra Club’s Beyond Dirty Fuels campaign. "That's why local governments and institutions are divesting from banks that support fossil fuels, and thousands of people have already committed to moving their own money out of these banks. We will not back down until banks commit to investing in a future that benefits our communities, our economies, and our health."