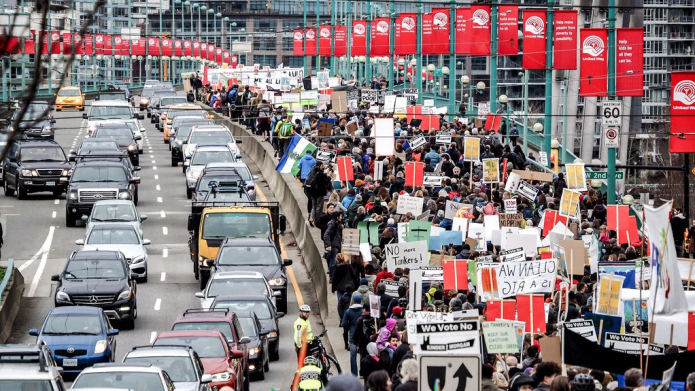 The Trans Mountain Pipeline Expansion project, an expansion of the original Trans Mountain Pipeline (built in 1951), is a 1,150 km pipeline between Strathcona County, Alberta and Burnaby, BC. in Canada. The pipeline is the only West Coast link for Western Canadian oil. The expansion (in the form of a parallel pipeline) is expected to almost triple the capacity of the system, taking an additional 590,000 barrels of crude oil from the Alberta tar sands each day to the Burnaby refinery on Vancouver Harbor. From there, the oil would be loaded onto supertankers to be shipped out across the Pacific. The projected capital costs were CAD 7.4 billion, but have skyrocketed due to delays resulting from widespread and powerful opposition.

Private sector banks should refuse any future opportunity to finance this project, or provide financial services to this company, whether under government or private sector control.

The Trans Mountain Pipeline expansion poses a grave threat to Indigenous people, as described in this letter written by several NGOs and groups of Indigenous people to 28 banks who were, at the time, involved in financing the project. The parallels with the struggle over the Dakota Access Pipeline are clear, leading to questions about whether the Trans Mountain conflict may become the “Standing Rock of the North.”

The Trans Mountain project does not have the Free, Prior and Informed Consent (FPIC) of the Indigenous people it will affect. First Nations groups that would be directly impacted by the route and port terminal are fighting the project in the courts and leading heated protests on the ground. As of July 2019, Tsleil-Waututh Nation, Squamish Nation, Ts’elxweyeqw tribes, Shxw’owhamel Nation, Coldwater Indian Band and Stk’emlupsemc te Secwepemc Nation were involved in multiple legal challenges to the pipeline’s construction. and direct action campaigns have been ongoing. The Tsleil-Waututh established a “Watch House” on their territory to monitor and resist construction; Secwepemc women have established the “Tiny House Warriors,” small, mobile houses built to reoccupy Secwepemc territory and prevent pipeline construction. Detailed reports, such as Standing Rock of the North and Assessment of the Trans Mountain Pipeline and Tanker Expansion Proposal outline, in detail, crucial elements of Indigenous opposition to the project.

As noted by the Treaty Alliance Against the Tar Sands, the expansion of the Canadian tar sands would lead to increased destruction and poisoning of lands, waters and air on Indigenous territory.  There is widespread opposition to tar sands expansion among these groups, who are committed to fighting the pipelines which make such expansion profitable.

The TMEP would draw heavily on supply from the Alberta tar sands in Canada. These bitumen deposits require a lot of effort to extract, and process before the oil can be sent to conventional refineries. Most of the current extraction process takes place in open-pit mines, with massive machinery scraping up the tarry sandstone and moving it to facilities for processing. The heavy crude is found mixed with sand, clay, and water, which must be removed, then the heavy crude must be "upgraded" to reduce viscosity and improve quality (The Atlantic, Greenpeace). This extraction process has a heavy carbon footprint and has a a devastating effect on land, producing massive amounts of toxic byproducts. Studies show oil sands crude emits more greenhouse gases than conventional crude oil. Pipeline expansion enables the expansion of this toxic extraction.

The existing and proposed pipelines ship diluted bitumen through an extremely sensitive environmental region. The tankers have to pass through a very narrow channel of shallow water to reach the open sea, posing a major threat to an endangered population of orcas (the iconic “killer whales” beloved across the world, and culturally significant for the Tsleil-Waututh people).

The original Trans Mountain Pipeline has a controversial history of oil spills; in the period 1961-2016 there were 81 reported incidents. A July 2017 Greenpeace report concluded that oil spilled into bodies of water is difficult to fully clean up, posing serious risks to human health and the environment,. Diluted bitumen transported from Canada’s tar sands represents a particular threat to water resources along the routes of proposed pipelines.

A Canadian court has overturned Ottawa’s approval of the Trans Mountain Pipeline – throwing plans to nearly triple the flow of Alberta’s landlocked bitumen to the west coast into limbo – in a ruling hailed by environmentalists and Indigenous groups. In a unanimous decision, the federal court of appeal said the government failed to consider the concerns of some First Nations.

Canada’s federal government has announced it will buy a controversial pipeline from the Alberta oil sands to the Pacific coast to ensure it gets built. The country’s finance minister, Bill Morneau, said on Tuesday that Justin Trudeau’s government will spend CAD 4.5bn (USD 3.45bn) to purchase Kinder Morgan’s Trans Mountain pipeline.

Finance Minister Bill Morneau said Wednesday he is prepared to protect the Trans Mountain oil pipeline expansion to the west coast against financial loss. Morneau did not put a price tag on the commitment that was quickly characterized as a "blank cheque" by both an environmental group and the federal NDP leader. (National Observer)

Kinder Morgan's Chairman Steve Kean announced he would scrap plans to nearly triple the capacity of the Trans Mountain pipeline, which takes crude from Alberta’s oil sands to a facility in the Pacific province of British Columbia, unless the various legal challenges could be resolved by May 31 (Reuters).

A report published by the Indigenous Network on Economies and Trade has laid out the flawed valuation that Kinder Morgan Canada has projected regarding the Kinder Morgan Trans Mountain Expansion Project (TMEP). The company was named to have failed on multiple bases in crucial areas to account for the lack of political, legal, and proprietary certainty surrounding the pipeline.

Canadian lender Desjardins is considering no longer funding energy pipelines, a spokesman said on Saturday, citing concerns about the impact such projects may have on the environment. Desjardins, the largest association of credit unions in North America, on Friday temporarily suspended lending for such projects and may make the decision permanent, spokesman Jacques Bouchard told Reuters by telephone (source Financial Post).

Kinder Morgan Canada Ltd has raised CAD 5.5 billion (USD 4.16 billion) for its Trans Mountain Pipeline Expansion Project and could have raised even more, the company said on Friday, despite pressure on banks to back away from the project. Energy infrastructure projects have faced opposition from environmental groups and aboriginal communities whose land they touch. Opposition to Trans Mountain is set to mount after the effective rise of an unfriendly government last month in Canada's British Columbia province that the pipeline passes (source Reuters).

Over 20 Indigenous and environmental organizations delivered an open letter to 28 major banks, calling on them to back away from funding the Trans Mountain pipeline expansion project (TMEP). The warning letter urges banks to avoid the reputational and financial risk of supporting this destructive project, which is incompatible with realizing the goals of the Paris Climate Agreement and respecting human rights, especially those detailed in the U.N. Declaration on the Rights of Indigenous Peoples (source Advnf.com).

Project approved by the Government of Canada

On November 29, 2016, the Government of Canada granted approval for the Trans Mountain Expansion Project. The expansion concerns the existing 1,150-kilometre pipeline between Strathcona County (near Edmonton), Alberta and Burnaby, BC. The expansion will create a twinned pipeline increasing the nominal capacity of the system from 300,000 barrels per day to 890,000 barrels per day (source Trans Mountain).

In April 2017, Kinder Morgan filed for an IPO to finance the CAD 7.4 billion Trans Mountain Expansion Project. The IPO closed on May 31st, raising CAD 1.75 billion. The company then established a CAD 5.5 billion credit facility, of which CAD 5 billion is specifically for the costs of the Trans Mountain Pipeline Expansion, making the credit facility effectively a project related corporate loan.

A total of 28 banks have been involved in financing Kinder Morgan through corporate loans and underwriting. TD Bank and RBC are leading finance for the pipeline - the banks were the main underwriters of the credit facility, and also the joint bookrunners of the IPO, via TD Securities and RBC Capital Markets. More details on this is provided below.

One of the world’s leading human rights bodies calls for work to stop on Coastal GasLink pipeline, Trans Mountain pipeline and Site C dam, saying Canada is failing to comply with international law
2021-01-15 | The Narwhal
blog
external news
our news

The federal government is set to become the official owner of the Trans Mountain pipeline expansion after failing to quickly flip the project to another private-sector buyer.
2018-07-23 | www.huffingtonpost.ca
blog
external news
our news

How Kinder Morgan's bankers are funding a tar sands pipeline

What’s behind Kinder Morgan’s May 31 ultimatum? Follow the money

Pipeline poker: How the Trans Mountain expansion project could play out in B.C.

The Energy 202: What the Dodd-Frank rollback could mean for energy companies

A pipeline rattles the political landscape

B.C. grand chief responds to Alberta premier on Trans Mountain, warning it 'will never see the light of day'

Kinder Morgan investors should be prepared to lose their shirts

Canada's Oil Pipeline To The Salish Sea: What You Need To Know

From Standing Rock to Trans Mountain, dissent is in the pipeline

Are we ready for oil spills in the Salish Sea?

Standing Rock of the North

Does your money fund oil pipelines?

The Sacred Trust is an initiative of the Tsleil-Waututh Nation (TWN). Its mandate is to stop the Trans Mountain pipeline and tanker project.

The original Trans Mountain Pipeline started operations in 1953. In 2008, Kinder Morgan completed a second pipeline, running parallel to the first, for the portion of the pipeline running between Hinton, Alberta, and Hargreaves, British Columbia, increasing capacity by 40,000 barrels per day to 300,000 barrels per day.

In 2013, Kinder Morgan filed an application to the Canadian National Energy Board for building a third pipeline named the Trans Mountain Pipeline Expansion Project. The third pipeline was to run roughly parallel to the existing pipeline, between Edmonton and Burnaby, (east of Vancouver), and to be used to transport diluted bitumen. The additional pipeline requires twelve new pumping stations. The proposed expansion, with 980 kilometres (610 miles) of pipe, would almost treble the system's capacity from 300,000 barrels a day to 890,000.

In April 2018, in the context of massive resistance to the pipeline expansion, Kinder Morgan announced they would be suspending construction work. Shortly afterwards, the Canadian federal government announced it would be buying the existing Trans Mountain pipeline outright, and the expansion would be undertaken as a government-funded project. But the government has emphasized its intention to turn the project back over to the private sector as soon as it can find a buyer.

But in August 2019, the Canadian Court of Appeal overturned the National Energy Board’s approval of the pipeline. The project is still supported by the Canadian government, but remains entangled in legal and regulatory challenges. Indigenous-led opposition remains strong.