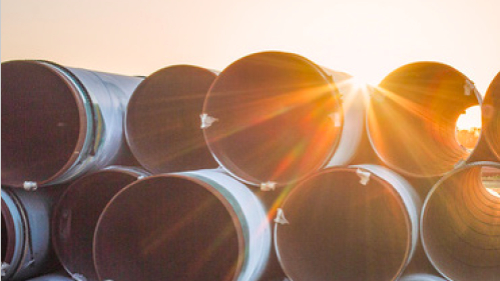 "In the pipeline" report front cover, October 2017. Photo: Greenpeace, Oil Change International
A new report by Greenpeace and Oil Change International warns of major banks’ exposure to financial and reputational damage due to their financing of tar sands pipelines. The report, In the Pipeline: Risks for funders of tar sands pipelines, examines in depth the range of risks related to all three proposed tar sands pipelines including legal challenges, opposition from Indigenous and local communities, threats to drinking water and economic vulnerability.
Barclays, JPMorgan Chase and the TD Bank Group are among the world’s major banks financing tar sands pipelines and the companies behind them (Kinder Morgan’s Trans Mountain Expansion, TransCanada’s Keystone XL, and Enbridge’s Line 3 expansion).
Among the major risks identified in the report are:
The report, therefore, recommends that banks do not finance or arrange financing (including the issuance of securities), related to new tar sands pipelines. Existing funders are encouraged to sell their stakes in full or not renew credit facilities. The report further provides bank investors with a list of questions to pose to management to understand whether risks are being properly managed.
A forthcoming report by Rainforest Action Network and partner organizations grades large multinational banks on their policies concerning tar sands financing, finding that most lack policies to curtail their significant exposure to these risky pipelines and the companies behind them. The report will be published on November 2nd and available at www.ran.org/fundingtarsands.
Another report released earlier this month by the Secwepemc Nation in B.C., whose land Kinder Morgan’s new pipeline is slated to cross, further details risks related to Indigenous assertions of their rights and title over unceded land.