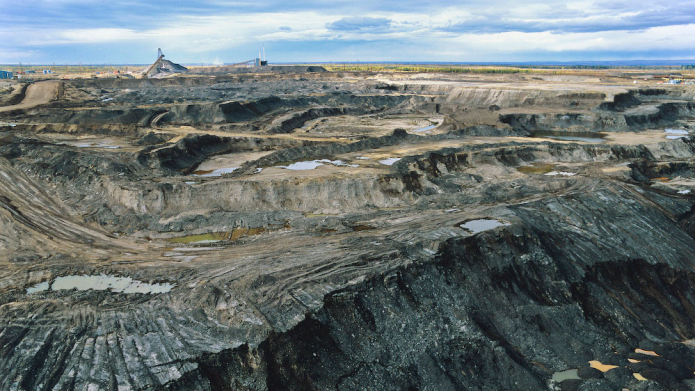 Enbridge’s Line 3 Pipeline Replacement Project is a proposal for a new pipeline that would cover more than 1,000 miles from Hardisty, Alberta, to Superior, Wisconsin, transporting an average of 760,000 barrels of crude oil from the Alberta tar sands each day, with capacity for 844,000 barrels per day. The project is estimated to cost CAD 5.3 billion, making it Enbridge’s largest project to date.

Enbridge intends to abandon its existing Line 3 pipeline if it is able to complete its new Line 3, leaving the corroding pipe in the ground and a lasting legacy of contamination. The replacement Line 3 would take a brand new route. This path cuts through pristine wetlands and watersheds in northern Minnesota, passing through the headwaters of the Mississippi River to the shores of Lake Superior, through the heart of Minnesota’s lake country and some of the largest and most productive wild rice beds in the world.

Enbridge's new Line 3 Pipeline threatens the environment by expanding access to dirty tar sands oil, while crossing important eco-systems, including forests and wetlands in Minnesota and the Great Lakes.

Bank financing for tar sands pipelines, either through project finance or through credit facilities like those being provided to Enbridge, directly supports tar sands expansion, since these pipelines enable tar sands companies to move produce and transport much more crude oil.

Banks should avoid ​arranging ​or​ ​renew​ing ​business​ ​relationships,​ ​including corporate​ ​level​ ​finance​ ​and​ ​revolving​ ​credit,​ ​with​ ​Enbridge​ ​​and​ ​its​ ​subsidiaries,​ ​until it​ ​ceases​ ​expanding​ ​tar​ ​sands​ ​operations.

Despite being billed as a replacement, the old Line 3 will not be removed when the new Line 3 is put into service. The old pipeline that will be left abandoned crosses 300 miles of northern Minnesota, but the state authorities have no plan to protect landowners from the financial and ecological risks associated with the decomposition of the pipeline.

In January of 2019, The Intercept reported that “law enforcement has engaged in a coordinated effort to identify potential anti-pipeline camps and monitor individual protesters, repeatedly turning for guidance to the North Dakota officials responsible for the militarized response at Standing Rock in 2016.”  Resistance to Line 3 construction has been the subject of heavy surveillance by both private security and publicly funded police forces, and collaboration with the actors responsible for the rubber bullets, tear gas, razor wire and water cannons in North Dakota is deeply troubling. The Trump Administration is backing legislation to punish pipeline protestors with up to 20 years in jail.

The old Line 3 – which will be left abandoned - runs through American Indian reservations Leech Lake and Fond du Lac.  Although the proposed new Line 3 will not cross any reservations it will still jeopardize so-called usufructuary or use-rights between Ojibwe bands and the United States government. These use-rights include the rights to hunt, fish, gather medicinal plants, harvest and cultivate wild rice, and preserve sacred or culturally significant sites.

Among the newly proposed route over 180 archaeological sites have been identified, including burial mounds, cemeteries and sacred sites. Lake Minnewawa and Big Sandy Lake which are sacred to the Ojibwe people and used for fishing will be threatened by the new Line 3. Both the construction of and spills from the new Line 3 will threaten traditional foods and medicines, including wild rice which is economically as well as culturally important in Minnesota. Twenty wild rice lakes are within the reach of the oil spills from the new Line 3.

Over 150 First Nations and Tribes across Canada and the U.S. have signed the Treaty Alliance Against Tar Sands Expansion, opposing the use of the signatories’ Indigenous territories and coasts for new or expanded pipeline infrastructure projects that would facilitate the expansion of the tar sands.

New tar sands projects require new pipelines to be financially viable - the impact of these new pipelines should, therefor, include the expansion of tar sands extraction. Tar sands are 21% more carbon-intensive than, and require three times as much fresh water to extract and refine as, conventional oil. The toxic wastewater is stored in storage ponds or underground wells, risking contaminated groundwater.

The new Line 3 will cross several important ecosystems including undisturbed forest, important wetlands and some of the most delicate soils, aquifers and pristine lakes in northern Minnesota and the Great Lakes, which are home to one fifth of the world’s fresh water. A July 2017 Greenpeace report noted that oil spilled into bodies of water is difficult to fully clean up, posing serious risks to human health and the environment. Diluted bitumen transported from Canada’s tar sands represents a particulary grave threat to water resources along the routes of proposed pipelines. Leaks might go unnoticed for months since detection systems are only able to detect leaks above 150,000 liters per hour and the preferred route crosses many remote areas.

Enbridge has been responsible for many oil spills in the past, including 20,082 barrels of diluted bitumen into the Kalamazoo River in 2010 - the largest inland oil spill in US history. Expanding the capacity of Line 3 only increases the risk of such disasters in the future.

Environmental and Social Management Policy for Financing and Investment Activity

Position on Climate change, energy efficiency and the challenges of the energy transition in Germany

Climate-related standards in the enery and utilities sectors

After having received a construction stormwater permit from the Minnesota Pollution Control Agency on 30 November, the final obstacle following years of legal challenges and environmental reviews, Enbridge said on 7 December that construction on the Line 3 pipeline replacement has started. The Red Lake and White Earth Bands of Chippewa asked the independent Public Utilities Commission (PUC) to stay its earlier approval of the project, citing pending litigation before the Minnesota Court of Appeals, but this was rejected. The replacement segments in Canada, North Dakota and Wisconsin are already operating, leaving only the 542-kilometre stretch in Minnesota. (CBC.org and S&P Global)

On 12 November, the Minnesota Pollution Control Agency (MPCA) and the Department of Natural Resources approved a number of key permits for the Line 3 pipeline, including a water crossing permit, capped air emissions permit and National Pollutant Discharge Elimination System wastewater (NPDES) permit (MPCA). This is expected to trigger the approval of remaining federal permits by the US Army Corps of Engineers. The final remaining construction storm water permit is then expected to be approved by the MPCA within about a month as well. Construction will then likely begin immediately, even though several lawsuits against the pipeline, including one by Minnesota’s own Department of Commerce, are still pending.(mpr.org)

Enbridge Energy officials said Wednesday that they have completed a small section of its Line 3 crude oil pipeline replacement project in North Dakota, leaving only the Minnesota stretch that has been challenged by state officials and others. (Star Tribune)

The Minnesota Public Utilities Commission (PUC) voted 3 to 1 on three key approvals for the project: a revised environmental review, a certificate of need and a route permit. The PUC originally voted to approve the controversial oil pipeline project in June 2018. Calgary-based Enbridge Energy is proposing to build the new line, which would replace the current Line 3 crude oil pipeline that stretches across northern Minnesota. The new line would be built along a different route, and would have the capacity to transport about twice as much oil as the current pipeline is allowed to carry (mprnews.org).

Canadian part of Line 3 Pipeline Replacement has been constructed

In December 2019 Enbridge announced that the construction of the CAD5.3-billion Canadian portion of the Line 3 Replacement Program is complete; the new Line 3 began commercial service in December 2019 (Enbridge press release).

A Minnesota State Court of Appeals ruled that the environmental assessment of Enbridge's Line 3 pipeline wasn’t good enough. The ruling is a reversal of Minnesota Public Utilities Commission’s decision that approved the environmental impact statement for the pipeline replacement. The appellate court found that the Commission erred when it approved the plan, and found that Enbridge’s environmental impact statement lacked in specificity, specifically where it deals with oil spills in relation to Lake Superior.

Enbridge is constructing the Line 3 pipeline using general corporate finance rather than project-specific loans. The financiers listed on this page have provided credit facilities or have underwritten bond issuances for Enbridge and are thereby supporting the Line 3 Replacement Project. As of November 2020, Enbridge has USD 12.87 billion in credit facilities.

In October 2017, Wells Fargo led a syndicate of more than a dozen banks in renewing a credit facility of USD1.48 billion for the company (Banking on Climate Change 2018).

In Enbridge's 2019 annual report it announced that the company "terminated certain Canadian and US credit facilities" and that it in 2019 had entered into:

Toronto Dominion Bank is lead agent on a CAD 2,975 million loan to Enbridge which will mature in March 2021.

"We owe it to future generations, to the Indigenous communities we've signed treaties with, and to every living being on this planet to stop building fossil fuel infrastructure."
2021-01-28 | Common Dreams
blog
external news
our news

Dear President Biden, An Indigenous Perspective on Your Inauguration

The Red Lake and White Earth bands filed suit, the second such filing in a week by pipeline opponents.
2020-12-30 | Star Tribune
blog
external news
our news

Not Just Another Pipeline

The expansion of Enbridge’s Line 3 pipeline is a breathtaking betrayal of Minnesota’s Indigenous communities — and the environment.
2020-12-28 | Louise Erdrich in the New York Times
blog
external news
our news

Five years since the Paris Agreement, are banks' 2050 pledges enough to reign in fossil fuel finance?

With New Equator Principles, Banks Fail to Act on Climate or Indigenous Rights

Another Oil Pipeline Blow As Court Rules Against Enbridge Line 3

Enbridge's Line 3 expansion is all risk, no reward

Minnesotans deserve an open and transparent process on Line 3

Minnesota tribes to hold their own Line 3 pipeline meetings

Erin Roth: Why we need to replace Enbridge Line 3

Memo from the Minnesota Environmental Partnership to Governors Walz, Flanagan and Sutton

Enbridge filed the Line 3 Replacement Program (L3RP) regulatory application with the National Energy Board (NEB) on November 6, 2014. On April 25, 2016, the NEB decided that the replacement program was in the Canadian public interest and subsequently recommended approval of the project to the federal Governor in Council.

The Canadian federal government announced its approval of L3RP on November 29, 2016. The construction of the pipeline began in Canada in mid-2017.

Since Enbridge's plans became public, concerns have been raised around both the construction of the new Line 3 and the abandonment of the old Line 3. Environmentalist, Native American groups and other landowners worry about devastating oil spills across important waterways, wetlands and sacred lands. Several groups have formed or took up the issue, including Honor the Earth, MN350.org and Friends of the Headwaters.

Enbridge fought the environmental review process every step of the way, leading to a courtroom battle that continues to this day.

The project received its certificate of need and route approval from the Minnesota Public Utilities Commission in June 2018. However, the resistance in Minnesota is fierce, resulting in the political players in the administration of Minnesota taking legal action against the state: the state’s Department of Commerce has appealed the decision by the Public Utility Commission to approve Line 3. In other words, the state is suing itself.

Three tribes along the proposed route remain explicitly opposed, as do a myriad of non-profit organizations, youth climate intervenors, landowners, and concerned citizens who are engaged in filing numerous lawsuits on the adequacy of the environmental impact statement, the route selected, and other matters. A detailed timeline can be found here.