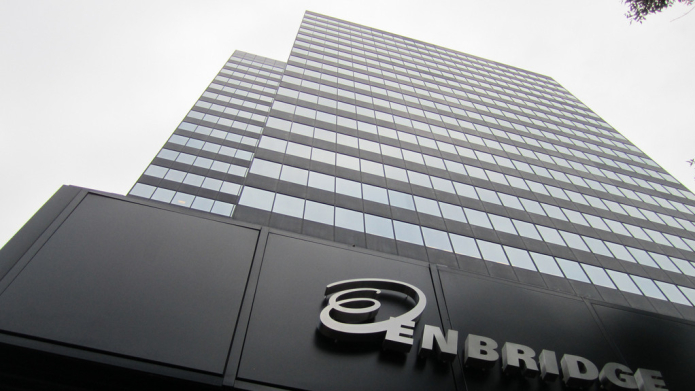 In February 2021, the Canadian midstream energy company Enbridge announced it had secured a USD 1.0 billion “Sustainability Linked” credit. Hiding behind laughable ESG goals, a company which specializes in the transportation of the most polluting fossil fuels uses so-called “sustainable” financial tools to help finance its new climate-destroying and rights-violating Line 3 pipeline. Financial institutions must stop being complicit in such shameless greenwashing.

When presenting the 2020 Financial Results of its company, Al Monaco, President and CEO of Enbridge boasted about what he called Enbridge’s “ESG leadership”. He took pride in underlining that the company was “the first” in its sector to launch a “Sustainability Linked credit facility”.

Indeed, on February 10th 2021, Enbridge secured a three-year USD 1.0 billion Sustainability Linked Credit Facility with CIBC, Scotiabank (Bank of Nova Scotia), Bank of Montreal (BMO Capital Markets), RBC Capital Markets and TD Securities. No surprise there: these financial institutions are also the five biggest funders of Enbridge: from 2016 to 2020 they dedicated USD 48.45 billion to the company – including USD 9.11 billion in 2020 alone.

Enbridge’s February operation was not done publicly. No document was published by the company to clearly describe how this credit is “sustainable”. The company limited itself to indicating that it incorporates its “ESG goals”.

In November 2020, Enbridge presented new ESG goals that include two environmental objectives regarding its direct GHG emissions (scope 1 and 2):

While these announcements may look good, they are in fact empty words which allow the company to continue to develop highly polluting projects and energies:

Looking closely at Enbridge’s climate plans, you will discover that it consists of building new pipelines and fossil gas distribution infrastructures. While the company likes to show off its renewable investments, the majority of the company’s 2020 growth projects are still related to oil and gas – which represent 82% of total estimated expenditures – and 97% of the companies 2019 investments where devoted to these energies.

Enbridge totally ignores the scientific studies which prove that fossil fuel production must be drastically reduced and suggests that generating slightly less GHG when transporting them is enough to align its operations with the Paris Agreement.

If Enbridge’s overall climate impact and empty climate commitment are reason enough to stop supporting the company and reject any “sustainable” or “green” funding, the company gives financial actors another reason to keep away: the Line 3 pipeline project in Minnesota. This pipeline will take oil from Canada’s tar sands region to Wisconsin, thus propping up the consumption and production of a fuel that emits 3.2 to 4.5 times more GHG than conventional oil.

Research have shown that overall credit facilities provide Enbridge with the liquidity that is necessary to carry out its fossil fuel infrastructure projects. In particular, general purpose funding can make up the funds which regulators require pipeline companies to have on hand in the event of an oil spill. In 2018, Enbridge used green bonds to finance renewable energy projects, thus freeing up capital to pursue other fossil fuel investments. The “sustainability linked” credit facility signed in February will be crucial for the massive Line 3 project.

After six years of opposition to the project by tribal nations and community environmental groups, Enbridge began construction in December 2020, despite COVID risks, legal challenges and sustained Indigenous-led opposition. This project is an environmental catastrophe: the construction would add 193 million tons of GHG to the atmosphere annually, annual emissions that are equivalent to 50 new coal plants. According to Honor The Earth, it also violates the treaty rights of the Anishinaabeg by endangering critical natural and cultural resources. Ironically, Enbridge’s ESG goals include contributing “to Indigenous reconciliation through employment strategies and training”.

Enbridge’s case should be a warning to all financial actors which truly want to support the goals of the Paris Agreement and all who support the development of “sustainable finance”. Yet, if Enbridge’s sustainability claims are shocking, it is not first-time companies from the oil and gas industry have relied on so-called “green” or “sustainable” bonds to find capital, and it won’t be the last. In December 2020, NRG was the first North American company to issue a sustainability-linked bond, despite the fact that the company has no plan to exit coal power generation that still account for 34% of its portfolio.

Financial regulators and political power must create and adopt strong requirements that bound companies to follow real Paris-Aligned alignment plans and turn financial flows away from climate-destructive projects and companies. In the absence of a regulatory framework that would force companies to truly act in a sustainable manner, it is the duty of financial institutions to carefully check any environmental claim and debunk greenwashing.