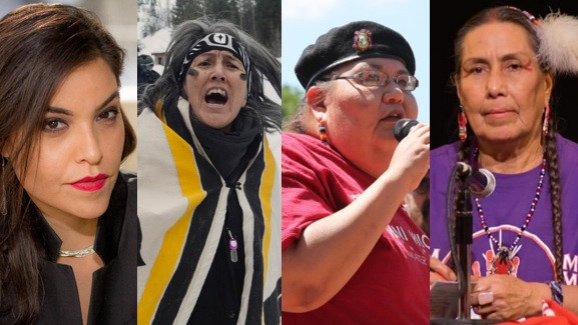 Following recent divestment advancements, a sixth Indigenous Women’s Divestment Delegation— infused with the spirit of their ancestors and unwavering determination to seek accountability and justice— will meet virtually with representatives from Deutsche Bank on July 16th, 2020. The Delegation will highlight human rights and Indigenous rights violations— sharing data, stories and calls for immediate action toward fossil fuel divestment and support of Indigenous self-determination and a just, clean energy future.

Despite purportedly high ethical and human rights standards and a commitment to sustainable financing, Deutsche Bank has provided over USD 68 billion in financing for companies active across the fossil fuel life cycle since the signing of the Paris Climate Agreement in 2016. This includes companies deeply involved in tar sands extraction, the most carbon-intensive fuels on the planet. Currently, Deutsche Bank is co-financing billions in corporate loans for the Keystone XL Pipeline, Trans Mountain Pipeline Expansion project, Coastal Gas Link Pipeline, and Line 3 Pipeline Replacement Project, all of which endanger human rights and neglect Indigenous People’s right to Free, Prior, and Informed Consent (FPIC) as outlined in the United Nations Declaration on the Rights of Indigenous Peoples. These proposed pipelines will go through Indigenous territories where many Indigenous peoples have not given consent for construction, a clear violation of FPIC that puts Indigenous communities at risk of further environmental and cultural injustice.

Indigenous and Black communities are disproportionately affected by ongoing extraction and the current coronavirus health pandemic. Fossil fuel companies are using this moment as an opportunity to push forward construction on pipeline projects, further exposing Indigenous communities to COVID-19 and environmental pollution. The companies are also moving forward with the development of ‘man camps’, which house pipeline workers from outside the community and have been directly linked with increased rates of drug use, sex trafficking and missing and murdered Indigenous women and girls. In addition to financing companies perpetuating violence against women, Deutsche Bank was recently fined USD 150 million by the New York State Department of Financial Services for its relationship with accused sex-trafficker Jeffrey Epstein, and the bank’s failure to conduct due diligence and monitoring to detect suspicious or unlawful activity.

The bold actions and advocacy of the Delegation comes on the heels of the cancellation of the Atlantic Coast pipeline, a major setback in the construction of the Keystone XL pipeline, and a federal court decision halting the flow of oil in the Dakota Access Pipeline (DAPL) due to the U.S. Army Corp’s failure to conduct an adequate Environmental Impact Study as required. As the pipeline shuts down, Reuters has reported that investors who own DAPL debt are now faced with DAPL's potential fate as a stranded asset.

Specifically, DAPL is the northern end of the DAPL/Bakken project, built at a cost of USD 4.8 billion. A project-specific loan covered USD 2.5 billion of that USD 4.8 billion. DAPL/Bakken’s owners — led by Energy Transfer, Phillips 66 (and joined by Marathon and Enbridge)— have paid off that loan, but the debt continues. In March 2019, the USD 2.5 billion project-level loan was converted into bonds by a syndicate of banks— Mizuho, MUFG, TD Bank, BBVA Securities, Crédit Agricole, Natixis, SMBC, Société Générale and SunTrust (now Truist Bank). Each provided the funds to pay off the USD 2.5 billion project loan in exchange for bonds, converting short-term debt into longer-term debt.

Reuters named three of the institutions that bought the new DAPL project-level bonds on the bond market since March 2019: Vanguard, JPMorgan Chase and BlackRock. Other notable owners of the new DAPL project bonds include TIAA-CREF, Prudential, PIMCO, iShares, Morgan Stanley, Wells Fargo and the Knights of Columbus.

This continued DAPL/Bakken financing illustrates how short-term debt rolls into longer-term debt, and how this debt is quietly whitewashed on markets. Banks take fees for the privilege of printing money. The remaining  USD 2.3 billion of the USD 4.8 billion DAPL/Bakken cost was financed using general purpose funds, such as Deutsche Bank has consistently provided to Energy Transfer. For recent deals, see:

Born from the DAPL resistance at Standing Rock, the Indigenous Women’s Divestment Delegation has advocated and informed financial institutions of their responsibility to end this financing pattern and their need to address risks to communities. The sixth Indigenous Women’s Divestment Delegation will bring this analysis to the discussion with Deutsche Bank as they request fossil fuel divestment.

Past Delegations have illuminated the power and potential for successful advocacy results. To protect human rights, the global climate, the health of communities, and the rights of Indigenous Peoples and Black communities experiencing the worst impacts of oil extraction and climate change, it is essential to center and hear the voices of those on the frontlines of systemic oppression and the climate crisis.

During the advocacy Delegation, Divest Invest Protect (DIP) and the Women’s Earth and Climate Action Network (WECAN) International will also highlight their continued support for the NODAPL political prisoners who are still incarcerated as a result of their human rights work and defense of water and climate.

The research from the Indigenous Human Rights Defenders and Corporate Accountability Program at the University of Arizona has been a supportive component to the Delegation’s efforts.

Members of the media are encouraged to reach out with any questions and interview requests. Spokeswomen biographies can be found at this link.

“Deutsche Bank has a moral obligation to be responsible in its investments especially when those projects impact Indigenous communities. They fund TC Energy's vanity project Keystone XL which goes about 1 mile south of the Cheyenne River Sioux reservation, my home. However, it crosses treaty territory which is stolen land by our oppressors, the colonizers. The United Nations says Indigenious people should have free prior and informed consent to projects like this. We have never given consent and have not engaged in consultation with TC Energy.  They must stop funding extractive industries that threaten the safety of Indigenous communities. They have funded KXL, a zombie pipeline we've killed before but keeps coming back thanks in large part to funders like Deutsche Bank and directly affect my lands, my people, our water. From mancamps close to our borders threatening the safety of our women as they have been proven to increase sexual assault cases, increased drugs and provoke racial attacks on our people. Our water is being threatened, our sensitive prairie ecosystem, and endangered species, and our traditional medicines and food we still gather. I know these banks twist words around and say they aren't responsible for what companies do yet they honestly do have a moral obligation to educate themselves as to what their money funds. TC Energy is no friend to Indigenous people.” Joye Braun Wanbli Wiyan Kawin, Cheyenne River Sioux Tribe, Community Organizer, Indigenous Environmental Network.

“With TC Energy’s Keystone XL pipeline, Deutsche Bank stands in the shameful shadow of its violations against Indigenous Rights, Human Rights and the Rights of Nature. By continuing to finance the extractive industries' attempt to exploit Indigenous People and erode their inherent sovereignty by ignoring our right to free, prior and informed consent, Deutsche Bank places itself in the midst of a fight it cannot and will not win. It should be obvious to the most uninformed observer that the fossil fuel abusers time has passed and the way forward is through renewable energies. The Indigenous People have gathered and counseled about these many proposed pipelines that are financed by Deutsche Bank and have vowed to unify and hold their ground just as the Dog Soldiers did when they placed their lance in the Mother Earth and said ‘We will defend until…’. Divestment is the only answer that we will accept from Deutsche Bank. The very future of Life as we know it is at stake." Casey Camp Horinek, Ponca Nation, long-time Native rights activist, Environmental Ambassador, and WECAN Board Member.

"Right now the root of all evil is money. these corporations, what they have should be enough, but it is not enough for them, what they want is more, more, more, more; and that is what is destroying the planet and that is what is destroying everything. They set up a system that has become very corrupt and they try to cover up everything that they did wrong and still try to push forward. There is no money to be made in LNG and fracked gas...we have to do the protecting now, or else Mother Earth will fight back, and all of us will have to pay." Freda Huson, Unist’ot’en – Wet’suwet’en People, leader and spokesperson for the Unist’ot’en camps, quoted during WECAN International's 'Indigenous Women of North America, Turtle Island on the Frontlines:COVID-19 & Fossil Fuel Resistance' webinar.

“For four long years our program has appealed to financial actors like Deutsche Bank to end its business relationship with companies like DAPL, due to human rights violations and lack of permitting. As the US court now orders DAPL to shut down, the bank can no longer deny or skirt around that truth. The due diligence of Deutsche Bank is clearly inadequate, failing to require its companies to conduct even basic Environmental Impact Study required by law and international standards. Deutsche Bank has the duty to protect, respect, and remedy adverse impacts associated with investments, their business partners, and business relationships; this duty and human rights responsibility cascades and flows throughout the supply chain. Deutsche Bank must cease business with companies or non-state actors that target and criminalize Indigenous peoples subjecting them to police violence for exercising fundamental human rights and first amendment activity in opposition to extractive industries financed by Deutsche Bank. We have a clear message for the people of Germany, join and stand with us to fight for racial justice for Indigenous peoples and climate justice through financial accountability! In the same way DAPL was brought down so too will KXL and CSL! Wir haben Rechte, Wasser ist Leben! We have rights! Water is Life!” Michelle Cook, Diné, Founder Divest Invest Protect, Founder and Co-Director Indigenous Women’s Divestment Delegations.

“As a lead financier of the fossil fuel industry in Europe, Deutsche Bank must be accountable to activities of the companies they finance regarding further destruction of the climate, the violation of Indigenous Rights, escalating harms to public health during a pandemic, and increased rates of violence toward Indigenous women living near ‘man camps’ associated with pipeline construction. WECAN stands with Indigenous women leaders as we advocate for fossil fuel divestment to protect the water and climate, and the health and survival of Indigenous communities. We are calling for Deutsche Bank to stop its business relationships with corporations that are violating human rights, criminalizing water and land protectors, attempting to bypass proper environmental reviews and are furthering climate disruption. As multiple crises in 2020 proliferate, business as usual must not and cannot continue. Now is the time for financial institutions to firmly move towards a clean, just, and healthy future for all. There is no time to lose!” Osprey Orielle Lake, Founder, Women’s Earth and Climate Action Network (WECAN) International and Co-Director, Indigenous Women’s Divestment Delegations.