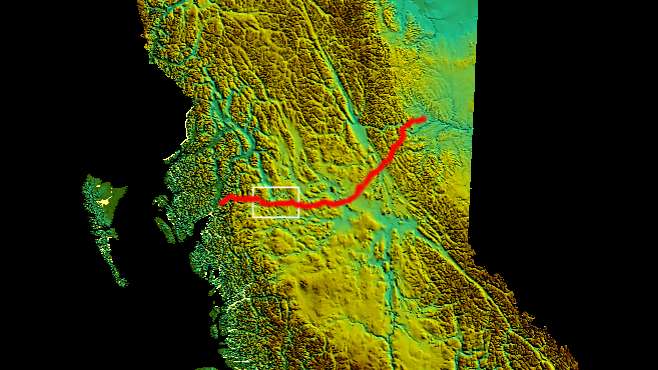 Construction comes to a halt due to non-compliance

The Coastal GasLink pipeline that is currently under construction is heavily opposed by the Indigenous Wet'suwet'en Nation, whose land, water and community will be threatened by the pipeline's construction. New pipelines such as these are also incompatible with achieving the goals of the Paris Climate Agreement.

This project is also part of BankTrack's Tracking the Equator Principles campaign.

Banks that finance the Coastal GasLink pipeline, either directly or indirectly, are facilitating Indigenous rights violations as well as environmental harm. Banks should refrain from financing the project itself as well as the companies behind it.

In the 1997 case Delgamuukw v. British Columbia, Canadian courts recognised that the hereditary chiefs are the title holders over the Wet'suwet'en nation's traditional lands, and thus have the authority and jurisdiction to make decisions about the lands. However, in order to get consent, the federal and national governments ignored the hereditary chiefs. Instead they went to the band councils who, according to the Delgamuukw case, do not have authority off-reserve.

In February 2020, following widespread solidary protests, a Memorandum of Understanding (MoU) was drafted by the Wet'suwet'en, provincial and federal governments. While the MoU recognises the authority of the hereditary chiefs, it does not address or resolve the dispute over the Coastal GasLink pipeline.

Environmental Assessment Certificate In February 2020, the hereditary chiefs of the Wet'suwet'en nation filed an application to the British Columbia (B.C.) Supreme Court, requesting a judicial review of the decision made by the Environmental Assessment Office (provincial agency that assesses major development proposals in British Columbia) to grant an extension to the Environmental Assessment Certificate for the Coastal GasLink pipeline. The chiefs argue that the extension, which was granted in October 2019, should not have been granted based on Coastal GasLink's non-compliance with the conditions of its permits (read more under 'environmental issues') as well as the findings of Canada's National Inquiry on Missing and Murdered Women (read more under 'gender aspects').

Covid-19 While British Columbia extended its state of emergency, pipeline construction is allowed to continue as it is classified as an essential service by the provincial government. It is reported that even though there are less workers on-site, the workers remain in close proximity. The situation has caused fears of an outbreak. An article published on Ricochet explains how some Indigenous people are reminded of "the darkest episodes of North America’s violent colonial legacy, including the 1837–38 smallpox epidemic caused by infected blankets that white settlers gave to unsuspecting Native Americans.'' Makwala Smith, a protestor against the relevant legislation said: ''If our isolated communities start getting infected by the virus because of the coming and going of police and CGL workers, this would mean the continuation of the cultural genocide brought upon by racist attitudes and decades of colonialist policies that have been imposed on our people.'' In December 2020, a COVID-19 outbreak was reported in two accommodation sites for workers, infecting 27 people, who are said to have transmitted the virus in and between the sites. This further highlights the lack of safeguards that TC Energy has in place to curb the spread of the virus and protect its own workers.

Industrial work camps Besides Coastal GasLink's noncompliance with conditions set out in its initial Environmental Assessment Certificate, in its application to B.C. Supreme Court the hereditary chiefs point to the results of an inquiry into the cases of Missing and Murdered Indigenous Women and Girls. The inquiry found that there is ''substantial evidence that natural resource projects [like Coastal GasLink] increase violence against Indigenous women and children and two-spirit individuals'' through the creation of 'man camps'. The inquiry calls for the ''government to do gender-based analysis of the impact of new resource projects''. According to the Wet'suwet'en, Coastal GasLink's 'Social and Economic Effects Management Plan' falls short and does not include such an analysis.

Health issues Physicians in Dawson Creek (where the natural gas that Coastal Gaslink will carry is fracked) recently warned of health issues related to fracking activities after seeing patients with symptoms they could not explain. These symptoms include nosebleeds, respiratory illnesses and rare cancer types which can be attributed to highly toxic chemicals like benzene, toluene, 2 butoxyethanol and heavy metals which seep into drinking water as a result of fracking.

Violations of environmental conditions According to the hereditary chiefs, Coastal GasLink does not comply with the conditions set out in the initial Environmental Assessment Certificate of 2014. In its inspection reports, the Environmental Assessment Office notes dozens of violations by Coastal GasLink in 2018 and 2019. The violations range ''from blocking Indigenous people from accessing their traplines to missing deadlines on commitments to conserve caribou and endangered plants''. In June 2020, the Environmental Assessment Office of British Columbia found that TC Energy had cleared a large stretch of protected wetland areas for construction without proper surveying and planning. These wetlands are of cultural and ecological importance for the Wet'suwet'en and also serve as habitats for various species at risk and many fish species, which have not been taken into account while determining the adverse impact of the Gaslink pipeline. Due to this, more than 42 wetlands have already been affected from the construction procedures and if the construction goes on without the development of site-specific mitigation strategies, more than 300 protected wetlands will be affected.

Climate change It is expected that the Coastal GasLink pipeline will transport up to five billion cubic feet of natural gas every day when in operation. When burned, this natural gas is equivalent to the emission of 585.5 million pounds of CO2 every day. This corresponds to approximately 13% of Canada's daily greenhouse gas emissions in 2017. In general, all development of untapped fossil fuel sources is incompatible with the Paris climate agreement. Analysis by Oil Change International shows that the currently developed fossil fuel reserves for gas, oil and coal are already double the remaining carbon budget for a 50% chance of staying below 1.5°C of global warming.

An article published by Canada's National Observer in June 2020 report that the Canadian government is undermining its own climate goals by supporting pipeline projects such as the Coastal GasLink pipeline.

Pollution The Coastal GasLink pipeline will carry gas fracked from the Montney Shale Formation. Hydraulic fracturing, or fracking, is the technology being used to develop unconventional hydrocarbon reservoires. Scientific research shows that the employment of fracking negatively impacts public health, water, soil and air. The technique makes use of several dangerous chemicals that are released during the process causing pollution.

Diesel spills In June 2020, The Tyee reported that two fuel spills occurred on Wet'suwet'en territory. Both of the spills caused 500 litres of diesel to leak into the ground. One of the spills occurred at the Community-Industry Safety Office of the Royal Canadian Mounted Police (RCMP), which was set up to patrol pipeline protests in the area. The second spill occurred at a work camp for the Coastal GasLink pipeline. Both of these spills were not reported to the hereditary chiefs until days after the fact.

Environmental and Social Management Policy for Financing and Investment Activity

Code of Business Conduct and Ethics

Construction comes to a halt due to non-compliance

In June 2020, due to non-compliance with management and survey guidelines, the Environmental Assessment Office ordered TC Energy to cease all construction operations within 30 meters of wetland areas that were designated as socioeconomically important, until a proper survey and planning is undertaken by the company.

In May 2020, it was reported that TC Energy (the company which previously fully owned and operated the project through its subsidiary TransCanada Pipelines) secured project financing for the Coastal GasLink pipeline. The project finance is estimated to cover up to 80% of the project costs. See below for the banks and financial institutions that provided this debt. Besides project finance, five commercial banks (Royal Bank of Canada, Bank of Montreal, Scotiabank, CIBC and TD Bank) have provided Coastal GasLink with working capital.

The remaining costs will be provided through equity by TC Energy. More information on who finances TC Energy can be found on the company's profile.

Note: Sumitomo Mitsui Trust Holdings is listed as a financier by IJGlobal, but not by Bloomberg.

Initially, the Coastal GasLink pipeline project was fully owned by TransCanada Pipelines, a 100% subsidiary of TC Energy - which is also behind the controversial Keystone XL tar sands pipeline. In December 2019, KKR and AIMco bought a 65% stake in the Coastal GasLink project.

NAB targeted by Indigenous group over stake in Canadian pipeline

Canada is burning, and our banks are fanning the flames

One of the world’s leading human rights bodies calls for work to stop on Coastal GasLink pipeline, Trans Mountain pipeline and Site C dam, saying Canada is failing to comply with international law
2021-01-15 | The Narwhal
blog
external news
our news

RCMP have no reason to carry assault weapons or even be at the newly constructed smokehouse, say spokespersons
2020-06-29 | The Tyee
blog
external news
our news

Coastal GasLink pipeline construction continues during pandemic — and so does resistance

The Pipeline and the Pandemic: ‘The Biggest Risk We’ve Got Right Now’

Understanding the Wet'suwet'en struggle in Canada

Take the Pledge: We Pledge to Stand with Unist'ot'en

In 2012, TC Energy announced that it was selected by Shell Canada and partners to design, build and own the Coastal GasLink pipeline. Two years later, Coastal GasLink obtained the Environmental Assessment Certificate for its project. Attached to this certificate were 32 legally-binding conditions for Coastal GasLink to fulfil. These included the conditions to avoid caribou habitats and to continue consultations with Indigenous groups.

In May 2016, Coastal GasLink announced that it obtained all of the provincial regulatory approvals required for the pipeline and in September 2019, construction of the Coastal GasLink pipeline started.

In October 2019, the Environmental Assessment Certificate was extended for another five years.

In December 2019, it was announced that KKR and AIMCo bought a 65% stake in the Coastal GasLink pipeline.

After an injunction creating ''an exclusionary zone against those [...] who would interfere with the pipeline’s construction'' was granted by the British Columbia Supreme Court in December 2019, police started to arrest the people that were blocking construction sites on the Wet'suwet'en lands. These arrests sparked protests to erupt across Canada in solidarity with the Wet'suwet'en struggle against the pipeline in February 2020.

At the end of February 2020, a meeting of three days was set between the hereditary chiefs and provincial and federal governments. During these talks, an agreement was reached regarding the Wet'suwet'en land rights and governance. The agreement did not include an agreement regarding the Coastal GasLink pipeline itself. Nevertheless, construction work of the pipeline resumed.

At the end of March 2020, hereditary chiefs called upon the provincial and federal governments to halt construction work, as the activities would heighthen the risk of transmission of Covid-19. This call was not answered. Despite British Columbia's state of emergency, pipeline construction - classified as an essential service by the provincial government - is allowed to continue.

By May 2020, clearing of the route of the pipeline was nearly completed.