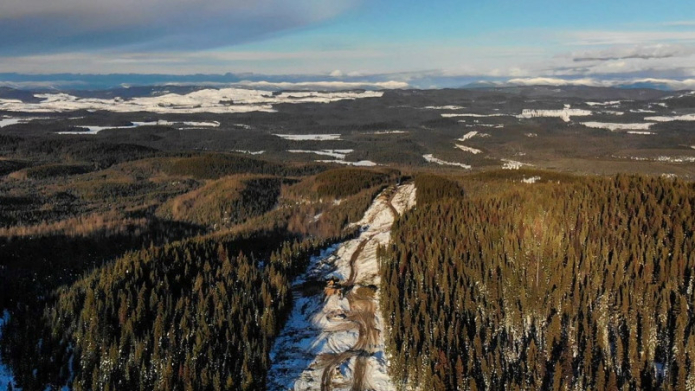 The Gidimt’en Checkpoint from the Wet’suwet’en Nation — the same Nation whose protests sparked rail blockades across Canada in 2020 — issued a letter today to over 35 Coastal GasLink (CGL) investors and banks in Australia, Canada, China, Germany, Japan, Malaysia, the Netherlands, Singapore, South Korea, and the United States. The letter demands investors and banks — including JP Morgan Chase, Citibank, RBC, Scotiabank, BMO, Royal Dutch Shell, and CaixaBank — cease and withdraw all support from Coastal GasLink and LNG Canada and highlights how financing the project violates Indigenous rights and breaks any investor commitments to racial justice, reconciliation, and social responsibility.

Coastal GasLink is a proposed 670-kilometer-long pipeline that would carry fracked gas from northeast BC to a future liquefied natural gas terminal on the coast, LNG Canada, the largest of its kind ever proposed in Canada.

Endorsed by over 100 organizations around the world, the #DivestCGL campaign mirrors the pressure tactics which led to 16 insurance companies dropping the Trans Mountain (TMX) pipeline project.

The Coastal GasLink pipeline violates Wet’suwet’en rights and title, and lacks consent of Wet’suwet’en Nation hereditary chiefs. The 37 investors and banks targeted by the campaign include Canada’s Big 5 Banks, which last month issued statements committing to justice for Indigenous peoples. RBC sponsored Truth and Reconciliation Week, which included broadcast programs on the Truth and Reconciliation Commmission’s calls to action. One of these calls is for corporations to commit to meaningful consultation and building respectful relationships with Indigenous peoples before proceeding with economic development projects. Against the backdrop of the banks’ recent public commitments to reconciliation, the banks’ hypocrisy in financing Coastal GasLink is especially striking.

“Reconciliation isn’t financing a project that’s destroying our land, without our consent. Coastal GasLink has not engaged in respectful consultation with us. Backing this project implicates investors in perpetuating violence to our land and on my people,” says Molly Wickham, Gidimt’en, Wet’suwet’en Nation, Hereditary name Sleydo’. “If investors are serious about their commitments to social responsibility and racial justice, they must commit to not financing projects that threaten Wet’suwet’en sovereignty, violate our land and sacrifice our future. Otherwise, when companies talk of reconciliation, it’s just empty promises — and we’ve had more than enough of those already.”

“At what point do corporations, which are made up of people, begin to act like fellow human beings who drink water? How much more of the world needs to burn and how many more gross human rights violations are tolerable by actors engaged in investments that steal life from future generations? Accountability and oversight are more than owed for such reckless behavior, at this point in the climate crisis,” says Tara Houska, Couchiching First Nation, founder of Giniw Collective. “We stand in solidarity with Wet’suwet’en land defenders protecting the sacred and standing up to corporate greed.”

“New fossil fuel projects are not only inconsistent with the Paris Agreement, they are risky investments because they will inevitably become stranded assets as the world shifts to renewable energy,” says Rob Henderson, former Chief Economist, Markets at National Australia Bank, one of Coastal GasLink’s investors.The Australian economics and finance consultant adds, “Financing Coastal GasLink is a huge backwards step for National Australia Bank and a real blow to the bank’s standing with the increasingly influential Corporate Social Responsibility investment community, both because it is a fossil fuel enabling development, and also that it is in direct conflict with the wishes of local Indigenous people."

“This pipeline isn't about the so called “safe” transportation of a necessary product its the final gasp of a dying industry desperately trying to perpetuate fossil fuel use in a society that knows its past time to to make better choices for energy use, “ said Amy Gray, Senior Climate Finance Strategist at Stand.earth. “All pipelines leak and they wreak havoc from the extraction through the route of the pipeline all the way to the communities who live in the shadow of the refineries. It’s time to stop funding these dangerous pipelines and respect Indigenous sovereignty, frontline communities and re-invest in a just and equitable transition to renewable energy.”

The Coastal GasLink project is at the centre of a high-profile conflict over Wet’suwet’en land rights. On January 4, 2020, Wet’suwet’en Hereditary chiefs served an eviction notice to Coastal GasLink for proceeding to construct the pipeline without their consent, which was ignored by the company. Shortly after, the Royal Canadian Mounted Police (RCMP) conducted a five-day military raid on resistance camps, violently evicting land defenders. This set off nationwide solidarity protests and railway blockades, delaying shipping traffic for weeks and garnering global media attention.

"Corporations need to step up and deliver on their commitments to social responsibility. Banks and investors need to stop financing fossil fuel projects that violate the rights and sovereignty of Indigenous people for their own financial gain," says Mary Lovell from Rainforest Action Network. "Global investors are due for a moment of reckoning, as they face increasing resistance to these toxic projects that harm communities. Climate justice is racial justice, and these corporations are being held accountable for their actions.

Endorsed by 100+ organisations (including BankTrack). For the full list see here.