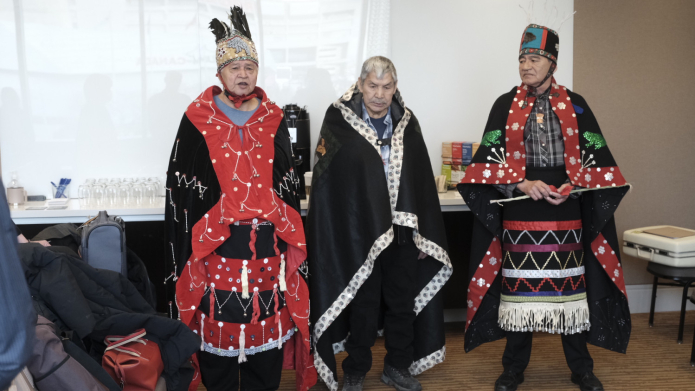 At the conclusion of the meeting, Wet’suwet’en hereditary chiefs spoke at a rally organized by youth advocates and Wet’suwet’en supporters featuring art, and a speak-out. Photo: Joshua Best

Despite abruptly canceling the in-person portion of their  annual general meeting (AGM) today, the Royal Bank of Canada (RBC) faced growing calls to phase out coal, oil, gas, and tar sands funding, and instead invest in a safe, and renewable future.

Wet’suwet’en Hereditary Chiefs and climate finance experts asked the RBC Board and management about their role in violating Indigenous rights by bankrolling projects that perpetuate genocide against Indigenous Peoples, such as the Coastal GasLink pipeline, as well as the role of RBC’s fossil fuel financing contributing to the climate crisis. Melina Laboucan-Massimo, the co-founder of Indigenous Climate Action, spoke to  shareholders about how RBC’s financing of the tar sands has detrimental impacts to her homelands, the health of Indigenous people on their territory and to the climate.

"By financing the Coastal GasLink pipeline, RBC is choosing to bypass our right to free, prior, and informed consent and instead justify police violence against unarmed Wet’suwet’en people to push the project through.” said Sleydo’, Spokesperson for Gidimt’en Checkpoint “As an Indigenous woman, I have experienced violence by militarized RCMP to forcibly remove me from my own territory, criminalize me, and jail me. RBC is willing to risk the killing of unarmed Wet’suwet’en people by police to push this project through sovereign lands.”

While RBC rejected a key climate resolution on a technicality, one that would end fossil fuel finance for expansion, Canada’s top fossil bank faced shareholders on 3 key climate resolutions. More than CAD 15.4 billion worth of shares voted in favour of a resolution to more strictly define RBC’s sustainable finance to exclude fossil fuels, CAD 11.5 billion voted in favour of limits on engaging in privatization of pollution intensive industries and CAD 38.3 billion in favour of the board putting forward its own climate plan for shareholder approval in the future.

At the conclusion of the meeting, Wet’suwet’en hereditary chiefs spoke at a rally organized by youth advocates and Wet’suwet’en supporters featuring art, and a speak-out. This happened in coordination with dozens of events across Canada.

Despite public climate commitments, Indigenous reconciliation statements, and net-zero rhetoric, RBC has doubled down on fossil fuel financing to the tune of CAD 263 billion since the Paris Climate Agreement was adopted, ranking as the world’s fifth largest fossil bank and Canada’s #1 fossil fuel financier. Canada’s major banks grew support for the fossil sector by 70% in 2021, including alarmingly increasing tar sands financing by 51% to CAD 21 billion, with RBC leading the pack at CAD 6.81 billion.

With an estimated CAD 6.6 billion price tag, RBC is the top commercial bank providing the Coastal GasLink pipeline with working capital, while acting as financial advisor for the pipeline, despite lacking consent from Wet’suwet’en Hereditary Chiefs. Amidst imminent drilling preparation under the sacred Wedzin Kwa river, over 65 Hollywood stars called on RBC to stop financing the pipeline, and end fossil fuel finance once and for all.

At a February 25 landmark meeting between Wet’suwet’en Hereditary Chiefs and RBC executives, Chiefs closed with a gut wrenching video of the years of police violence, arrests, raids, and harassment which continues to this day. The RBC-financed Coastal GasLink pipeline has brought a rise in police violence against Indigenous land and water defenders, with Canadian federal police spending topping CAD 21 million in Wet’suwet’en territory alone.

In addition to Coastal GasLink, RBC is pouring millions into Russian oil and gas corporations,  including Russian-oligarch controlled Evraz which is producing steel for the pipeline.

"RBC increasing fossil fuel finance over the last year makes its climate rhetoric without actual follow-through just more hot air. Despite record-setting shareholder support for climate action, we are incredibly disappointed that RBC is choosing to light our future on fire instead of being a climate champion," said Sarah Beuhler, Stand.earth Senior Climate Finance Campaigner.

In the weeks and months ahead, creative actions and solidarity events with Wet’suwet’en land defenders will increase public pressure on RBC throughout the Spring and Summer.