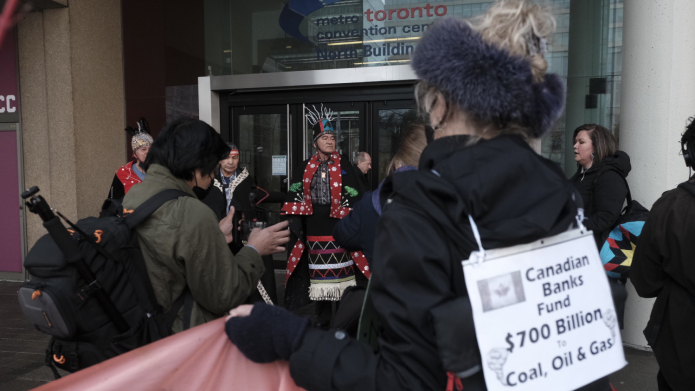 A delegation of Wet’suwet’en Hereditary Chiefs proceeded with a march and rally from the Metro Convention Centre, original site of the in-person meeting, to RBC headquarters at 200 Bay Street. Photo: Joshua Best

In the face of growing opposition to the Royal Bank of Canada (RBC)’s financing of fossil fuel projects including the Coastal GasLink fracked gas pipeline, Canada’s largest bank canceled the in-person portion of their annual shareholder meeting less than 24 hrs before it was scheduled. A delegation of Wet'suwet'en Hereditary Chiefs announced they were attending the meeting on Wednesday and traveled from British Columbia to attend. The meeting was canceled shortly after, with RBC claiming a COVID outbreak amongst key personnel. Canada’s second largest bank, Scotiabank, held their shareholder meeting on Tuesday, despite their CEO contracting COVID and unable to participate.

“This doesn’t seem like a coincidence,” said Sleydo’, Spokesperson for the Gidimt’en Checkpoint who traveled from the Yintah, the Wet'suwet'en traditional territory, to attend the meeting. “RBC has a track record of ignoring our concerns, and the criticism of shareholders and customers. It seems like they don’t want to answer for their financing of the rights-violating Coastal GasLink fracked gas pipeline and to face us in person.”

RBC already rejected, based on a technicality, a shareholder resolution that would end its financing of companies expanding fossil fuel infrastructure. The bank still faces three other climate resolutions at Thursday’s AGM. Despite claiming to take the climate crisis seriously and respecting Indigenous rights, RBC has doubled down on fossil fuel financing. RBC is currently the world’s fifth largest fossil bank and Canada’s #1 fossil fuel financier. The bank has financed more than CAD 263 billion in coal, tar sands, oil and gas deals since 2016.

“The one chance we have to address, in person, the CEO, board directors and shareholders, they conveniently make the meeting remote. But it does not stop us from telling our truth and it will strengthen our voices. They can no longer plead ignorance to our existence and opposition to their continuing financial support of such destructive and rights violating projects,” said Hereditary Chief Na’Moks. “We will not be silenced.”