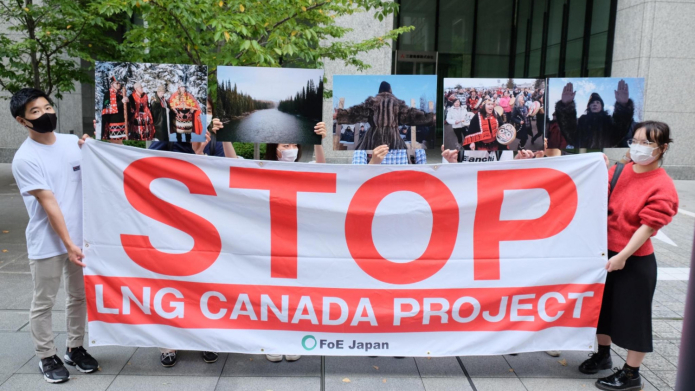 The Japan Bank for International Cooperation (JBIC), a public financial institution fully owned by the Government of Japan, announced in a press release today that it has decided to provide up to US $850 million for the LNG Canada Project (1).

The decision by JBIC ahead of the 26th session of the Conference of the Parties (COP 26) to the United Nations Framework Convention on Climate Change (UNFCCC) starting from the end of this week in Glasgow, England, goes against the call by the UK government to stop public financing for fossil fuels (2), and shows that Japan's approach to climate change is still far from that of the world. It is inevitable that Japan will once again become the target of criticism from the international community. Serious violations of Indigenous Peoples have also been pointed out in an associated project of the LNG Canada project. We strongly condemn JBIC's decision to provide financing, disregarding the impact on climate change and the human rights of Indigenous Peoples, and call on involved operators and financial institutions to immediately withdraw from the project.

The LNG Canada project plans to liquefy shale gas extracted from Montney, British Columbia and transported through its 670 kilometer Coastal Gaslink pipeline to Kitimat. The gas will then be exported to the Asian market. Investors include Mitsubishi Corporation and Royal Dutch Shell. JBIC plans to provide US$1.85 billion in co-financing for the project with private financial institutions. It is not clear which private financial institutions are co-financing the project, but Japan's three largest banks, Mizuho Bank, Sumitomo Mitsui Banking Corporation and MUFG Bank, have already provided financing for the Coastal GasLink pipeline project, and therefore it is likely that they are also involved in the LNG Canada project.

The Paris Agreement, an international treaty on climate change, sets a goal of limiting global average temperature increase to 1.5 degrees Celsius, and to achieve this goal, global greenhouse gas emissions must be reduced to net zero by 2050. A report released in May by the International Energy Agency (IEA) called for an immediate halt to new investment in all fossil fuels to achieve net-zero emissions by 2050 (3), making it clearer than ever that we need to end public finance for fossil fuels. In addition, the LNG Canada project is scheduled to start operating from 2024 for 40 years, meaning that it will produce liquified natural gas (LNG) after 2050. This is a clear violation of the Paris Agreement.

In addition to its climate impacts, serious human rights violations against Indigenous Peoples have been reported in an associated project of the LNG Canada project, the Coastal GasLink pipeline project. The Coastal GasLink Pipeline Company is now pushing ahead with the construction, ignoring the rights of the Wet'suwet'en First Nation. Wet’suwet’en, which is directly affected by the Coastal GasLink pipeline project, has never given up their land, and in 1997 the Supreme Court of Canada ruled that the ownership and use of land belong to Indigenous Peoples (Delgamuukw case) (4).

On December 13, 2019, the UN Committee on the Elimination of Racial Discrimination also adopted a resolution calling on the federal government to immediately halt the Coastal GasLink pipeline project, the Trans-Mountain pipeline project and the construction of Site C Dam until a "Free prior, and informed consent (FPIC)" obtained (5). In other words, it has been pointed out internationally that FPIC has not been obtained for the associated project of the LNG Canada project, and the JBIC's decision to finance the project clearly violates the JBIC Guidelines for Confirmation of Environmental and Social Considerations which requires to obtain FPIC from Indigenous Peoples.

The Equator Principles, which are signed by private banks, also call for projects to obtain FPIC from Indigenous Peoples and comply with "the rights and protections for Indigenous Peoples contained in relevant national law, including those laws implementing host country obligations under international law" and the decision to provide financing for this project clearly goes against this. Wet'suwet'en and more than 100 other organizations around the world just submitted a request letter on October 19 to investors and financial institutions, including Japan's three largest banks, to divest from and stop financing the Coastal GasLink pipeline project and the LNG Canada project.

We strongly urge JBIC and private financial institutions involved in the project to immediately withdraw their financing to the project, and urge Mitsubishi Corporation to withdraw from the project.

Pipeline Transportation of Natural Gas
There are no projects active for this item now.
on record