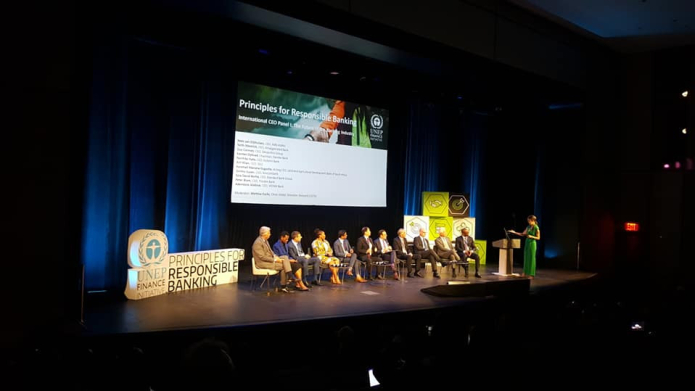 As the UN Principles for Responsible Banking (PRB) marks its one-year anniversary, a review of signatory banks’ financing shows that PRB banks are far from their stated goals. Twenty PRB banks alone are responsible for over US$1.2 trillion in loans and underwriting to fossil fuels from 2016-2019 and are among the largest global financiers of fossil fuels, and the 20 PRB banks most exposed to forest-risk commodities have provided over $52 billion in loans, underwriting, and investments from 2016-2020Q1 to commodities driving deforestation. The majority of these banks are failing to disclose these impacts, and total financing is on the rise in recent years.

First launched by 132 banks on September 22, 2019 –– during NYC Climate Week –– now 187 banks and counting have signed on. PRB banks have committed to assess the impacts of their financing and align their business strategy and practice with the Paris Climate Agreement and the Sustainable Development Goals (SDGs).

Civil society groups have welcomed the Principles, but warned of the risk of greenwashing and called for banks to ambitiously implement the Principles in order to make concrete change. PRB banks must align their financing with the recently launched Principles for Paris Aligned Financial Institutions, by ending finance for fossil fuels, deforestation and land degradation, as well as activities that facilitate human/Indigenous rights violations.

“When the climate and biodiversity are nearing a breaking point, and when a record number of land and environmental defenders are being killed, PRB banks are still pumping billions of dollars into fossil fuels and deforestation-linked commodities, while touting their green credentials. If this initiative is to have any significance, we must see change now,” said Hana Heineken, Senior Campaigner, Rainforest Action Network (RAN).

‘’As the world has already crossed the 1°C level of global warming, and the impacts of the climate crisis on people and planet continue to intensify, time is running out. We urge PRB banks to set meaningful targets as soon as possible, and to be transparent about their progress towards reaching these. Enabling external scrutiny is a prerequisite for the Principles to be effective.,’ said Daisy Termorshuizen, Climate Campaigner and PRB Campaign Coordinator, BankTrack.

“Indigenous peoples are seeking basic accountability for indigenous human rights violations emerging from extractive industries backed by banks and financial institutions. The PRB banks have a role and responsibility in protecting indigenous peoples right to Free, Prior and Informed Consent, and providing remedy for abuses they contribute to through their business relationships. Time will tell whether the PRBs will live up to its promises in aligning with the Paris Climate Agreement and the SDGs (Sustainable Development Goals). As deadly infernos rage in the Western United States and the skies turn red blotting out the sun, the magnitude of climate change is written across a burning atmosphere for all to see. We don’t have time for hesitation from the PRBs,” said Michelle Cook, Founder, Divest Invest Protect.

“The Amazon – one of the most critical ecosystems to maintain climate stability and home to hundreds of distinct Indigenous nations – is fast nearing a tipping point, after which it will no longer be a rainforest. Yet PRB banks continue to finance the expansion of oil drilling and agribusiness there, running roughshod over Indigenous rights and ignoring climate impacts. PRB banks need to take meaningful action before it’s too late for the Amazon and the entire planet,” said Moira Birss, Climate and Finance Director, Amazon Watch.

“We have yet to see the level of commitment and urgency from the PRB banks that addresses the gravity of the climate crisis, deforestation, and lack of respect for Indigenous rights. The world is on the brink of ecological collapse, yet PRB banks continue with incremental changes. Time is running very short for the PRB banks to adhere to the Paris Climate Agreement and uphold human and Indigenous rights as they continue to finance the fossil fuel industry, the destruction of forests and vital biodiverse ecosystems. What is needed now is rapid divestment from fossil fuels, and deep investment in renewable and regenerative energy,  and community-led solutions,” said Osprey Orielle Lake, Executive Director, The Women’s Earth and Climate Action Network (WECAN) International.

“How can banks celebrate the Principles for Responsible Banking and yet continue ignoring community concerns? We, the community of Lamu, have tried to reach out to ICBC many times since 2016 over the proposed 1050 MW Lamu coal power plant without response. Why should banks invest in projects that are worsening climate change, destroying community natural marine resources, and putting the lives of people at risk?” said Khadija Shekuwe, Coordinator, Save Lamu.

Pulp, Paper and Paperboard Mills
There are no companies active for this item now.
on record