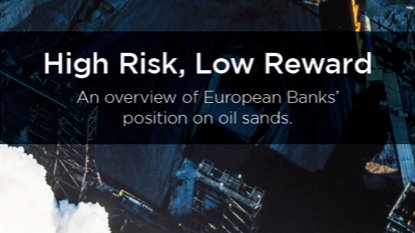 New research from ShareAction shows that despite the urgent need to phase out carbon-intensive oil sands production, many European banks retain significant involvement in the sector and have “weak and ineffective policies” for phasing out oil sands finance.

Barclays, HSBC, and Credit Suisse are among the worst offenders, as the only European banks to have continued participating in debt financing deals with Canadian upstream players since the signing of the Paris Agreement. All three banks also fund TC Energy and Enbridge, the two companies building the controversial Keystone XL and Line 3 Replacement pipelines.

Barclays and Credit Suisse were found to have two of the weakest policies, with no corporate or asset-level exclusions on oil sands finance (see table).

Barclays has described its exposure to oil sands as a “very small business” with just £20 million of revenue generated in 2019, representing approximately 0.1 per cent of its total revenue. But ShareAction said this “does not give an idea of the underlying credit risk nor the magnitude of the bank’s historical support to the oil sands sector… Barclays has provided USD 3.2 billion of oil sands financing since the signing of the Paris Agreement, a significant source of support for an otherwise failing sector. The rationale to maintain an exposure to a sector that represents a marginal part of its revenues is unclear considering the potential downside in terms of reputational risk, giving the impression the bank is picking up pennies in front of a steamroller."

Xavier Lerin, senior banking analyst at ShareAction also highlighted the incompatibility of Barclays’ oil sands finance with its ambition to be a net zero bank, noting that:
Since its net zero announcement in March, Barclays has participated in 11 loan and bond deals to major tar sands companies, including infrastructure companies building out extra pipeline capacity.”

These 11 deals include a loan to Enbridge, which closed on 30 March 2020, the same day as Barclays set out its net zero ambition.

BNP Paribas have the most robust policy to limit oil sands investment according to the report. It has implemented corporate restrictions using thresholds relative to companies’ exposure to oil sands and its policy covers all the bank’s products and services (funding, advisory, ancillary) and includes its asset management arm.

However, as its exclusion policy only applies to companies with a substantial share of oil sands activity, it allows room for the bank to continue funding international integrated or diversified players with significant oil sands investments.

As a result, even ExxonMobil, with around seven per cent revenues and 16 per cent reserves from oil sands, slips through the net of even the most ambitious current oil sands policy.

As such, ShareAction argues that robust oil sands policies must include:

In cases where oil sands are a small percentage of a company’s total revenues and/or operating activities, such as in the case of diversified oil and gas companies, ShareAction argued that banks should ask their clients to publish credible transition plans by a specific date. These plans should outline how the client plans to exit the oil sands industry and close their remaining oil sands assets on a timeline aligned with the Paris climate goals.