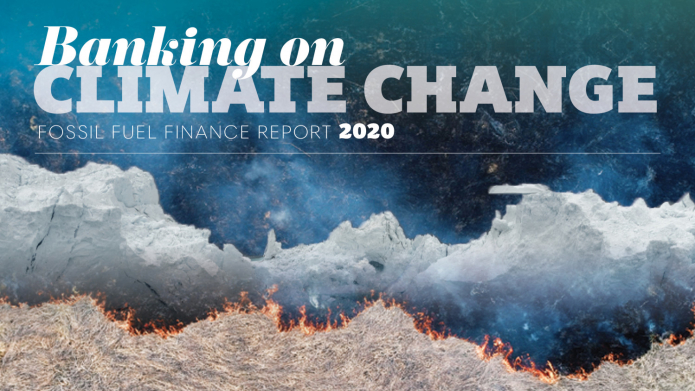 The latest version of the most comprehensive report on global banks' fossil fuel financing, Banking on Climate Change 2020, was released today, revealing that 35 global banks have not only been sustaining but expanding the fossil fuel sector with more than $2.7 trillion in the four years since the Paris Climate Agreement. The report finds that financial support for the fossil fuel industry has increased every year since the Paris Agreement was adopted in December 2015. The UN Intergovernmental Panel on Climate Change (IPCC) Special Report Global Warming of 1.5°C has shown that we need to rapidly reduce global carbon emissions if we are to avert the worst consequences of the climate crisis. Yet Banking on Climate Change 2020 reveals that the business practices of the world's major private-sector banks continue to drive us toward climate disaster.

Banking on Climate Change 2020, released by Rainforest Action Network, BankTrack, Indigenous Environmental Network, Oil Change International, Reclaim Finance, and the Sierra Club, and endorsed by over 250 organizations from 45 countries around the world, adds up lending and underwriting to 2,100 companies across the coal, oil and gas sectors globally over the period 2016-2019.

The report finds that fossil fuel financing continues to be dominated by the big U.S. banks: JPMorgan Chase, Wells Fargo, Citi, and Bank of America. Together, these four banks account for a staggering 30% of all fossil fuel financing from the 35 major global banks since the Paris Agreement was adopted.

RBC has been banking fossil fuels at $141 billion over the same period. This makes RBC the worst fossil banker in Canada, leading other Canadian banks by more than a third. In Europe, Barclays is cited as the worst, outpacing other European banks by a 36% margin. Barclays poured $118 billion into fossil fuels from 2016-2019 — though BNP Paribas was Europe's biggest fossil fuel funder in 2019. Moreover, BNP Paribas has been the worst fossil bank in France in the four years since the Paris Agreement, by a 56% margin.

MUFG, the worst banker of fossil fuels in Japan, provided $119 billion in fossil fuel financing during this period. China's worst fossil fuel bank, Bank of China, funneled $84 billion to the fossil fuel sector overall and was a major funder of coal in particular.

In addition to tracking these banks' fossil fuel financing practices, Banking on Climate Change 2020 also scores banks' future-facing policies on fossil fuels. The report assesses these institutions on their restrictions on financing for fossil fuel expansion and their commitments to phase-out fossil fuel financing in order to prevent global temperatures from exceeding a 1.5°C increase. However, no major bank is even close to meeting these goals, despite several recent, high profile policy announcements from financial institutions.

The report also assesses bank policies and practices around financing certain key fossil fuel subsectors. There has been an overall decline in financing for coal mining and power, where bank policies restricting finance have been in place for the longest period of time. But coal financing must fall much more steeply in order to be phased out in this decade.

Over the past four years, big banks have also increased their funding to companies with significant Arctic oil and gas reserves. Financing for fracked oil and gas also increased year on year, with U.S. banks topping the list as the worst funders of the sector. All banks profiled, with the exception of UniCredit and RBS, continued to allow unrestricted financing for companies producing and expanding oil and gas offshore. In addition, financing for top companies building liquefied natural gas import and export terminals jumped 39% last year.

Banking on Climate Change 2020 also highlights the banks' unacceptably poor performance on human rights via their financing of particular case study projects — from the Indigenous-led opposition of the Line 3 pipeline in North America, to fracking in Argentina's Vaca Muerta basin, to a proposed coal mine expansion in Poland. These examples highlight the lack of effective human rights policies to prevent these institutions from financing highly problematic projects and the problematic companies behind them.

Alison Kirsch, Climate and Energy Leader Researcher at Rainforest Action Network:
''Banking on Climate Change 2020 paints a deeply disturbing picture of how big banks, led by JPMorgan Chase, are driving us toward climate disaster. The data reveal that global banks are not only ramping up financing of fossil fuels overall, but are also increasing funding for the companies most responsible for fossil fuel expansion. This makes it crystal clear that banks are failing miserably when it comes to responding to the urgency of the climate crisis. As the toll of death and destruction from unprecedented floods, droughts, fires and storms grows, it is unconscionable and outrageous for banks to be approving new loans and raising capital for the companies that are pushing hardest to increase carbon emissions.''

Johan Frijns, Director of BankTrack:
''In the last year, banks have been queuing up to proclaim support for the goals of the Paris Agreement. Both the Principles for Responsible Banking and the new Equator Principles, each signed by over a hundred banks, acknowledge the global climate goals. Yet the data in Banking on Climate Change 2020 show these laudable pledges making little difference, and bank financing for the fossil fuel industry continuing to lead us to the climate abyss. It is high time banks recognised that reaching the Paris climate goals requires an immediate end to finance for all new fossil fuel projects, and a rapid phase out of existing fossil finance. This should be the Global Glasgow Goal for all banks.''

Dallas Goldtooth, Keep It In the Ground Campaign Organizer of Indigenous Environmental Network:
''From the Amazon to the Arctic — JPMorgan Chase, Citi, Bank of America and Wells Fargo's social licenses to operate are tainted with the debris of climate chaos and Indigenous rights violations. These banks must be held accountable for the destruction of Mother Earth and Indigenous lifeways. The time has long passed for banks to take corrective action — they must divest from fossil fuels now.''

Lorne Stockman, Senior Research Analyst with Oil Change International:
''As the human and financial costs of climate change mount up, these major banks are doubling down on the fossil fuels driving the climate crisis. It's beyond time banks took serious their responsibility for financing the greatest threat to the global economy. There is no excuse for carrying on with business as usual. It's time to stop funding fossils, period.''

Lucie Pinson, Executive Director of Reclaim Finance:
''French banks do relatively better than their competitors, but absolutely fail to align with the Paris Agreement climate targets. While they have some of the strongest overall fossil policies, with close to $70 billion for companies expanding fossil fuels French banks are still choosing irresponsible pollutors over a stable climate. BNP Paribas is a striking example: the bank has drastically cut its financing to the biggest unconventional oil and gas companies after adopting a policy in 2017, but its 70% increase in overall fossil fuel financing from 2018 to 2019 shows the bank's severe addiction to the oil and glas majors. BNP must urgently curb its financing to companies like Total and Shell if it wants to truly be a leader on climate.''

Ben Cushing, Sierra Club Beyond Dirty Fuels Campaigner:
''In the face of increasingly dire climate reports and a global outcry demanding action to avert the worst of the climate crisis, it is shocking that most major banks have not only kept up business as usual, but have continually increased their support for fossil fuels. Even as some banks have begun to rule out financing for some of the very worst actors in the fossil fuel industry, their plans still fall far short of what's necessary. It is long past time for all banks to pull their support for dirty fossil fuels, and our movement will continue to fight to ensure that they do.''

*** The organizations authoring the latest edition of this annual report want to acknowledge the extraordinary circumstances of this moment, given the terrible impacts of COVID-19 on lives, health, and livelihoods for people around the world.

As we write, the urgent need to respond to the pandemic and resultant economic impact is rightly taking priority, and may do so for some time. However, climate change remains an existential threat that, like coronavirus, will require unprecedented global action in solidarity with those most vulnerable. We believe that the data and analysis in this report will prove useful in addressing that threat with the seriousness that it deserves.