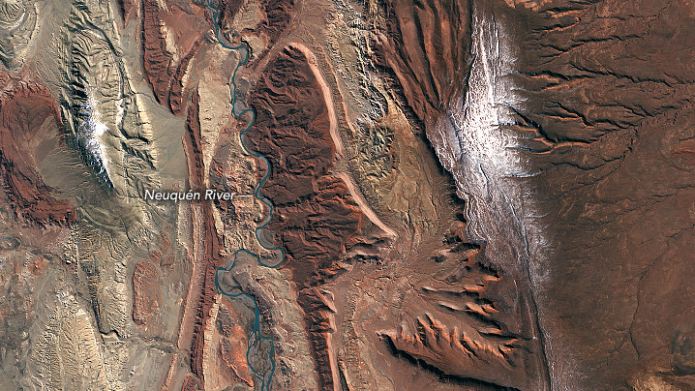 The Vaca Muerta Shale Basin is located in the Neuquén Basin. It has been identified as the largest shale play outside North America. The megaproject entails extraction from the area’s enormous shale oil and gas reserves, as well as building associated infrastructure such as pipelines and LNG terminals. The deposit extends over 30,000 square kilometres and represents 43% of Argentina's total oil production and 60% of its gas production.

Initially, this basin was supposed to contribute towards energy self-sufficiency, but recently, the export potential of the region has been realised and more attention is being paid towards exports.

The Vaca Muerta fracking megaproject poses grave risks to the world's climate as well as to indigenous communities. The UN Economic and Social Council recommends against fracking in Vaca Muerta in order to align with the Paris Agreement as well as to preserve the economic and social rights of future generations. The megaproject threatens the rights of the Mapuche indigenous community, who oppose the fracking activities on their land.

Banks should avoid financing new oil and gas extraction projects in the Vaca Muerta Shale Basin, and phase out their support for existing fossil fuel projects in the area. Banks should also demand that the companies they finance refrain, or withdraw, from involvement in Vaca Muerta. In general, banks shoud phase out their support for fossil fuel companies on a timeline consistent with what is necessary to meet the Paris targets.

Indigenous rights Indigenous communities living on the land are heavily opposed to the fracking activities taking place. They have not been asked for, and thus have not given, their free, prior and informed consent for the activities taking place on their lands. According to The Guardian, The Mapuche's cultural identity is being denied with the purpose of refusing community legal rights. Already at this stage of development, their ancestral lands are irreversibly damaged: water and air have been contaminated, plants have dried up, and new diseases have appeared.

Public health In 2018, the Mapuche filed a lawsuit against ExxonMobil, Total and Pan American Energy, accusing the companies of dumping toxic waste too close to the town of Añelo, indigenous lands and the region's principal river. The toxic waste is not being treated according to laws and therefore threatens human health. It contains high levels of hazardous elements that pose risks to reproduction and inhalation.

Workers safety In March 2019, a strike was called after the death of a worker in one accident and another that caused three injuries in Vaca Muerta.

Climate change In order to align with the Paris Agreement and avoid climate disaster, oil and gas production needs to be phased out as soon as possible. The carbon emissions from existing oil and gas operations would already push the world beyond 1.5°C warming - thereby making it impossible to meet the demands of the Paris Agreement. The Argentinean gas reserves alone could already eat up 11.4% of the world's remaining budget required to keep global temperature rise to below 1.5º. If the Vaca Muerta megaproject would receive the investments and support needed for expansion, the cumulative emissions are expected to quadruple by 2050 - exceeding 8 gigatonnes of carbon dioxide in total. In order to make exports viable, extraction operations from Vaca Muerta would need to be doubled in the next five years, which would mean that the reserve is responsible for an export of more than 500,000 barrels of oil every day. This extraction would have environmental repercussions in the form of increased carbon dioxide emissions from the reserve and excessive emissions from transporting operations required to move the surplus barrels of oil.

Pollution Hydraulic fracturing, or fracking, is the technology being used to develop unconventional hydrocarbon reservoires. Scientific research shows that the employment of fracking negatively impacts public health, water, soil and air. The technique makes use of several dangerous chemicals that are released during the process causing pollution. In the Vaca Muerta Shale Basin, fracking has caused leaks causing both air and water pollution.

Methane leaks It was found that methane leaks often occur during operations in Vaca Muerta. This potent greenhouse gas heats the planet 86 times more intensely than CO2 over a period of 20 years.

Oil spills Oil spills often occur in Vaca Muerta. Reportedly, an average of three oil spills per day took place between January 2018 and October 2018. In November 2018, Argentinean authorities suspended the license of the YPF/Schlumberger partnership that was operating at a shale well in the Vaca Muerta. The suspension followed a major well blow-out that contaminated 85 hectares of land with oil and drilling mud.

A decline was seen in fracking activities in the basin due to the COVID-19 pandemic, but things have been picking up since August 2020. The number of frack stages rose from 44 in July to 98 in August, with the number constantly increasing every month. This development is led by Shell and Vista Oil & Gas.

YPF planned the redeployment of 46 oil rigs at the basin from October 2020 to February 2021. This is being done to revive the oil and natural gas output after seeing a plunge in production due to the COVID-19 pandemic.

Banks finance the operations in Vaca Muerta in different ways. Banks mostly finance the companies that are active within the region, either through corporate lending or through equity investments. Some banks have also provided finance to companies for specific projects in Vaca Muerta. See below for more details.

More than 30 oil and gas companies are active in Vaca Muerta. The Argentinean energy company YPF is the main actor in the region. The company is involved in most of the projects, either alone or in joint ventures.

Due to economic crises, Argentina lost energy self-sufficiency and was forced to import large quantities of LNG and Bolivian gas. In order to solve the country's energy and economic issues, the government set a goal in 2011 to drastically increase the country's oil and gas output. The government nationalised the energy company YPF and put the company in charge of achieving this goal.

YPF and other Argentinean companies had been operating in the Vaca Muerta region for decades already when in 2013, an agreement between YPF and Chevron opened up the area to the global oil and gas industry. Besides Chevron, oil and gas giants such as Shell, Total and ExxonMobil now also started operations in Vaca Muerta. This development caused a significant increase in the number of extraction sites in Vaca Muerta, which also led to several disputes between companies and local communities (see: issues).

The international energy companies operating in the area mostly work in partnerships with YPF. As of March 2019, most projects were still in pilot phase. This can be attributed to the fact that the government has been unable to meets its promise to subsidise global oil and gas companies. The government will require substantial investments from foreign companies in order to be able to succeed in accelerating development in Vaca Muerta.

The developments in Vaca Muerta have been the target of protests by unions, environmentalists and indigenous groups. In September 2019, the Argentinean Ministry of Security announced that Vaca Muerta will be placed under the jurisdiction of the military police.