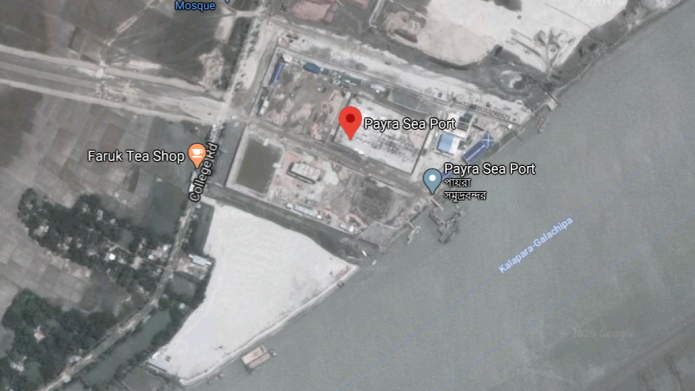 Location of the Payra Port, in Bangladesh. Photo: Google Earth

Payra Port is located in the Patuakhali district in South-central Bangladesh in the Barisal Division. The port is partially constructed, and began limited operations in 2016. It was opened to help loading and unloading of goods more quickly than Chittagong port, the largest port in Bangladesh.

The Payra Port Authority plans to expand the port with the construction of a deep-sea coal and bulk goods terminal, which would make Payra the country's first deep-sea port.

Currently Bangladesh imports about 1.5 million metric tons of coal per year. Once all the associated coal plants are commissioned, the Payra Port will allow an additional 20 million metric tons of coal to be imported from countries including Australia, Indonesia, India and South Africa. The year by which this will occur is unspecified. Five coal-fired power plants and an LNG terminal are already under construction in adjacent areas of Payra Port.

The Payra Port is expected to require a USD 16 billion investment in total. This project is part of the Bangladesh-China-India-Myanmar Economic Corridor, which was initially put forth under China's Belt and Road Initiative.

As of 10 March 2022, however, the government of Bangladesh cancelled the construction of the coal terminal as the project lacks economic viability.

The Payra Port coal terminal will allow Bangladesh to import an additional 20 million metric tons of coal per year, and will play a pivotal role in Bangladesh's plans for a massive expansion of coal power plant construction in the coming two decades.

HSBC must withdraw from its plans to arrange finance for the dredging of Payra Port, and other banks should shun involvement in the lending consortium.

Banks need to prohibit all financing for all projects in coal mining or coal power, and all companies with operations or expansion plans in these sectors.

Land acquisitions The Dhaka Tribune reported in 2019 that 1,743 families have already been displaced for the construction of the Payra Port. As of February 2019, only part of the compensation sum that they were promised has been paid to the displaced families. Farmlands are also being acquired for the construction of the coal power plants, threathening the livelihoods of local people who cannot continue their crop production.

Fishing livelihoods The Payra Port Coal Terminal under construction is located near the cross section of the Andharmanik River and Golachipa River. The first river is one of the river spots declared as an Ilish sanctuary, and the Golachipa river is the migration route for these fish. Only 10 kilometers upstream from the power plant side another Ilish sanctuary is located, the Tentulia River. The location of the coal power plant is therefore detrimental to the life of the Ilish, one of the most sensitive aquatic species in the world. Around half a million fishermen are dependent upon Ilish production for their livelihoods.

Health impact Once completed, the power plants will emit 600-800 kg of mercury per year into the surrounding area. It is estimated that one third of this will be deposited onto the land and fresh water systems in Bangladesh, which will ultimately increase the mercury concentration in the food. The mercury pollution alone will reach an area with 500,000-1,500,000 inhabitants.

Climate change The government of Bangladesh has set the goal to become a developed country by 2041. Part of that goal includes almost quadrupling the country's net electricity generation capacity by that time. Under these plans, the share of installed power capacity from coal, currently about 3 percent, will expand to 32 percent by 2041. Since Bangladesh has limited coal supplies of its own, most of the coal needs to be imported from other countries, including Australia, India, Indonesia and South Africa.

The coal terminal at Payra Port will open the floodgates for coal pollution the likes of which Bangladesh has never seen before. Currently Bangladesh imports about 1.5 million metric tons of coal per year. At peak operation, Payra Port would import 20 million metric tons of coal each year, to feed eight proposed and under-construction coal power stations with a total capacity of 10 gigawatts, making it the largest coal power cluster in South Asia and the second largest in the world. Over their lifetimes, these plants would collectively emit more than three times as much carbon dioxide as the whole of the UK did in 2018.

The government of Bangladesh announced to cancel the construction of the coal terminal at Payra Port due to a lack of response from private investors in the past eight years.

The Prime Minister said the project was not economically viable. “That’s why I moved away from the project. We can benefit more from other projects.”

The project director of Developing Infrastructures and Support Facilities for the operation of Payra Deep Sea Port stated that two jetties instead of a terminal could serve the purpose of coal unloading. The state-owned Power Grid Company of Bangladesh (PGCB) will also build another jetty.

HSBC is reported to be acting as lead arranger for a EUR 865 million loan to finance dredging works for the Payra Port, according to The Asia Times. The financial times of Bangladesh reported in July 2020 that dredging of Payra Port was delayed due to the COVID-19 pandemic.

China State Shipbuilding Corporation (CSSC) is responsible for the construction of ancillary facilities and utility services at Payra Port. The total value of the contract is USD 120 million.

In January 2019, Payra Port authority contracted company Jan De Nul for dredging of a 75 kilometers long and 100–125 meters wide main channel. In December 2020 Jan de Nul signed a contract with the Payra Port Authorities in order to maintain the depths of the exisitng port access channel. As of February 2021, the government scrapped the public-private-partnership (PPP) deal with the Belgian company Jan de Nul on dredging works along the Rabnabad channel of the Payra Port after finding that the estimated cost of Tk 8,643 crore for the works was too high.

Govt steps back from coal handling terminal at Payra Port

Japanese firms to invest $6.4b

Farmlands near Payra in peril

Payra Port was established in 2013 and opened for limited operations in August 2016. The Payra Port Authority retendered for construction of the coal/bulk terminal in January 2020.

In 2016 two Chinese companies, the China Harbour Engineering Company and the China State Construction Engineering, signed an agreement worth USD 500 million to improve the port.

The Belgian dredging company Jan De Nul has stated the first phase of the dredging, which is to check the siltation rate in the river channel, will start by April 2020 and continue until 2021. HSBC is expected to lead the consortium financing the dredging works.