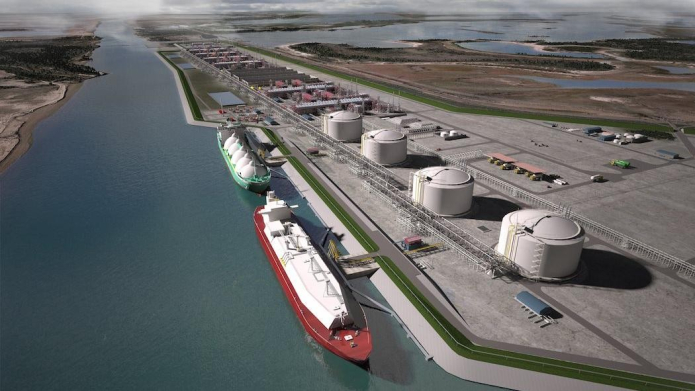 This facility in the Port of Brownsville in Texas, USA, will be the export point for liquified natural gas from the Agua Dulce in Nueces County. This gas will be piped along the proposed Rio Bravo Pipeline, then supercooled and compressed into a liquid for export. The Rio Grande LNG Terminal project is majority-owned by Houston-based NextDecade, alongside the South Korean construction corporation Hanwha. The Rio Bravo Pipeline is owned by Canada’s Enbridge. According to NextDecade, the investment for its LNG terminal and the required infrastructure would amount to approximately USD 17.5 billion. In addition to Rio Grande, the Texas LNG and Annova LNG terminals are also planned for the Port of Brownsville.

In general, LNG export terminals are detrimental to human health, capital-intensive, financially risky and environmentally destructive. In the US, they disproportionately damage the health of low-income Latinx communities. This project also threatens important wetlands such as the Bahia Grande, North America’s largest wetlands restoration project.

LNG is the most carbon-intensive form of natural gas. This expansion of LNG infrastructure strengthens fossil fuel dependency and therefore exacerbates the risk of climate breakdown. Therefore, Société Générale, Macquarie and SMBC should withdraw their involvement in this project.

Climate change-related hardship for Gulf Coast communities will be exacerbated by the Rio Grande LNG Terminal. The population of the USA’s Gulf Coast states – Texas, Louisiana, Mississippi, Alabama and Florida – is expected to exceed 74 million by 2030. Coastline inhabitants will have to contend with severe erosion and subsidence. Such conditions add to the growing threat of large-scale industrial accidents that these energy production facilities represent. Furthermore, the human health and wellbeing impacts of a changing climate hit economically vulnerable populations the hardest, which will have negative political and public health implications.

The worsening health of low-income ethnic minorities is often a consequence of LNG terminals. This terminal is located between the Laguna Madre communities and next to Brownsville, which is a rural, approximately 90% Hispanic and Latinx community. More than 34% of Rio Grande Valley residents live in poverty, a higher percentage than any other metropolitan area in the US. The region already struggles with major health issues and this project would release further thousands of tonnes of pollutants into the air. Across the US, nearly 1.78 million Latinx people live in areas facing cancer risks above the EPA's level of concern, due to toxins emitted by oil and gas facilities. Industrial ozone smog burdens Latinx communities with 153,000 childhood asthma attacks and 112,000 lost school days each year.

Negative consequences for local fishing, shrimping and ecotourism are likely to follow this development. The release of effluent water could compromise the beauty and economy of nearby South Padre Island, as will the brown haze created by the terminal’s air pollution. In the Rio Grande Valley, nature tourism alone leads to 6,600 jobs. By contrast, an LNG terminal mostly creates temporary construction roles and a few hundred permanent jobs.

Huge greenhouse gas emissions are an inevitable consequence of this project. LNG is the most carbon-intensive form of natural gas, due to the necessary extraction, piping, liquefying and shipping processes. Burning the annual gas volume that the Rio Grande, Texas and Annova LNG terminals could export when operating at full capacity would create the equivalent annual greenhouse gas emissions of 30 coal-fired power plants.

The area’s ecosystem will be fundamentally altered by the construction, bright lights, tall structures, air pollution and wastewater of the Rio Grande LNG Terminal. For example, endangered ocelots and Aplomado falcons roam this area. As of August 2015, only 53 ocelots were left in Texas and they were all found here.

The terminal is right on the edge of the Bahia Grande unit of the Laguna Atascosa National Wildlife refuge. The US Fish and Wildlife Service calls this “one of the largest and most successful coastal wetland restoration projects in the US”. This restoration is ongoing. The 21,700-acre refuge is a safe haven for a range of species and native vegetation, as well as a crucial storm barrier.

The US Federal Energy Regulatory Commission (FERC) has announced a Public Scoping Meeting regarding NextDecade’s Carbon Capture and Sequestration plans for its Rio Grande LNG Terminal. Public comments can be submitted until 3rd October 2022, after which the FERC “may consider” preparing an Environmental Assessment or more detailed Environmental Impact Statement.

Rio Grande LNG Terminal owner NextDecade has announced the private placement of common stock, the proceeds from which will fund development of the project’s first three trains. NextDecade is looking for 10 institutional investors for stock worth USD 85 million. The placement is expected to close on 19 September 2022.

Environmental groups and fishermen have told a federal appeals court in New Orleans that the US government was too accommodating to the gas industry in permitting the Rio Grande LNG facility on the Gulf Coast. The Sierra Club’s attorney Thomas Gosselin said the US Army Corps of Engineers’ Clean Water Act permit for the terminal and associated Rio Bravo Pipeline failed to fully account for environmental damage. The permit allows developers to discharge unwanted materials into waterways, including wetlands.

NextDecade has asked the US Federal Energy Regulatory Commission for a completion extension for its Rio Grande LNG facility, from 2026 to 2028. The export facility currently has three customers secured, which will not be enough to reach a partial Final Investment Decision by the end of 2022.

Rio Grande LNG FID postponed to second half of 2022

NextDecade has announced that the expected Final Investment Decision on its Rio Grande LNG facility has again been delayed, this time to the second half of 2022. This is the second postponement since 2020 and will delay the original production commencement target of 2023. No reason was given for this delay.

The Final Investment Decision (FID) on NextDecade's proposed Rio Grande LNG export facility has been delayed until next year amid challenging market conditions. No update was provided to a previous target of 2023 for the commencement of commercial exports. This target will likely be missed, however, given the FID delay and the time it takes to build a traditional large-scale US liquefaction facility. NextDecade shares rose sharply on Monday, amid an overall jump in the equity market and NextDecade’s expectation that it will have more than sufficient cash to continue project development.

The environmental groups Sierra Club and Defenders of Wildlife have filed a lawsuit that challenges the US Fish and Wildlife Service’s approval of the Annova LNG facility in southern Texas. The suit was filed in conjunction with another that challenges the region’s Rio Grande LNG Terminal. Both terminals threaten the critically endangered US ocelot.

The US Federal Energy Regulatory Commission’s Richard Glick has issued a dissent regarding the Rio Grande LNG Terminal and associated Rio Bravo Pipeline. Commissioner Glick said “the Commission steadfastly refuses to assess whether the impact of the Project’s greenhouse gas (GHG) emissions on climate change is significant, even though it quantifies the GHG emissions caused by the Project.”

The Rio Grande LNG sponsor NextDecade has received Federal Energy Regulatory Commission approval for the siting, construction and operation of the proposed export facility, as well as the Rio Bravo Pipeline that will supply it.

NextDecade has announced the appointment of banks Société Générale and Macquarie Capital as joint financial advisors for its Rio Grande LNG and associated Rio Bravo Pipeline projects, in anticipation of debt and equity financing. Both projects are in the midst of the Federal Energy Regulatory Commission’s permitting process.

The US Department of Energy has granted NextDecade the necessary authorisation to export liquified natural gas from the Rio Grande LNG Terminal. This authorisation permits the export of up to 27 million tonnes per annum over 30 years.

The first tranche of financing for the Rio Grande LNG Terminal totalled USD 8 billion, split between USD 4.4 billion in debt and USD 3.6 billion in equity.

NextDecade is responsible for the development, financing, construction and operations of the Rio Grande LNG Terminal. In August 2018, the South Korean company Hanwha acquired a 10% stake in the project; 90% remains with NextDecade. In February 2020, Enbridge acquired 100% of the share capital of the Rio Bravo Pipeline from NextDecade, assuming responsibility for its development.

Contracted for the engineering, procurement, and construction (EPC) of the Rio Grande LNG project

In November 2020, NextDecade selected Great Lakes Dredge & Dock Corporation to improve the Brownsville Ship Channel in line with the US Army Corps of Engineers' (USACE) plans for P3 civil works at the Port of Brownsville, Texas. (IJGlobal)

France's Engie Pulls Out of US LNG Deal Talks

NextDecade gets investment in its Rio Grande LNG project

Shrimpers and Fisherman for RGV request for analysis of whether Annova LNG's cancellation frees capacity on the Valley Crossing Pipeline that could be used in lieu of a second Rio Bravo pipeline Under CP20-481 et. al

Letter from NGOs to Societe Generale on Rio Grande LNG

How long does it take to build an LNG export terminal in the United States?

Exploration of LNG projects in the USA by Global Energy Monitor

Case study featured in the Banking on Climate Chaos 2022 report

Save RGV provides educational and environmental advocacy to promote environmental justice and sustainability through addressing the causes and consequences of climate change that affect the health and well-being of the entire Rio Grande Valley community.