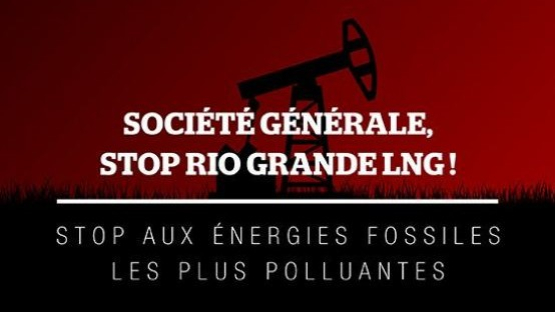 In a report published today, Friends of the Earth France strongly criticises Société Générale’s support for the export of shale gas from the United States to Europe and Asia. The group is calling on the bank to withdraw from the controversial Rio Grande LNG (liquefied natural gas) project in Texas and to end its support for the most dangerous fossil fuels, as BNP Paribas has already committed to do.

The new report from Friends of the Earth France, 'Société Générale – Foot on the gas for fossil fuels', reveals the key role played by Société Générale in supporting the export of US shale gas to the European Union. In the US, the bank advises and funds the sector’s leading companies for development of their LNG export terminal projects.

Among Société Générale’s customers are Cheniere Energy, which has already signed contracts with EDF and Engie to export LNG to France; as well as NextDecade, which the bank is advising for the construction of a liquefied shale gas export terminal, Rio Grande LNG, and a related  double pipeline for LNG, the Rio Bravo Pipeline. In 2017, NextDecade stated that Société Générale had been involved in all LNG terminal projects authorised in the United States, and no less than 45 such transactions internationally.

"By supporting these export projects, Société Générale is helping to bring shale gas into France, despite the fact that shale gas was banned in France seven years ago. This is completely hypocritical. If shale gas is banned in France, then it should not be arriving arrive by boat from the US with the complicity of a French bank. Building these terminals would lead to an increase in shale gas production, contrary to the climate imperative of leaving fossil fuels in the ground, and would have disastrous environmental and health impacts, which we have fought against here in France."

Between 2014 and 2016, Société Générale has provided more than $2.4 billion to companies developing these projects in North America, thus making it the 7th ranked international bank and the number one French bank in terms of exposure to the sector, far ahead of other major French banks BNP Paribas, Crédit Agricole and Natixis.

BNP Paribas previously had an advisory mandate for the Texas LNG shale gas export terminal project located a few hundred metres from the Rio Grande LNG site. However, in October 2017, BNP Paribas announced its withdrawal from the entire shale gas sector, a commitment which covers exploration and production as well as transport and LNG export. Last December, Société Générale announced only minimal measures regarding its financing of this sector, measures which campaign groups view as insufficient for reducing the climate, environmental and social impacts of this industry.

“The weakness of Société Générale’s commitment shows its total disregard for communities affected by shale gas projects and its denial of climate science. By putting an end to its support for new shale gas infrastructures and de facto withdrawing from the Texas LNG project, BNP Paribas has shattered Société Générale's pro-gas narrative. Société Générale is isolated and we will look closely at its decisions in the coming weeks. We will remain mobilised until it steps out from the Rio Grande LNG project and the entire sector, as BNP Paribas has done.”

As a result of Société Générale’s unwillingness to shift its policy on shale gas and LNG, campaign pressure against the bank is intensifying. This week in France, actions are planned around the country to call on the bank to finally align its financing practices with the increasingly urgent reality of climate change.

The new report is available (in French only) here: