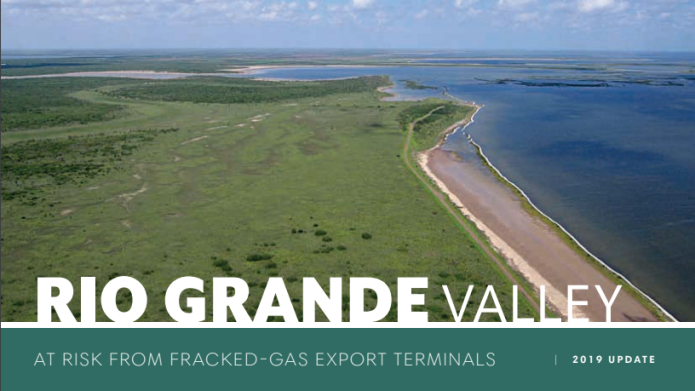 Rio Grande LNG, Texas LNG, and Annova LNG and the Rio Bravo pipeline would liquefy fracked gas from the Eagle Ford and Permian shale basins for export through the Port of Brownsville. The combined impact of these three proposed projects would be devastating for the region, threatening Indigenous rights, community health, endangered species, and the global climate.

Already, pressure from activists raising these concerns convinced leading international bank BNP Paribas to step away from Texas LNG, and ultimately all fracked gas export terminals and pipelines. The report, released today by the Sierra Club, Rainforest Action Network, Friends of the Earth France, Save RGV from LNG, and the Carrizo Comecrudo Tribe, “Rio Grande Valley: At Risk From Fracked-Gas Export Terminals,” details the harms these proposed projects would do to the climate and local communities, and makes the case that other financial institutions should follow BNP Paribas’ lead and stay away or risk lasting reputational damage.

“These proposed LNG terminals have faced massive resistance from local residents because they would be an environmental disaster for our region, threaten local businesses, and trample Indigenous rights,” said Sierra Club Brownsville Organizer Rebekah Hinojosa. “The local movement fighting to protect our communities isn’t going away, and banks should think twice before being associated with these toxic projects.”

“At a time when science calls us to immediately and drastically reduce our greenhouse gas emissions, the fossil fuel industry plans to sacrifice a critical ecosystem to build a new climate bomb. This total nonsense has already been acknowledged by the second biggest European bank, BNP Paribas. We today ask all banks to do the same and commit not to support this disaster in the making,” said Lorette Philippot, Private Finance Campaigner with Friends of the Earth France.

“The proposed Rio Grande Valley fracked-gas export terminals would abuse Indigenous rights, threaten endangered species, hurt the local economy and help light the fuse to a massive carbon bomb. If built, they would be vulnerable to the very storms and sea-level rise they would exacerbate,” said Jason Opeña Disterhoft, Climate and Energy Senior Campaigner at Rainforest Action Network. “This report sends a clear warning to banks and investors of the risks they’re running if they support these projects. We urge them to stay away.”

“Texas LNG plans to destroy a pre-Columbian archaeological site called Garcia Pasture with the remains of our ancestors and villages. These pristine lands where the Rio Grande LNG, Texas LNG, and Annova LNG companies plan to bulldoze and spew toxic pollution are sacred to the Carrizo Comecrudo Tribe, and the companies did not consult with us,” said Juan Mancias, Chairman of the Carrizo Comecrudo Tribe of Texas.

“Our communities have time and time again told regulators we oppose the three LNG projects. We know we can’t count on FERC to protect the health and future of Rio Grande Valley communities, but banks and investors still have an opportunity to do the right thing. We’re calling on them to side with our communities and not support the Rio Grande LNG, Texas LNG, and Annova LNG projects,” said Josette Cruz, Save RGV from LNG Coalition.

All three projects are awaiting approval from the Federal Energy Regulatory Commission and local agencies. One of the three proposed projects, Texas LNG, has been set back at least a year by opposition from the city of Port Isabel.

Note: This report is being distributed to 37 top global bankers of LNG, and 31 top LNG investors:

LNG Terminal
There are no projects active for this item now.
on record