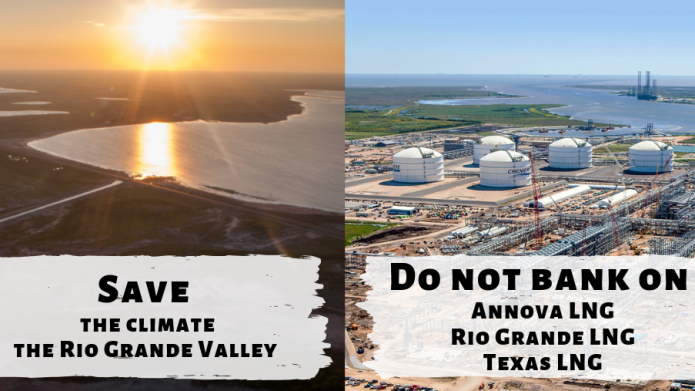 More than 100 NGOs have written to a string of potential financiers of three fracked gas export terminals and related infrastructure projects proposed for the Rio Grande Valley in South Texas, calling on the institutions to turn down financing for Rio Grande LNG, the Rio Bravo Pipeline, Annova LNG and Texas LNG.

The projects in question, currently in their final permitting stages, but yet to reach Final Investment Decisions, would impact on local populations, violate Indigenous rights, wreck ecosystems and lock in decades of climate-killing greenhouse gas emissions.

Here we take a brief look at why these massive hydrocarbon export projects are stirring such opposition from South Texas communities and internationally. For a more detailed overview of these problems, see this July 2019 briefing.

The same amount of climate damage as 61 coal plants

If built, these LNG projects would liquefy and export 5.1 billion cubic feet of shale gas every day. This contradicts the goal of keeping global warming well below 2°C, and to aim for 1.5°C. Recent scientific research published in the journal Nature has concluded that a 1.5°C carbon budget does not allow for any new carbon-emitting infrastructure.

And yet, these three proposed terminals are poised to become major new sources of carbon emissions. Taking into account potential methane leakage and the energy-intensity of liquefying and shipping gas, the Rio Grande Valley’s LNG terminals would be doing the same annual climate damage as 61 coal plants. In addition, the construction of new export terminals provides a direct incentive to produce more shale gas through hydraulic fracturing across the state, which is also linked to widespread water contamination and community health impacts, in addition to the incompatibility of this production with a stable climate.

Should any bank decide to support these projects, they would be flying in the face of any meaningful pledge to participate in the fight against climate change and in the transition to a low-carbon economy.

Habitats and wildlife under threat

The terminal sites would altogether cover 2,340 acres, including paving over hundreds of acres of wetlands and irreplaceable clay hills — called Lomas — surrounded by tidal flats which provide thickly vegetated wildlife habitat. Fourteen liquefaction trains, eight storage tanks, and hundreds of miles of new pipeline would be built for these three projects.

Moreover, the development and operation of the gas infrastructure, as well as the constant navigation of tankers shipping the gas across the ocean, would irrevocably scar an international wildlife corridor that includes the Laguna Atascosa National Wildlife Refuge and the Bahia Grande, one of the largest wetlands restoration projects in North America.

This development also threatens the endangered ocelot. A report published in May 2019 by the Intergovernmental Platform on Biodiversity and Ecosystem Services warned that one million species may be pushed to extinction in the next few years; supporting these projects would go against the common effort to tackle biodiversity issues.

The proposed terminals would also have irreversible impacts on the local economy, degrading the fishing, shrimping and ecotourism industries, and threatening the livelihoods of thousands of people. In the Rio Grande Valley, nature tourism alone leads to 6,600 part- and full-time jobs.

An LNG terminal, on the other hand, creates mostly temporary construction jobs, and typically only a few hundred permanent jobs. The largest terminal proposed for the Rio Grande Valley would in comparison create only about 200 permanent jobs.

Texas LNG would bulldoze the Garcia Pasture, a federally-recognised Indigenous site that is home to burial grounds and artifacts – and no archeological studies in the immediate construction sites of the other two terminals have been conducted. More archaeological and cultural data needs to be collected and assessed before any construction permits are granted.

These lands are sacred to the Carrizo Comecrudo Tribe, also known as the Esto’k Gna, who are the original people of the region, and who not only did not give their Free, Prior and Informed Consent for these projects to move ahead, but have not even been part of the companies’ consultation processes.

Local communities are rising up

Local people have made it clear that they oppose these destructive projects. Every community that would be impacted – South Padre Island, Port Isabel, Laguna Vista and Long Island Village – has passed anti-LNG resolutions. The school board has sided with the community and rejected tax breaks for the Rio Grande LNG and Annova LNG projects. Locals are challenging the permitting process every step of the way by taking legal action, sending thousands of comments to regulators and packing public hearings.

All three of these proposed projects are subject to the Equator Principles, by virtue of their capital costs being well above  USD 10 million each. In light of the diverse and irreversible impacts detailed above, they appear to each be Category A projects – the highest risk category – and Equator Principles Financial Institutions should be aware that there is a strong argument that none of the three proposed terminals is compliant with the Equator Principles at all.

Banks which choose to become involved in these fracked gas export projects face strong opposition and pressure from civil society, and any bank that chooses to get further involved must be ready to face the same reputational risks.

The institutions addressed by 105 NGOs from around the world must now refuse direct or indirect involvement in advising, investing, financing, arranging or otherwise facilitating the development of these projects in South Texas.