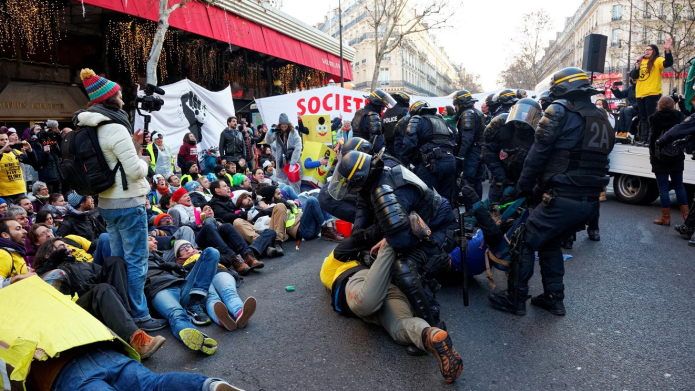 Responding to the call of Friends of the Earth France and Nonviolent Action COP21, 912 activists converged from all over France to participate in a large 'clean up' action of the main branch of Société Générale on the final day of COP24 in Poland. Despite violent police repression and the arrest of a demonstrator, the activists were determined that their call on Société Générale to end its support for fossil fuels and primarily shale gas be heard by the bank, and announced that they would clean up the bank's 150 Parisian branches throughout the day.

912 people gathered in front of Société Générale’s main branch on boulevard Haussmann in Paris. Equipped with brooms, sponges, mops and buckets, they were determined to carry out a giant, non-violent 'clean up' operation of the champion dirty energy bank. Large numbers of security services present at the scene violently repressed the attempts at cleaning by pushing, dispersing and gasing the activists. Gabriel Mazzolini, of Friends of the Earth France and in charge of dialogue with the police to ensure the smooth running of the action, was arrested.

Lorette Philippot, of Friends of the Earth France, commented:

“The mask falls. As COP24 concludes, the French government which claims to be a climate leader on the international scene, is gasing and stopping non-violent activists intent on denouncing Société Générale's responsibility for climate change. The image this presents internationally is highly unfortunate, that of a government which instead of taking the necessary measures to fight against climate change, prefers to violently repress this mobilisation of citizens. Our determination is redoubled, and we will clean up Société Générale’s 150 branches in Paris for the rest of the day.”

Jon Palais, from the organisation Nonviolent Action COP21, explained the reasons for this extraordinary mobilisation:

“The state of emergency in climate and social terms requires a response from major economic and financial actors, and Société Générale is at the top of this list. It massively finances climate change via the support which it continually grants to the fossil fuel sectors which are the most destructive for the planet. The success of this mobilisation shows the determination of citizens to fight against a profit policy which completely ignores the common good.”

In front of activists shouting slogans such as “SoGé: we want to clean” and “The police, with us, we’re doing it for your children”, several speakers including Jason Opeña Disterhoft, from US organisation Rainforest Action Network, pointed out Société Générale’s responsibility for the development of shale gas.

Société Générale is the world’s top bank for financing the export of North American shale gas, with $1.1 billion in financing provided in 2017 to liquefied natural gas (LNG) export terminal projects in North America.

“Société Générale will have to choose its side, either that of the climate or that of politicians like Donald Trump who are blocking efforts to fight against climate change. The COP24 ending today in Poland has been badly overshadowed by US opposition to the recognition from the 196 parties of the conclusions of the latest IPCC report. It is precisely this irresponsibility from which we are asking Société Générale to dissociate itself.”

The activists are calling on Société Générale to put an end to its support for shale gas, in particular the Rio Grande LNG project.  They have also demanded the immediate release of the arrested activist.

Photos of the action in Paris are available here.

2. These projects are a key component of the US administration’s ‘energy dominance’ policy, which aims to channel its overproduction of shale gas around the world, including to Europe and France – where fracking has been banned since 2011.

3. Rio Grande LNG, located in the south of Texas, is one of numerous projects supported by Société Générale. The bank is currently in charge of helping the company to structure the project and to convene other financiers, a crucial role that will bring about the raising of the $20 billion needed for the construction of the huge gas complex.

The project would contribute emissions of the same scale as 44 coal-fired power plants and threaten the living conditions of local communities and indigenous peoples. Due to this carbon footprint of LNG from shale gas, French bank BNP Paribas decided in October 2017 to withdraw all its support to the sector.