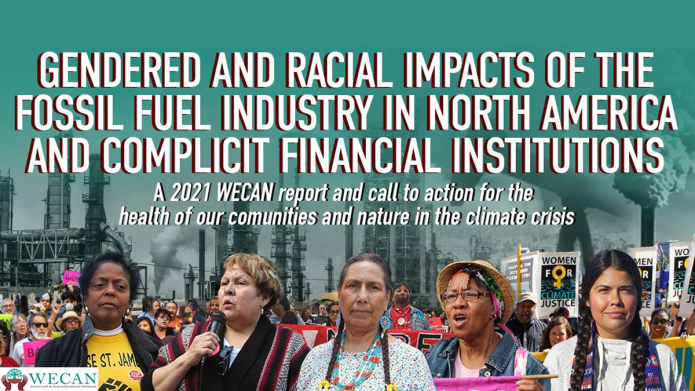 Today, in the run-up to President Biden’s Leaders Summit on Climate, and the AGM season, the Women’s Earth and Climate Action Network (WECAN) is releasing a 100-page report highlighting the intersections of gender, race, the fossil fuel industry and complicit financial institutions.

The report, Gendered and Racial Impacts of the Fossil Fuel Industry in North America and Complicit Financial Institutions: A Call to Action for the Health of our Communities and Nature in the Climate Crisis addresses the disproportionate gender and race-specific health and safety impacts as well as human and Indigenous rights issues of fossil fuel extraction and infrastructure in the United States and selected parts of Canada; interlocking issues that have been sorely neglected in the discourse regarding fossil fuel extraction.

The report spotlights Vanguard, BlackRock, Capital Group, JPMorgan Chase, Royal Bank of Canada, Bank of America, and Liberty Mutual, as complicit financial institutions that are preserving and perpetuating negative gender and racial impacts due to financing, insuring, and investing in fossil fuel companies.

Based on the analysis of first-hand women’s accounts, peer-reviewed scientific articles, and other published papers, this report identifies a myriad of links between the fossil fuel activity that particular financial institutions support and threats to the health and safety of African American/Black/African Diaspora, Indigenous, Latina/Chicana, and low-income women. The report covers gender-based and race-specific effects that include environmental racism, breaches to Indigenous rights, air pollution, water pollution, soil pollution, heat islands, fertility issues, “man camps”, physical and mental health impacts, as well as the unequal caretaking role that women play across the United States, Canada and globally.

The report provides scientific evidence for the many disproportionate health impacts women experience from fossil fuel pollution. For example, air pollution and water contamination have been linked to breast cancer, ovarian diseases, and risks to women’s pregnancies. Proximity to fracking has been linked to adverse birth outcomes, including premature births and high-risk pregnancies.

The report also brings attention to the connection between “Man Camps”, temporary housing sites set up for construction workers along pipeline routes, and the epidemic of Missing Murdered Indigenous Women.

In the report, Joye Braun (Cheyenne River Sioux), an organizer with the Indigenous Environmental Network and Leader of the Wakpa Waste Camp, is quoted describing this trauma: “The truth is written in the blood and tears of our sisters that tar sands and the subsequent pipelines are nothing more than death knocking at our children’s future. As Indigenous women we know the fear of looking into our daughter’s eyes hoping and praying they won’t go missing or murdered. These industries bring that fear to our doorstep. They bring death to our cultures and our children.”

Perry Sheffield MD, MPH states further the need for connecting the dots between women’s health and the fossil fuel industry: “This report tells the story that is hard but imperative that we hear about how despite knowing that many of our energy choices and financing are costing us thousands of lives and far greater chronic health burden, we have persisted to condone this system. It’s time to write a different story that will instead promote health, centering women and children and as a side effect benefit everyone.”

Based on an examination of approximately 30 companies, this report identifies Enbridge, Chevron, Shell, Formosa, Total SE, Marathon Petroleum, Occidental Petroleum and ExxonMobil as some of the worst actors in terms of pollution emissions, industry accidents (e.g. oil spills), current expansion of fossil fuel-related projects/permits, and overall detrimental harm to local communities. Seven of the leading financial institutions backing these specific companies and other fossil fuel companies across the world are Vanguard, BlackRock, Capital Group, JPMorgan Chase, Royal Bank of Canada, Bank of America, and Liberty Mutual.

All seven of these financial institutions have voiced support of the Paris Agreement and human rights via statements or by signing various international frameworks, yet, these financial institutions continue to provide financing to companies whose operations are disproportionately harming women and communities of colour, while also violating Indigenous rights and furthering the climate crisis.

Shamyra Lavigne, a Member of RISE St. James, describes these breaches to intrinsic human rights resulting from fossil fuel activity in her community of St. James Parish, Louisiana: “Basic human rights have been violated... I believe as humans we have the right to clean air and clean water, and these industries prevent us from being able to have this constant need. And it is affecting our health here and it is causing people to have illnesses and to have cancer... So I do believe it’s a human rights .”

The report also lays out the various risks financial institutions are exposed to, including regulatory risks, stranded assets, physical and transition risks of the climate crisis, and reputational risks.

The report concludes with recommendations for financial institutions to adopt bolder policies and robust implementation standards on climate and human rights issues. It also advocates for a Just Transition to a renewable, regenerative energy economy that uplifts communities most impacted by environmental degradation, pollution, and the climate crisis.

Osprey Orielle Lake, WECAN Executive Director and co-author of the report explains the importance of the report: “The fossil fuel industry, and their financiers, are leading us further down the path of irreparable climate disaster, and we need to understand who is being harmed first and worst by their actions. If we want to truly address the climate crisis we must lead with climate justice and that means understanding the gendered and racial impacts of the fossil fuel industry. Women are rising to stand up and end the violence against the earth and women. Through the report, we are calling on financial institutions to be leaders in a Just Transition by taking action to halt the financing of fossil fuel extraction and infrastructure, which is causing egregious harms to frontline women and communities. We want no more sacrifice women, no more sacrifice zones, and no more sacrifice zip codes. The fossil fuel era is over and the time is now to transition to renewable, regenerative energy, and a healthy and just future for all.”

The report, organized by Women’s Earth and Climate Action Network, began with an investigation into fossil fuel extraction, and infrastructure projects across the United States and in a few locations in Canada. Based on the initial collection of research, eight regions with large fossil fuel projects and/or high concentrations of fossil fuel infrastructure were identified. The information presented on the companies and their projects is not exhaustive, but rather focuses on specific information relevant to the scope of the report. Based on an examination of companies operating in the eight regions, seven financial institutions are identified as prominent financiers, insurers, and investors of these companies. This report is based on the analysis of first-hand women’s accounts, peer-reviewed scientific articles, and other published papers. The data presented is limited to our own research investigation. We believe that the research we have presented opens the door to the import of further research on the subject.