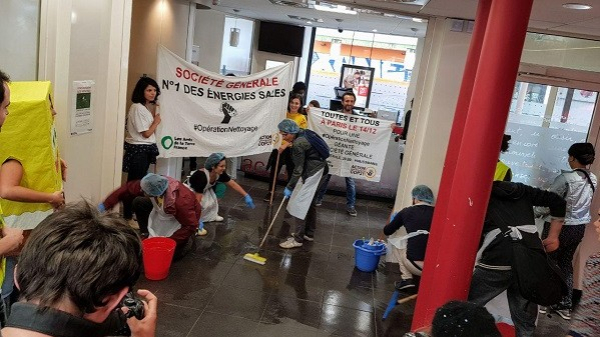 On the occasion of a global day of climate mobilisations, 38 “clean-up” actions were carried out in Société Générale branches by Friends of the Earth France and Non-Violent Action COP21. They called on the bank, France’s biggest financier of dirty energy, to put an end to its support for fossil fuels, and particularly for the Texan shale gas export project Rio Grande LNG. The groups also announced a giant action at the bank’s central Paris branch on December 14, at the end of COP24, if Société Générale does not revise its policy.

Armed with sponges, brooms and mops, more than 600 activists from Friends of the Earth France and Non-Violent Action COP21 (ANV-COP21) have scoured, scrubbed and polished 38 Société Générale branches in France . In Paris and from Nantes to Sallanches and Dunkirk to Aix-en-Provence, the common slogan was: “since Société Générale is the champion of dirty energy, let’s clean it up!” Société Générale takes the lead among French banks in its support for dirty energies including coal, shale gas, tar sands, ultra-deepwater drilling and Arctic drilling. It is also supporting Trump’s climacidal policies as the biggest French bank financier of shale gas exports in North America: in 2017 alone the bank has channelled $1.1 billion to this sector .

Activists called on the bank to change course and make a public commitment at the Global Climate Action Summit in San Francisco from September 12th to 14th. Lorette Philippot, from Friends of the Earth France, said: “We have decided to give Société Générale a hand today to encourage the bank to stop its massive support for fossil fuels. Even BNP Paribas, which was until recently the worst French bank in this field, agreed to adopt a policy to make its activities less harmful for the climate, the environment and rights of local communities and particularly indigenous peoples. It is baffling for Société Générale not to also take these fundamental issues into account. We call on the bank, as a priority, to withdraw from the Rio Grande shale gas export terminal project in Texas, which would alone emit as much as 44 coal plants”.

A call was launched the same day by 20 organisations, including North-American NGOs and people impacted by the Texan project, to organise a giant cleaning action of the bank’s central Paris branch on December 14, the last day of COP24, if the bank does not publicly announce a revision of its policy before then. Elodie Nace, from ANV-COP21, continued: “We invite all citizens to join us on December 14 at Société Générale branch on 29 Boulevard Haussmann, to organise a giant cleaning action at the bank. The climate crisis is now obvious, and we cannot let a French bank continue to aggravate this ongoing climate disaster! Société Générale must understand that their days of impunity are over, and the Global Climate Action Summit in San Francisco is a good opportunity to remind them of that”.

The mobilisation targeting Société Générale was organised as part of the global day of action for climate including marches across France and international initiatives under the Rise For Climate banner . It reflects the determination of citizens who, faced with the climate urgency, do not hesitate to take part in civil disobedience. Some of them have been trained to non-violent action as part of the Alternatiba tour, a vast popular mobilisation on climate, ending in Bayonne on October 6th and 7th with a village of alternatives bringing together more than 200 civil society figures and tens of thousands of citizens.