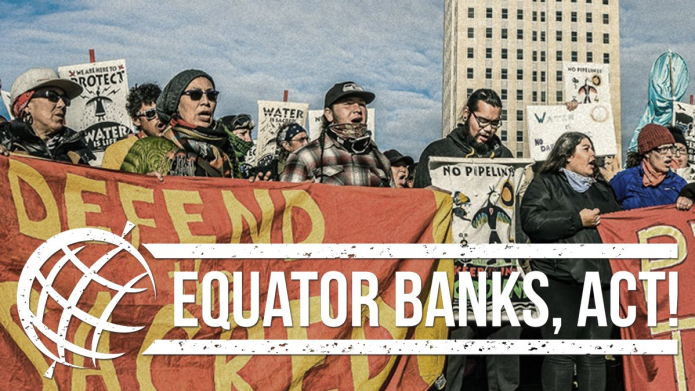 Updated with pictures and livestreamed footage from the rally.

What: This week in Washington, major global banks are meeting to revise the Equator Principles, industry-led due diligence standards that should prevent banks from supporting environmentally and socially harmful projects. At the same time, some of those same banks are re-upping their support for Enbridge, the Canadian company behind the Line 3 tar sands pipeline, which violates Indigenous rights and is flatly incompatible with the goals of the Paris climate agreement. Banks renewing their support for Enbridge comes on the heels of the publication of a landmark U.N. report showing the desperate urgency of taking concrete steps to tackle the climate crisis.

Who: The rally is being organized by the Women’s Earth and Climate Action Network (WECAN), Honor The Earth, Rainforest Action Network, BankTrack, Market Forces, Sierra Club, and Greenpeace USA.

Further Background: Major banks from the US and around the world called for a “do over” and a “second chance” after funding Energy Transfer Partners’ (ETP) Dakota Access Pipeline without the consent of the Standing Rock Sioux Tribe. After the human rights abuses at Standing Rock, banks said they would reform the Equator Principles.

The Equator Principles Association is bringing together over 90 international banks in Washington DC, Oct 16-18, who have signed on to adhere to a voluntary set of standards for financial institutions to assess social and environmental risk. These standards are intended to provide a minimum standard for due diligence and monitoring to support responsible risk decision making. Had these standards been stronger, banks would have not financed the Dakota Access Pipeline.

Banks are involved in a revision process until 2019 that could more effectively address concerns about potential rights violations and environmental degradation. Before 2019, critical projects - including ETP’s Bayou Bridge Pipeline, Enbridge’s Line 3 and TransCanada’s Keystone XL -- still receive support from Equator Principle banks. Banks must be held accountable for the funds they provide to their clients and their contributions to Indigenous rights abuses and climate chaos.

Banks were presented with an open letter in advance of the meeting, signed by 45 civil society organisations, calling on them to ensure the new version of the Equator Principles delivers strong commitments on Indigenous rights, combatting the climate crisis, full transparency and accountability. The revision process was announced at last year’s annual meeting of the Equator Principles Association after a campaign supported by over 100,000 people and almost 250 civil society groups called on the Equator banks to act to stop financing climate disasters and respect Indigenous People's rights and territories.

Analysis: The seven biggest problems with current reporting under the Equator Principles

“We keep finding ourselves campaigning against the very same environmentally destructive projects that violate Indigenous rights, yet this is exactly what the Equator Principles is supposed to safeguard against.” said Ruth Breech, Senior Climate and Energy Organizer at Rainforest Action Network. “What we need is real action for a historic redirection of capital away from fossil fuels and towards the economy of the future that protects Indigenous rights of Free, Prior and Informed Consent.”

"Dirty tar sands pipelines like Line 3 would be disastrous for our communities and our climate, and any bank that’s helping fund the companies behind these projects are complicit in the damage they cause," said Kelly Martin, Director of the Sierra Club’s Beyond Dirty Fuels Campaign. "If these banks are actually committed to addressing human rights violations and the threat of climate change, they must immediately stop supporting these dangerous projects."

"We are calling for action and accountability from the institutions enabling fossil fuel extraction to devastate the Earth and communities worldwide,” said Osprey Orielle Lake, Executive Director of the Women's Earth and Climate Action Network (WECAN) International and Co-Director of the Divest, Invest, Protect Campaign. “In a time of unprecedented and accelerating climate chaos - business as usual simply cannot continue. Indigenous peoples and Indigenous women in particular continue to experience the worst of the abuses, rights violations, and impacts of extractive industries - and despite this, are showing up with brilliant solutions, demands, and strategies to envision a just and healthy world. It is time for the Equator Principles Association to heed the calls of Indigenous peoples, and take immediate action to respect and uphold their rights and align themselves with the facts of climate change."

Johan Frijns, Director of BankTrack, said: “Equator banks at today’s meeting must realise they are at a crossroads. They either choose to approach this revision process with real ambition to deliver Equator Principles that are strong enough to ensure banks meeting the formidable social and environmental challenges of our times, or they choose a path in which this set of standards becomes obsolete and delivers neither for the environment and human rights nor as an effective risk management tool.”