This profile is no longer actively maintained, with the information now possibly out of date
Send feedback on this profile
Download as PDF Created before Nov 2016
Last update: 2018-04-30 17:07:40 Share this page: 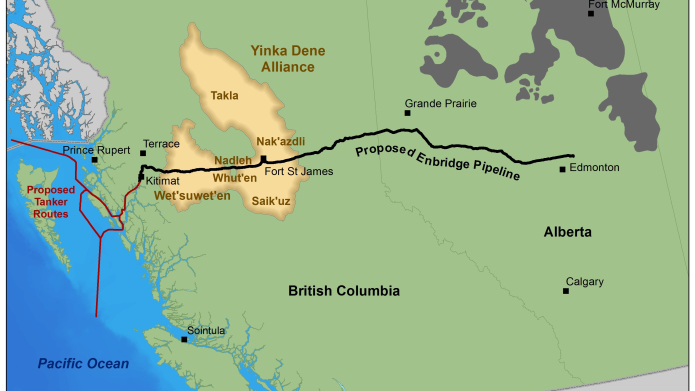 The Enbridge Pipelines involve two pipelines from Bruderheim Alberta (near Edmonton), to a new marine terminal in Kitimat, British Columbia. The East pipeline is to import natural gas condensate while the West pipeline is to export crude oil. There is also a proposition to build a new marine terminal in Kitimat. The proposing company is Enbridge Inc., a Canadian company that operates the world's longest crude oil and liquids pipeline system.

The project is planned to consist of two parallel pipelines between an inland terminal at Bruderheim, Alberta and a marine terminal near Kitimat, British Columbia in length of 1,177 kilometers both. About 520 kilometers of pipeline will run in Alberta and 657 kilometers in British Columbia. The crude oil pipeline would have a diameter of 36 inches and its capacity would be 525 thousand barrels per day. The condensate pipeline would have diameter of 20 inches with capacity of 193,000 barrels of condensate per day.  Enbridge expected these pipelines to be completed by 2015. It is expected to cost at least CAD4.5 billion.

Private banks must not participate in funding of this project, whatever forms it takes, be it project finance, general corporate loans or underwriting of shares or bonds.

Go to the full report here.

There are also many environmental concerns attached to this project. One of the biggest concerns is the threat of an oil spill and the implications this will have on the environment. Enbridge does not have a good record when it comes to oil spills. In fact, between 1999 and 2008, Enbridge lists 610 spills that released approximately 21 million litres (132,000 barrels) of hydrocarbons. The threat of a spill is heightened due to the fact that the proposed path of the Enbridge Northern Gateway pipeline will cross around 1,000 streams and rivers, including sensitive salmon spawning habitat in the upper Fraser, Skeena, and Kitimat watersheds. Five important salmon rivers that would be impacted are the Stuart River, Morice River, Copper River, Kitimat River and Salmon River. Other concerns addressed by the First Nations communities include:

Enbridge has formally withdrawn the project from the Britisch Columbia environmental assesment process. This is the expected final step in bringing the project to an end. The federal government rejected the project at the end of November. Trudeau said "It has become clear that this project is not in the best interest of the local affected communities, including Indigenous Peoples".

The Federal Court of Appeal has overturned approval of Enbridge's controversial Northern Gateway project after finding Ottawa failed to properly consult the First Nations affected by the pipeline. "We find that Canada offered only a brief, hurried and inadequate opportunity ... to exchange and discuss information and to dialogue," the ruling says (source CBC News).

Prime Minister Justin Trudeau has called for a moratorium on crude oil tanker traffic for B.C.'s North Coast. Trudeau outlined the directive in a mandate letter to Canada's transport minister, Marc Garneau, on Friday. In it, he asked Garneau to formalize the agreement with three other ministries: fisheries, natural resources and environment.

The project is moving forwards as a joint review panel hearing on the Pipeline is set to go through Whitecourt on Jan. 10, 2012. During the April 2011 election in Canada Enbridge politically backed the Conservative party and Stephen Harper, stating that this project will make Canada a world leader. Harper has shown outright support for the project and is on record stating "he did not favour turning the federal government's limited, unwritten, moratorium on oil tanker traffic off B.C.'s North Coast into an outright ban." On May 2nd Harper was elected with majority in Canada giving Enbridge the hope that the project will be pushed through.

Sinopec Corp, China's second largest oil producer and top refiner, is a member of a consortium of producers and refiners that has provided about CAD100 million to fund the line's regulatory and development costs. In doing so they are guaranteed space on the line and the right to take an equity stake. So far Sinopec is the only member of the Northern Gateway group that has been identified.

Even with the above mentioned support, Enbridge is beginning to see that the risks and oppositions are much greater than they had anticipated. They have seen legal opposition from First Nations' communities and as stated by Nikki Skuce of Forestethics "If the project isn't stopped by a First Nations legal case, it will be stopped by a federally legislated tanker ban. If it's not stopped by the environmental review process, it will be delayed by lack of shipper agreements. If all else fails, First Nations and community resistance will rise up and take action," said Nikki Skuce, in the report "Enbridge Northern Gateway Pipelines: community opposition and investment risk."

On December 4, 2009, the National Energy Board (NEB) and the Canadian Environmental Assessment Agency (CEAA) issued the Joint Review Panel Agreement and the Terms of Reference for the environmental and regulatory review for the Northern Gateway Pipelines. Enbridge Northern Gateway submitted its project application to the NEB on May 27, 2010. A Joint Review Panel, established by the Minister of the Environment and the National Energy Board, will assess the eight volume regulatory application.

Sinopec Corp., China's second-largest energy company, struck a new partnership with Enbridge Inc. It is still unknown whether the government-controlled company will invest directly in the project. So far, Sinopec is involved in the pre-stage work and providing support.

Why Northern Gateway is probably dead

The Enbridge pipeline: Northern Gateway to what?

Oil and Northern Gateway after the election

Sinopec teams up with Enbridge for Northern Gateway pipeline

Aboriginal Interest and Use Study

The Carrier Sekani Tribal Council (CSTC) has advocated for meaningful involvement of the member First Nations in any decision making process on lands & resources within their territories, including the regulatory process for the Gateway pipeline. The AIUS is meant to establish the context for any decision making process on the Gateway pipeline, but it is preliminary in nature.
http://www.carriersekani.ca/images/docs/enbridge/AIUS%20COMPLETE%20FINAL%20inc%20maps.pdf

Office of the Wer'su'wet'en - Pipelines in Wet'suwet'en Traditional Territory

Pipe up against Enbridge

The project was proposed in mid-2000s and has been several times postponed. To ensure the full utlization of the pipeline, in 2005 Enbridge signed a cooperation agreement with PetroChina. PetroChina agreed to buy around 200 thousand barrels per day transported through the pipeline. However, in 2007 PetroChina withdrew from the projects because of delays to get the project started.

June 2016, Enbridge and its partners behind the Northern Gateway pipeline are asking for three more years to build support for the controversial project, but some First Nations say their opposition will never waver. The company's Northern Gateway subsidiary and 31 aboriginal equity partners said they have asked the National Energy Board for an extension to the 2016 construction deadline to secure legal and regulatory certainty as well as continue consultations (source The Huffington Post). |The project's cost are expected to rise to USD7.9 billion.