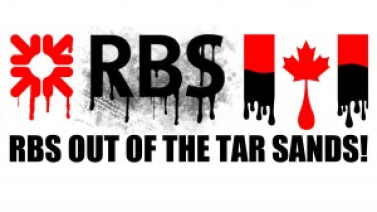 Representatives from some of Canada's First Nations are preparing to demand in person that the Royal Bank of Scotland (RBS) stops financing the controversial tar sands industry in Alberta, Canada, at the bank's AGM today.

The protest comes as new research, published by a coalition of UK and North American NGOs, shows that since being bailed out with public money in 2008, RBS has raised £5.6 billion in corporate financing to companies involved in Alberta's controversial tar sands extraction and pipeline development, £2.2 billion of which was in the last twelve months.

The First Nations representatives are expected to arrive at the AGM at RBS's global head quarters in Gogarburn, Edinburgh, at 1pm. They will take into the AGM a photo petition and motions from UK taxpayers angry that the bank is investing their money in tar sands extraction and use the meeting to call on the board to cease financing tar sands companies.

Many First Nations communities are fighting the extensive tar sands extraction on their tribal lands in Alberta, as well as the proposed 1,170 kilometre long Enbridge Northern Gateway pipeline from Alberta to the British Columbian coast, which will pass through the territories of 80 First Nations, all of whom are opposed to it.

The tar sands have been described as the most destructive industrial project on the planet.  An area larger than England is being excavated by the industry. The Athabasca river delta, once a pristine boreal forest with clean rivers and lakes, has become a devastated ecosystem of deforestation, open pit mines and toxic tailings ponds. Fish in nearby waters regularly exhibit tumours and birds landing on contaminated tailings ponds die. In neighbouring First Nations communities, where local people have hunted and fished for many years, abnormally high rates of cancer and immune system diseases are now being found.

Jasmine Thomas from the Yinka Dene Alliance is actively resisting the RBS-financed Enbridge Northern Gateway pipeline. RBS will be the fourth bank warned by the Yinka Dene Alliance over the past two months for their involvement in raising funds for Enbridge's pipeline and failure to adopt ethical policies that respects the free, prior and informed consent of Indigenous Peoples who may be impacted:

"RBS has provided finance to Enbridge, which wants to build its Northern Gateway tar sands pipelines through our territories, to carry oil through many of our critical salmon-bearing rivers. A spill will happen - Enbridge has over 60 pipeline spills each year. A single spill could destroy our way of life and our culture, so 80 First Nations in British Columbia have said NO to the pipeline. I'm here to warn RBS shareholders of the legal and environmental risks of financing such controversial tar sands companies, and to ask them to withdraw all corporate financing to Enbridge."

"Banks in Canada and in the US have been put on notice for their dirty finance of the Canadian tar sands which is resulting in the destruction of First Nations Peoples' way of life. The UK's RBS, being a majority publicly-owned bank, should be under the greatest scrutiny for its involvement in financing the Canadian tar sands and the Enbridge Pipeline corporation and its controversial proposed Northern Gateway tar sands pipeline."

The three First Nations representatives are being brought over to the UK by the Indigenous Environmental Network (IEN) and the UK Tar Sands Network and are going into the AGM as proxies for existing RBS shareholders.

Jasmine Thomas is a Dene woman from Saik'uz British Columbia, Canada. Her nation is a member nation to the Yinka Dene Alliance which includes Nadleh Whut'en, Nak'azdli, Takla Lake, Saik'uz, and Wet'suwet'en First Nations, and is a leader in the Save the Fraser Declaration, banning the transportation of Alberta tar sands through their territories.

Clayton Thomas-Muller, of the Mathias Colomb Cree Nation, is an activist for Indigenous rights and environmental justice and Tar Sands Campaigner with IEN.

Research on RBS's investment in companies working in Canadian tar sands is published by a coalition of NGOs:  the World Development Movement, Friends of the Earth Scotland, PLATFORM, People and Planet, SEAD, the Indigenous Environmental Network, the Rainforest Action Network and the UK Tar Sands Network.  Full details can be found at http://understory.ran.org/tag/rbs.

RBS is a key financial backer of Canadian firm Enbridge, which plans to build the pipeline.  RBS has raised £163 million in corporate finance for Enbridge.    Enbridge has been heavily criticised in the past for a number of oil spills from its other pipelines.   As well as passing through the ancestral lands of 80 First Nations, the Alberta to Kitimat pipeline will also cross hundreds of freshwater rivers and streams, raising concerns over pollution of rivers and drinking water.

Since the banking crisis in Oct 2008, RBS has received more than £45 billion of UK public money.  The UK government now holds an 83% share in the bank. A coalition of UK-based NGOs, including the World Development Movement, Friends of the Earth Scotland, SEAD, People & Planet, PLATFORM and UK Tar Sands Network, has been campaigning alongside the Canadian First Nations to get the UK government to use its majority shareholding in RBS to force it to change its investment criteria away from tar sands, and other fossil fuels, and to switch to financing the transition to a low carbon economy.  Most recently they have called for RBS's investment criteria to be aligned with those of the proposed Green Investment Bank, in order to boost levels of investment in low carbon energy by the magnitude required to stop irreversible climate change.

The First Nations representatives will bring motions voted on by members of the public, as majority shareholders in RBS but who are not permitted entry to RBS's AGM.  The motions call for RBS to disinvest from tar sands, coal and oil and for it to switch its investment strategy away from fossil fuels and into low carbon energy.