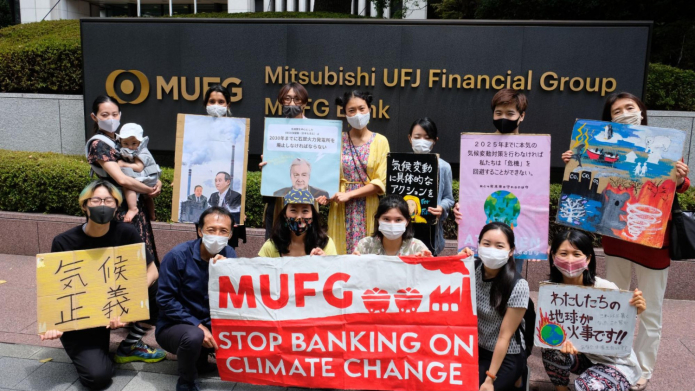 From June 17-22, activists staged a global action targeting Asia’s worst banker of climate chaos, Mitsubishi UFJ Financial Group (MUFG), demanding the Japanese megabank to stop funding fossil fuels, deforestation, and human rights abuses. Actions were held in key global centers including Tokyo, Manila, Jakarta, New York, Amsterdam, and Barcelona, as well as Brazil. The actions concluded one week before the MUFG Annual General Meeting of shareholders, where its investors will vote on the first-ever climate resolution faced by the bank.

Activists called out MUFG for being the worst Asian banker of fossil fuels since the adoption of the Paris Climate Agreement, with continued financing of coal, oil and gas expansion across the globe. Projects that received special attention included the controversial Line 3 tar sands pipeline and the East African Crude Oil Pipeline (EACOP), and the financing of coal power in Asia. Activists are also calling out MUFG and its subsidiary Bank Danamon for financing rainforest destruction, coal mining, and human rights abuses in Indonesia.

In addition to in-person actions, activists took to social media to spread the message of MUFG’s climate-destructive financing, using hashtags like #DefundClimateChaos, #EndFossilFinance, and #DefundDeforestation. A petition of nearly 20,000 signatures was delivered to MUFG’s NYC office, demanding stronger action on forests and rights, while another petition endorsed by over 143 Organizations from more than 30 countries was submitted to MUFG, calling on the bank to end fossil fuel finance.

Action photos and videos are available here. (Please refer to the date, place, and the photographers.)

More information on MUFG and its high-risk financing can be found here.

Comments from participants of the actions:

Ayumi Yamazaki from 350 New Eneration, which is a local group of 350 Japan and campaigning to tackle Japan’s addiction to coal, joined the action in Tokyo and said: “Unfortunately, the fact that Japanese banks have greatly propped up the fossil fuel industry, in Asia and globally, is a terrifying fact which people do not know unless they actively seek information. MUFG’s official website and social media channels have clean images, and at first glance, they seem that the bank has nothing to do with the climate crisis. That’s why I think we have to keep speaking up to say #DefundClimateChaos”.

Hana Heineken, Senior Campaigner at Rainforest Action Network, who joined the action in New York, said: “MUFG is trying to greenwash its climate-destructive financing with a vague 2050 commitment, while continuing its reckless financing of rainforest and peatland destruction and fossil fuel expansion projects like the Line 3 pipeline.  We’re here to say enough is enough. Real climate action needs to start right now.”

Lidy Nacpil, Coordinator of Asian Peoples’ Movement on Debt and Development (APMDD), who joined the action in Manila, said: “We sound the alarm on MUFG’s exceptions to its environmental policies — particularly on accommodating the financing of coal plants that will use technologies such as carbon capture use and storage, and mixed combustion. Even when outfitted with these technologies, greenhouse gas emissions from these coal plants will amount to levels that people and the planet cannot afford.  In time for its shareholders’ meeting, and given the urgency of the climate crisis, we challenge MUFG to stop financing coal-fired power projects without exceptions, and to also start phasing out its involvement in gas and oil projects in the region.”

Susan Tagle, Coordinator of the Asian Energy Network, also joined the action and said, “MUFG continues to be a top financier of fossil fuel projects, not only in Asia, but worldwide. This is why we have tagged it as one of Asia’s Dirty Companies. Their policies lack the needed ambition and urgency required to meet the Paris Agreement targets.”

Naifah Uzlah, a student who coordinates Fossil Free Universitas Indonesia youth community stood in the action in Jakarta and said: “We are in solidarity with the No Coal Japan coalition to encourage MUFG to end funding for coal and palm oil that is destroying the earth and the future of our generation.  We hope that by blocking the flow of money to polluters, we could also stop the projects that aggravate climate catastrophe in our country and beyond.”

Edi Sutrisno, Executive Director of TuK Indonesia, who initiated a petition on MUFG, Bank Danamon, and Indonesia’s financial regulator OJK as part of this action, said “It is shameful that MUFG has a double standard in Indonesia and allows its Indonesian subsidiary to finance climate-destroying companies using lower standards than in the rest of the world. Investors should send a clear message at the shareholder meeting that MUFG’s long term commitment is no substitute for immediate measures to stop financing rainforest destruction, fires, and human rights abuses.”

Henrieke Butijn from BankTrack, who joined the action in Amsterdam, said: “MUFG’s Net-Zero announcement and its commitment to the Principles for Responsible Banking remain hollow promises if the bank does not exclude new fossil fuel projects and projects with severe human rights impacts, like the East African Crude Oil Pipeline. This pipeline has widespread negative impacts on local communities, threatens wildlife and water sources, and will be a new source of carbon emissions. That is why we are calling on MUFG to publicly rule out financing EACOP.”