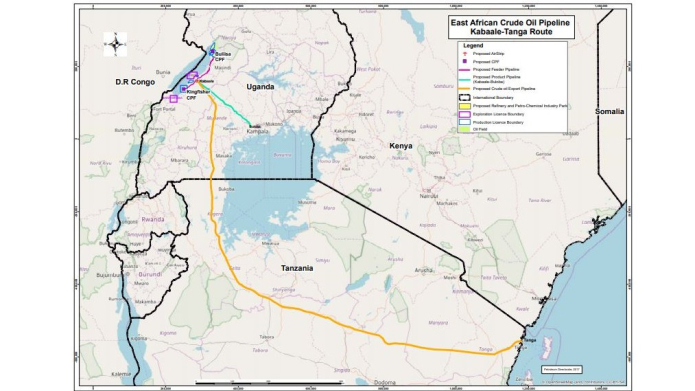 The East African Crude Oil Pipeline (EACOP) is a proposed 1,445-kilometer pipeline from Hoima, Uganda to the port of Tanga in Tanzania. Construction of the pipeline threatens to enable the opening up of critical ecosystems including Murchison Falls National Park to oil extraction. In addition it is expected to cause large-scale displacement of communities and pose grave risks to protected environments, water sources and wetlands in both Uganda and Tanzania.

Approximately 1.7 billion barrels of recoverable oil have been discovered in the Albertine Graben, the basin of Lake Albert, on the border between Uganda and the Democratic Republic of the Congo. Extraction will take place at two oil fields: the Kingfisher field, operated by China National Offshore Oil Corporation Ltd (CNOOC Ltd), and the Tilenga field, operated by Total S.A.

Once extracted, the oil will be partly refined in Uganda to supply the local market and partly exported to the international market via the East African Crude Oil Export Pipeline (EACOP). The 1,445-kilometer pipeline will transport crude oil south from Uganda for export at the Port of Tanga in Tanzania. If completed, it will be the longest heated pipeline in the world.

Both the extraction sites and the EACOP pose serious environmental and social risks to protected wildlife areas, water sources and communities throughout Uganda and Tanzania. As such, the project is facing significant local community and civil society resistance.

Oil was discovered in Uganda’s Albertine Graben in 2006 by exploration company Tullow Oil. Production licenses for the oil fields were issued by the Government of Uganda in August 2016 but commercial production has not yet begun, as it is contingent on the completion of the export pipeline. Extraction at the oil fields and the pipeline are therefore associated facilities, which should be regarded as interconnected components of one project.

EACOP is under development by the three oil companies; Tullow, Total, and CNOOC; in partnership with the Ugandan and Tanzanian state-owned oil companies. Debt financing for the pipeline (amounting to approximately USD 2.5 billion) is being arranged by Stanbic Bank Uganda and Sumitomo Mitsui.

The Inter-governmental Agreement between Uganda and Tanzania was signed in May 2017, securing the pipeline route.

The Front-End Engineering Design (FEED) for the pipeline was conducted in early 2018 by US firm Gulf Interstate Engineers, and an Environmental and Social Impact Assessment (ESIA) was provided to the National Environmental Management Authority (NEMA) in January 2019.

The pipeline’s initial projected completion date was 2020, allowing full-scale oil extraction to commence shortly thereafter in 2021. However the project has faced several delays.

As of September 2019 work on the pipeline has been suspended after the collapse of Tullow's efforts to sell its stake to the other project leads.

This project presents unacceptable risks to local people through physical displacement and threats to incomes and livelihoods; unacceptable risks to water, biodiversity and natural habits; as well as representing a new source of carbon emissions the planet can ill afford. As such banks should avoid financing this project and instead seek opportunities to finance genuine renewable infrastructure to help meet the region’s energy needs in a clean and rights-compatible manner in the decades to come.

Large scale land acquisition and resettlement in relation to oil extraction, pipeline construction and associated infrastructure is necessary on both a temporary and permanent basis, as the pipeline route traverses a number of heavily populated districts in both Uganda and Tanzania.

Land acquisition within the oil extraction zone and along the pipeline corridor will likely force resettlement of entire communities. These changes, if not managed well and with extensive community consultation and consent, could lead to increased land conflict and the erosion of cultural heritage, especially in indigenous communities. New infrastructure such as roads and settlements will likely disrupt existing community livelihoods by fuelling conflict or restricting access to natural resources along the pipeline route.

Additionally, issues of resettlement and compensation are very sensitive in countries such as Uganda and Tanzania, where land titles and rights are complex. Rights often go unrecognized and undervalued when extractive industries enter customary owned territories. Without extensive community consultation and consent over projects that concern their lives and resources, violations regarding land ownership, resettlement and compensation are likely.

Harassment and irregularities in the land acquisition and compensation process are already being reported. Local community representatives report being harassed, forced to sign different forms without clear explanation,  stamp and sign empty forms, and fill valuation forms using a pencil but sign in ink.

Oil extraction is expected to have a profound impact on livelihoods, including those reliant on agriculture, livestock rearing, and fishing communities at Lake Albert, where oil extraction will occur. The pipeline also poses a threat to the fresh water basin of Lake Victoria and to the wetlands of Tanzania, through which the pipeline is expected to run, which directly supports the livelihoods of more than 30 million people in the region.

The project also threatens the region’s thriving tourism sector, which is a source of livelihood and pride to many in East Africa. This includes the Murchison Falls National Park, Uganda’s largest park and a popular tourist destination, where 40% of Lake Albert’s oil is located. Tanzania, where 1,149 kilometres of the pipeline will be built and operated, is a country heavily dependent on tourism and on its wetland ecosystem for transport, fishing, agro-pastoral activities, hydrological processes and irrigation. For this reason the possibility of a pipeline leak leading to degradation of these key ecosystems, protected areas and wildlife habitats is not only an environmental threat, but a severe socio-economic one as well. Employment benefits brought by the pipeline project (expected to provide a total of 5,000 jobs of which only 300 will be permanent) is far overshadowed by the potential loss of jobs in the tourism sector and the social, environmental and socio-economic costs of disruption of those ecosystems resulting from the project.

Extraction at the oil fields in Albertine Graben will most directly impact the Murchison Falls National Park, posing a serious threat to biodiversity and rare and endangered species. Moreover, important tributaries of the Nile flow nearby, and oil spills and other pollution affecting the river could have profound impacts as distant as North Africa. Pollution of these rivers can put severe pressures on all users - from individuals, to businesses and governments - leading to an increase in cross-border conflicts.

Pipeline: According to a preliminary environmental and socio-economic threat analysis conducted by WWF, the pipeline also poses far reaching and extensive environmental threats to the East African region, including:

The probability of a pipeline oil spill is high, given that about a third of the pipeline is located in the Lake Victoria watershed, an active seismic area.

Ramsar Wetlands: Both components of the project will directly impact several Ramsar Wetlands of International Importance. (The Ramsar Convention is an international treaty for the conservation and sustainable use of wetlands.) Oil extraction will take place within the Murchison Falls-Albert Delta Wetland System, a Ramsar site that plays an important role for wildlife in the National Park and is a spawning ground for indigenous fish species. The pipeline will also run near or through a number of Ramsar sites that lie just west of Lake Victoria, including Mabamba Bay, the Lake Mburo-Nakivali System, the Lake Nabugabo System, the Nabajjuzi System, and the Sango Bay-Musambwa Island (e.g. see Daily Monitor, August 2019). Several potential financiers have policies restricting them from financing operations that adversely impact Ramsar sites.

Oil extraction often causes disproportionate impacts on women, who often carry the burden of relocation and change in society while not benefiting from new employment opportunities. It has also been reported that where extractive industries operate there is often a rise in levels of prostitution and gender-based violence. According to ActionAid’s report on the human rights impact of Uganda’s oil sector, the sex trade in Hoima, where extraction at Lake Albert will occur, has significantly increased over the last several years due to the discovery of oil.

TOTAL suspends work on EACOP after collapse of deal with Tullow

All work on EACOP has been suspended after Tullow Oil’s plan to sell a stake in the project to Total and CNOOC was called off last week. “All East African Crude Oil Pipeline (EACOP) activities including tenders have been suspended until further notice because of the collapse of the deal,” an official told Reuters.

The NCEA concluded that "the ESIA report does not yet provide enough information for sound decision making", citing exaggerated claims about jobs and other economic benefits; significant potential negative impacts to wetlands due to open trench water and wetland crossings; unsubstantiated claims of negligible impacts on land ownership; and insufficient treatment of energy/CO2 impacts. NCEA also notes that the cumulative CO2 emissions of all oil development projects (Tilenga, Kingfisher, Refinery, EACOP etc.) have not been presented.

In May 2019 a coalition of African and international organisations wrote to South Africa’s Standard Bank and Japan’s Sumitomo Mitsui Banking Corp (SMBC) calling on the banks to withdraw from financing the East Africa Crude Oil Pipeline. Download the letter here. The letter was raised in a question by JustShare at Standard Bank's AGM, with the bank's CEO Sim Tshabalala responding that the bank would meet with local people opposed to the pipeline. The question and response were reported here.

Tullow agreed to pay $167m capital gain tax to the Uganda Revenue Authority for its farm-down in the East African Crude Oil Pipeline. In January 2017, Tullow signed a sale purchase agreement to sell 21.57% of its 33.33% share to CNOOC (China National Offshore Oil Company) and Total E&P. Tullow bargained over tax for almost two years with the Ugandan government until it found an agreement in February.

Stanbic Bank Uganda and Sumitomo Mitsui Banking Corp expect to raise USD 2.5 billion funding for the 1,455km East Africa Crude Oil Pipeline by June 2019.  The remaining 30% of the total costs of the pipeline (USD 3.5 billion) will be provided by the equity investors in the project. The banks previously planned to raise $2.5 billion.

The Environmental Social Impact Assessment (ESIA) report for the pipeline has been finalized and handed over to the National Environmental Management Authority (NEMA). A summary can be found here. Meanwhile the governments of Uganda and Tanzania have agreed on several issues but will still need to decide on arbitration. Production is likely to start in 2022.

The East Africa Crude Oil Pipeline (EACOP) is expected to cost approximately USD 3.5 billion, 30% of which will be provided by the equity investors in the project. The remaining $2.5 billion will be provided via project finance loans.

Recent financiers of CNOOC and Total include:

CSOs ask the National Environment Management Authority (NEMA) not to approve the report since it was undertaken by an unregistered environmental practitioner contrary to the law.
2019-11-26 | AllAfrica
blog
external news
our news

We must conserve our wetlands

Standard Bank shareholders defy board in vote for greener disclosure

They want the bank to adopt a policy on lending to coal operations.
2019-05-31 | Moneyweb
blog
external news
our news

Uganda expects first oil production to be delayed to 2022 - minister

Serious breaches of the Duty of Vigilance law : the case of Total in Uganda

Map of Ramsar Wetlands in Uganda