Home › News
The Industrial and Commercial Bank of China should finance a green and low-carbon future, not the East African Crude Oil Pipeline
主题:请求中国工商银行资助绿色低碳未来, 而不是东非原油管道
By: #StopEACOP
2021-10-29 Contact: 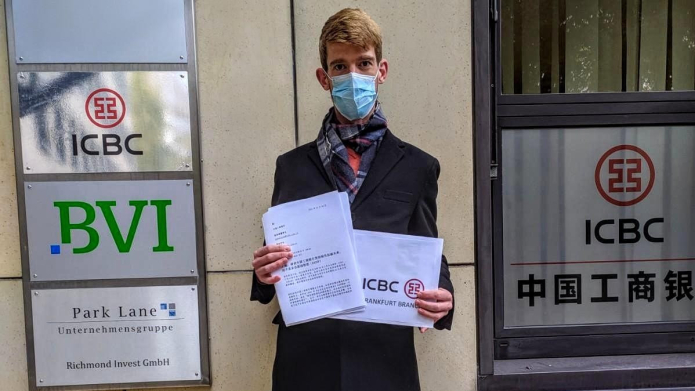 Today members of the #StopEACOP campaign represented by 61 civil society organisations (CSOs) from Uganda, Tanzania, DR Congo and Kenya, wrote to the Industrial and Commercial Bank of China (ICBC) expressing their concerns about its role as a financial advisor and its potential participation in a $2.5 billion project finance loan for the development of the East African Crude Oil Pipeline (EACOP) project.

The letter was sent to ICBC via email and hard copies were delivered to ICBC Paris and ICBC Frankfurt offices.

The proposed 1,443-kilometer crude oil pipeline from Hoima in Uganda to the port of Tanga in Tanzania would be the longest heated crude oil pipeline in the world. The risks of this project to people and nature in the affected countries and the world’s climate are significant. They  include impacts on local people through physical displacement and disruption to incomes and livelihoods; risks to water, biodiversity and natural habitats; as well as unlocking a new source of carbon emissions that will produce unacceptable climate harm. These risks may contribute to making the project financially unviable in the long term.

ICBC, South Africa’s Standard Bank (which is 20% owned by ICBC), and SMBC are acting as advisors to the EACOP project to help it secure the $2.5 billion project loan required for construction.

China has recently made a number of important commitments concerning climate change, including President Xi Jinping’s recent  statement during the UN General Assembly that “China will step up support for other developing countries in developing green and low-carbon energy, and will not build new coal-fired power projects abroad”.

In addition, ICBC’s commitment to the UN’s Principles for Responsible Banking, as a founding signatory, is a welcome step towards aligning ICBC’s portfolio towards climate-mitigating, sustainable development in line with the Paris Agreement.

To honour these important commitments, ICBC should not move forward with financing this project. Instead, ICBC, alongside other Chinese financial institutions, should work with Chinese and local stakeholders to seek opportunities to finance genuine renewable infrastructure to help meet the East African region’s energy needs in a clean and rights-compatible manner in the decades to come.

Omar Elmawi, Coordinator of the #StopEACOP campaign, stated, “ICBC has an opportunity to be a climate leader and invest in community-led renewable energy options. Should they do so, they will have the communities support and blessings. But it does not look like they are hearing us.”

Prince Papa, Programs coordinator-Africa, Laudato Si Movement, stated, “As banks, countries and insurance companies are moving in haste to declare their climate commitments as we approach COP 26 in Glasgow, ICBC seems to be doing the opposite. We as the people to be most affected by EACOP urge ICBC not to move forward with financing this project and to take real climate action instead.”

#StopEACOP is a global campaign against the construction of the East African Crude Oil pipeline (EACOP), a proposed 1,443-kilometer heated pipeline that will transport oil from Hoima, Uganda, to the port of Tanga in Tanzania. The campaign is led by an alliance of local groups and communities and African and global organisations. Over 260 organisations have endorsed and are working towards realising the campaign objectives through public mobilisations, legal actions, research, shareholder activism, and media advocacy.