Home › Blog
Who will finance the East African Crude Oil Pipeline?
Fifteen banks are out, but who is in? JPMorgan, Deutsche Bank, MUFG and Natixis are among those with questions to answer.
By: Ryan Brightwell – BankTrack
2022-02-10 Share this page: 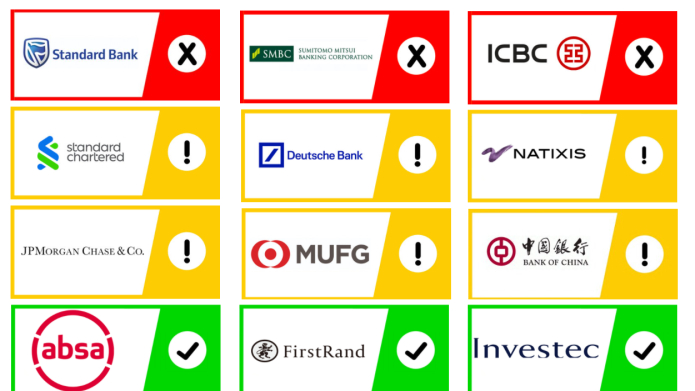 On 1st February in Kampala’s Kololo Independence Grounds in Uganda, the long-awaited and much-delayed Final Investment Decision was signed on the East African Crude Oil Pipeline (EACOP) and the oil fields that will feed it. The ceremony was designed to signal that the companies are determined to proceed with this project, despite the immense risks to people, nature and climate. Among other dangers, the pipeline will open up the Murchison Falls National Park to oil extraction, cause tens of thousands to lose their land, interrupt forests and important wildlife migration routes, and snake along the basin of Africa’s largest fresh-water lake.

But amid all the speeches, neither TotalEnergies nor the China National Overseas Oil Company (CNOOC) – the companies building the pipeline – nor the host governments of Uganda and Tanzania, had anything to say about the US $3 billion project loan that this pipeline needs to proceed. Could it be that they are still struggling to find enough banks that are reckless enough to finance what has become the continent’s most controversial energy project?

As early as 2017 it was reported that three banks, South Africa’s Standard Bank (via its Ugandan subsidiary Stanbic), Japan’s Sumitomo Mitsui Banking Corporation (SMBC) and the Industrial and Commercial Bank of China (ICBC), were acting as the financial advisors to the project. Their role is to help arrange and structure a loan for the project, but they will need a long list of banks – a dozen or more – to join them to get this US $3 billion in place.

Ever since then, BankTrack and allies, as part of the global StopEACOP coalition, have been contacting banks that might be likely to join this loan consortium, to alert them of the multitude of risks posed by the EACOP – to communities, nature, wildlife and the climate, as well as legal, reputational and stranded-asset risks to the project and the banks themselves.

We’ve published two risk briefings on the project and sent 25 of the most likely financiers an open letter signed by over 260 organisations, more than 100 of which are Africa-based. And we’ve kept the banks updated as new risks and impacts emerge, as they have on a regular basis – for example as Uganda’s government has cracked down on local and national organisations that speak out against the pipeline, with attempts to shut groups down and spurious arrests.

The banks that have already said “no”

So far, fifteen banks have made clear they won’t finance the project, either with public statements or, in the case of the “big three” banks in Total’s home country of France (BNP Paribas, Crédit Agricole and Société Générale), coordinated anonymous tips to the media. This is a marker of how sensitive the topic is – banks have to weigh the reputational risk of being associated with the project against the risk of upsetting an oil major and risking future business. But as time passes, the balance of risk is tipping, and not in Total’s favour.

The banks that have sworn off include eight of Total’s largest 15 financiers, according to data collected for the 2021 Banking on Climate Chaos report. Beyond the French banks, these include Barclays, HSBC, Credit Suisse and Mizuho. In addition, all of the large South African banks besides Standard Bank (ABSA, First Rand, Nedbank and Investec) have recently made clear they are not involved, leaving Standard Bank out in the cold. Outside the banking sector, the UK export credit agency UKEF, the African Development Bank and the major insurers Zurich, AXA and Swiss RE, have also joined the crowd of financial institutions that are not prepared to support the project.

With fifteen banks that we know are out, the big question is, who is in? This is something we know less about. Standard Chartered, a British bank with colonial roots in South Africa, told us that it is considering supporting the project, if it decides it meets its policies. The bank has been commendably open in stating this publicly, and has been prepared to have several discussions with us and Ugandan partners about its risks.

However, the fact that the bank is prepared to even consider financing an oil pipeline that will lead to new carbon emissions estimated at over 34 million tonnes a year, at the same time as chairing the Net Zero Banking Alliance, under which banks aim to bring their CO2 emissions down to net zero by 2050, is astounding. The bank also has a policy in place prohibiting finance for “clients who … have operations that are located within, or significantly impact negatively upon wetlands designated under the Ramsar Convention on Wetlands of International Importance.” The EACOP will open up the Murchison Falls National Park – a Ramsar site – to oil drilling, and the respected Stockholm Environment Initiative has identified at least two other Ramsar sites as “at risk” from the project. As investment dilemmas go, this seems pretty straight-forward.

The banks that have said nothing: JPMorgan, Deutsche Bank, Mitsubishi UFJ and Natixis

With eight of Total’s biggest financiers crossed off the list, what about the rest? In the course of the last two years, we’ve had conversations with some of these banks on a confidential basis. However, several banks have stayed extremely quiet, with multiple efforts at engagement soliciting only an insistence that they cannot possibly comment.

The most worrying are JPMorgan Chase, Total’s largest US financier (and the world’s worst fossil bank); Deutsche Bank, the largest European financier left in the picture, and Mitsubishi UFJ, the only one of the big three Japanese banks whose position is unknown. These banks have marked themselves out by their refusal to discuss their position on the project, and have questions to answer to their customers and investors.

Natixis, the 17th largest financier of Total in recent years, has also declined to join its French competitors in making its position on the project known, and is understood to have been approached to join the project loan. Its reputation will also be on the line if it becomes the only French bank to support the project.

Top 15 Financiers of TotalEnergies, from Banking on Climate Chaos 2021.

Alongside private sector banks, the project parties have been looking to European Export Credit Agencies (ECAs) to finance the pipeline. Back in November 2020, the industry news outlet Upstream Online reported that the project could largely be financed through ECAs, “most likely from France, Italy, Germany and the UK". Since then, the UK’s Export Credit Agency, UKEF, has declared itself out after it decided, following considerable campaign pressure, to cease funding all new overseas oil and gas projects.

France, Italy and Germany are all among the countries that signed on to a new commitment in Glasgow to “end new direct public support for the international unabated fossil fuel energy sector by the end of 2022, except in limited and clearly defined circumstances that are consistent with a 1.5°C warming limit and the goals of the Paris Agreement.” Plenty of caveats in there, not least of which is the end-of-2022 deadline. These countries could try to squeeze EACOP financing in before the deadline, and Italy’s ECA, SACE, is known to have been approached.

The French government, put under pressure by French civil society and targeted in a report over its support for Total’s investments in Uganda, has stated a couple of times that it was not currently giving public financial support to EACOP, but has never explicitly committed not to give an export credit guarantee in the future.

Last but not least, there’s the Chinese state-owned commercial banks, which dominate the list of the largest commercial banks in the world, and which are notoriously difficult to engage with – also by the standards of other Chinese companies. None of these have responded to enquiries on the EACOP, but the Agricultural Bank of China, Bank of China, and China Construction Bank have all been recent financiers of China’s CNOOC, a minority shareholder in the pipeline, and have financed other fossil fuel pipelines globally.

While these banks do not publish detailed public policy standards, they are supposed to adhere to the China Banking and Insurance Regulatory Commission’s Green Credit Guidelines, which urge lending institutions to conduct proper due diligence and “regard how well clients have managed environmental and social risks as important basis for credit funds appropriation” – as Inclusive Development International’s Erik Myxter-lino pointed out in China Dialogue.

A recent article in The East African quoted anonymous “industry sources” as saying China is now “the only realistic option” for financing – but with China’s CNOOC having only an 8%  shareholding in the project, will China want to be saddled with all the risk?

Banks should finance a just transition, not the EACOP

The fifteen banks saying “no” to EACOP are right to do so, but the alternatives to the dead-end route of fossil fuel based development also need finance. Banks, including development banks, need to step up and provide capital to Uganda and the wider East African region that supports a different development path, based on the region generating its own clean energy for its own people.

Meanwhile, Total and its partners may still be able to cobble together a coalition of the world’s more reckless and unscrupulous financiers to ensure it can reach “first oil” by 2025 as it has promised. However, the banks in question will be opening themselves to severe criticism, complaints and possibly litigation when the risks of the project crystallise. They can’t say they were not warned.