Home › News
#StopEACOP campaign calls on Standard Bank to come clean about its funding of the East African Crude Oil Pipeline
By: #StopEACOP
2022-08-22 Share this page: 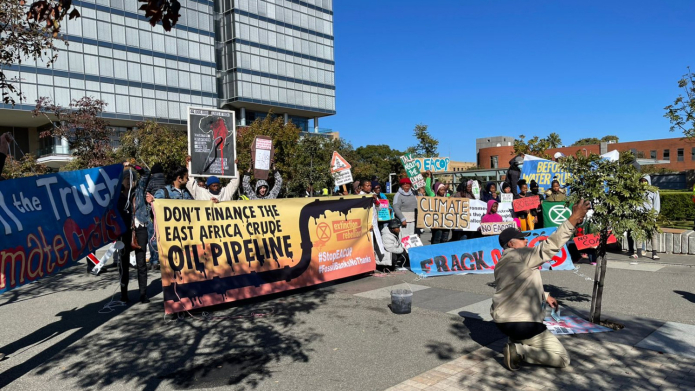 #StopEACOP commends Edelman for distancing itself from the bank over its role in the project.

Although Standard Bank remains tight-lipped in relation to its funding of EACOP, the media reports regarding Edelman appear to confirm #StopEACOP’s understanding that Standard Bank does intend to finance the pipeline.

The risks of funding EACOP are intensifying. Edelman’s withdrawal illustrates that these include significant reputational risks. #StopEACOP urges all Standard Bank customers, service providers, employees and shareholders to speak up against the project and the bank’s involvement in it.

The severe environmental, human rights, climate, legal, and commercial risks and impacts of EACOP are summarised in this series of finance risk briefings. Globally, 20 banks (including Total’s seven largest financiers) have made clear they will not finance the project, as have eleven insurers or reinsurers, several development finance institutions and four export credit agencies. Growing opposition to EACOP will continue to intensify the reputational and other severe risks it poses for Total, and the banks, investors and insurers backing the project.

Duncan Meisel, Director, Clean Creatives, says: “Fossil fuel projects like EACOP are a threat to the reputation of any company that promotes or funds them. Edelman’s decision not to work on this project is the right one, because it separates them from the countless local disasters caused by pipeline construction and operation – not to mention the carbon pollution EACOP will produce. During a climate emergency, ending support for life-threatening projects such as EACOP, and the fossil fuel companies behind them, is the cornerstone of responsible business practice.”

For several years now, Standard Bank has been evasive regarding the status of its financing of the project. Together with Sumitomo Mitsui Banking Corporation (SMBC) and the Industrial and Commercial Bank of China (ICBC), it acts as a financial advisor for the project.

Standard Bank has publicly stated that its participation in EACOP remains subject to the findings of environmental and social due diligence assessments of the project’s compliance with the Equator Principles.  At its 31 May 2022 AGM, the bank’s CEO, Sim Tshabalala, committed to making public the long-awaited Social and Environmental Consultant’s report into the EACOP project, commissioned by Standard Bank and conducted by Golder Associates. The bank has so far failed to meet this commitment and the bank has not responded to recent requests from organisations within the #StopEACOP campaign for an update on the status of this report.

A recent report by the Africa Institute for Energy Governance (AFIEGO), Inclusive Development International (IDI) and BankTrack demonstrates that banks supporting EACOP would be in non-compliance with their commitments under the Equator Principles, a risk management framework for financial institutions to identify, assess and manage environmental and social risks.

In other words, irrespective of what the yet-to-be-disclosed environmental and social report states, EACOP has now been shown to violate the Equator Principles. Given the bank’s commitment only to support the project if it complies with these Principles, this finding provides a further compelling reason for Standard Bank to back away from financing EACOP.

It is time for transparency. #StopEACOP calls on Standard Bank to publicly confirm – and explain – its position, and to end the prevarication and evasiveness which has characterised its responses to civil society for a number of years.