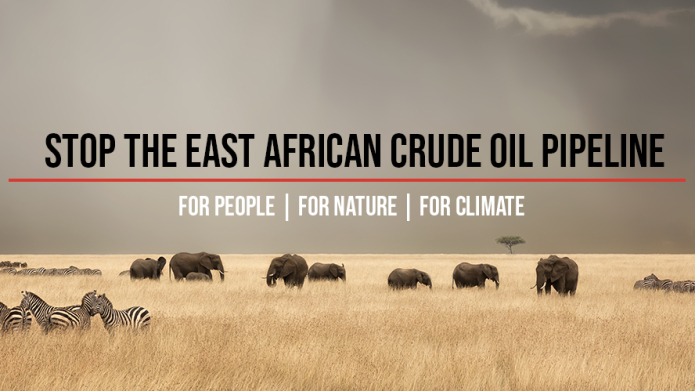 TotalEnergies and China National Offshore Oil Company (CNOOC) announced today, over 15 years after commercial oil was discovered in Uganda, that they have reached a Final Investment Decision (FID) on the East African Crude Oil Pipeline (EACOP) and associated projects. However, activists opposed to the pipelines say there is still a long way to go for the project to be realized, as partners are yet to reach financial close - which refers to execution and delivery of financing and other agreements related to the project.

Owing to the continuous opposition of the pipeline and associated projects by local communities in Uganda and Tanzania and pressure from climate and human rights activists and organizations in both countries, 11 banks have in the past confirmed that they would not finance EACOP, while three insurance companies, the African Development Bank and the UK’s Export Credit Agency have also said they will not get involved. Whether or not the project goes ahead, will largely depend on the ability to reach financial close and raise the $3.5 - 5 billion for EACOP and an estimate of between $15 to 20 billion that needs to be invested in Uganda before they can start oil production.

Nakabuye Hilda, Fridays For Future Uganda stated, “The EACOP project poses grave risks to the world’s climate. In my home village, people are already displaced, their incomes and livelihoods affected, unacceptable risks to water resources, biodiversity and natural habitats. At a time where climate catastrophes are worsening, unlocking a new source of carbon emissions that will either prove financially unviable or produce unacceptable climate harm puts millions of lives at stake and is a mockery for the existence of generations to come.”

Landry Ninteretse, 350Africa.org Regional Director, said, “Signing the FID is far to be a definitive step toward the operationalisation of the controversial project. So far, people's power and increased pressure exerted on banks behind the EACOP have resulted in a good number of financial institutions distancing themselves from it. Together, we can further pressure the reluctant ones, stop this fossil finance flowing into the region and expose TotalEnergies, a company which has been previously associated with opaque contracts, lack of accountability and violation of basic rights of grassroots communities across Africa and beyond.”

Omar Elmawi, the Coordinator of #StopEACOP, said, “There is still hope to avert this pipeline that threatens the social, environmental, cultural, health, livelihood, climate and economic impacts to both Tanzania and Uganda and its citizens while most, if not all, the economic benefits find their way to Total Energies and CNOOC.”

Ryan Brightwell, BankTrack stated, “Despite the show of progress with today’s Final Investment Decision, Total and CNOOC are staying quiet on the crucial question of where the money will come from for their incredibly risky pipeline plans. Eight of Total’s biggest 15 bankers have already said “no” to the EACOP pipeline. With the Ugandan government cracking down on dissent, arresting critics and attempting to shut down groups working peacefully to support oil-affected communities, not to mention huge risks to communities, nature, water and the climate, no wonder the project is struggling to find financiers unscrupulous and reckless enough to back it.”

Juliette Renaud, senior campaigner at Friends of the Earth France, said “Total and its partners continue their greenwashing, proudly announcing the final investment decision for Tilenga and EACOP as if everything was fine with these projects. But ignoring the increasing human rights violations and huge environmental and climate risks won’t make them disappear. While the civil society mobilization denouncing these devastating impacts is growing every day in East Africa and in France, Total will be compelled to be accountable for its actions and to give answers in a court hearing in France in the coming months.”

The #StopEACOP coalition and partners have continuously written and invited the public to write to potential bank financiers and insurance companies to stay clear of the EACOP. The coalition calls on financiers, insurers, communities and others to keep rejecting the risky and exploitative project.

Notes to the editor

About EACOP
TotalEnergies and partners aim to construct a 1443-km crude oil pipeline and infrastructure to transport Uganda’s crude oil from Hoima in Uganda to Tanga in Tanzania. If constructed, this would be the longest heated crude oil pipeline in the world, producing an estimated 34 million tonnes of carbon emissions annually. The project has already displaced thousands and threatens the water resources, livelihoods of millions of people in the Lake Victoria basin, as well as wildlife.

To put this to perspective, many projects have managed to reach FID but fall short of financial close. An example is the Lamu Coal Plant in Kenya. The proposed 1,050 MW plant reached FID in 2015,  but is yet to reach financial close 7 years later, and increasingly seems unlikely to proceed, due to community opposition and legal battles.

For more information about the StopEACOP campaign visit https://www.stopeacop.net/