Home › News
Standard Chartered Bank hit with protests on opposite sides of the world as fossil fuel vote approaches
It's the only UK bank facing a shareholder-proposed climate change resolution at its AGM this year
By: Market Forces
2022-04-19
Jakarta, Kalimantan, London
Share this page: 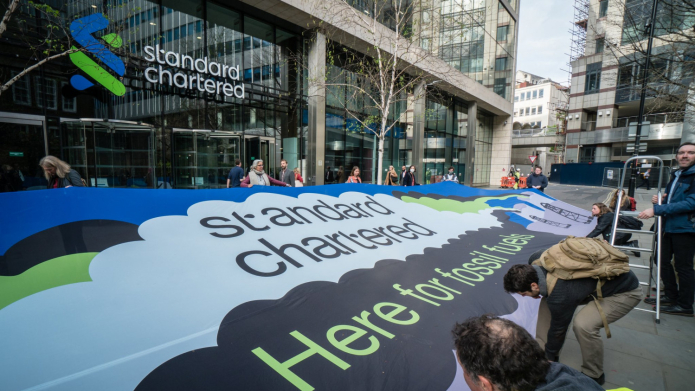 As Standard Chartered’s Annual General Meeting approaches on 4th May, people on both sides of the planet took action to call on the bank to end its finance for the expansion of fossil fuels. In London, protesters unfurled a huge 20-metre banner calling on the bank to stop funding fossil fuels. In Jakarta and Kalimantan, Indonesian protesters demanded the bank stop funding coal companies like Adaro, which the bank’s own research shows is aligned with 5-6°C of global warming.

Market Forces and Friends Provident Foundation have filed a shareholder resolution calling for Standard Chartered to align its financing with the goal of net zero by 2050. Standard Chartered claims to support net zero by 2050, despite continuing to finance companies and projects that expand the scale of the fossil fuel industry. The International Energy Agency (IEA) stated last year that meeting the net zero goal means no new coal mines, coal plants or oil and gas fields can be brought online, and warns that many of the new LNG terminals currently proposed are not needed. The shareholder resolution calls on the bank to align itself with the IEA’s net zero scenario.

Standard Chartered is the only UK bank facing a shareholder-proposed resolution on climate change at its AGM this year.

The resolution proponents point out that although the bank has a net zero by 2050 target, its actions do not match its rhetoric, given that the bank has:

The bank’s management has filed its own shareholder proposal (Resolution 31 in the Notice), asking shareholders to endorse its current plans, which Market Forces has demonstrated falls well short of the goal of net zero by 2050.

Larger banks than Standard Chartered are also forging ahead with bolder climate policies, such as ING Bank, which this month pledged to end all financing of new oil and gas projects.

All over the world, communities want the bank to change – and shareholders have an opportunity to make the bank change.

“Financing Adaro means ensuring the climate crisis worsens. Indonesians, especially young people, have been increasingly aware of the dangers of the climate crisis. Banks and investors have to choose whether they want to invest in humankind or support the coal elite,” says Jeri Asmoro, digital campaigner at 350.org Indonesia.