Lynda Belaïdi,
Press officer Milieudefensie (Friends of the Earth Netherlands),
+31 6 386 14 206,
based in the Netherlands. 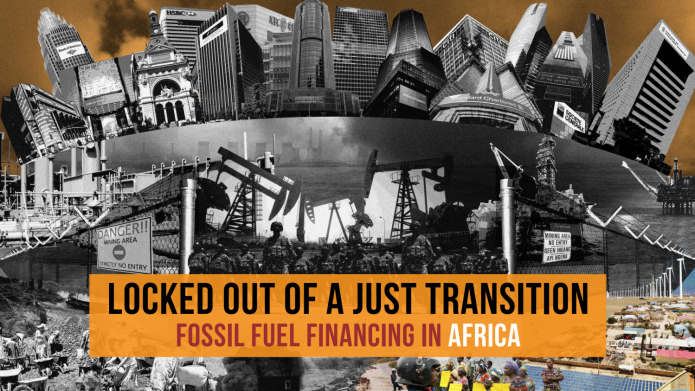 Cover of the report 'Locked out of a Just Transition: fossil fuel financing in Africa'. Photo: Graeme Arendse

The Intergovernmental Panel on Climate Change’s new report, published on Monday February 28, once again confirms that the climate crisis disproportionately affects African countries. It further demonstrates that climate impacts will worsen sooner than previously predicted and that worldwide action is more urgent than previously assessed. And yet Africa is host to a growing number of oil, gas and coal projects. New research published today by BankTrack, Milieudefensie, Oil Change International and 19 African partners (1), including 350Africa, Alliance for Empowering Rural Communities (AERC) from Ghana, and WEP Nigeria, reveals the billions of dollars in finance, the majority from European, Asian and North American financial institutions, that are putting the continent in danger of becoming locked into fossil fuels, despite its massive potential for renewable energy. As a result, Africa runs the risk of not being able to make the necessary leap to sustainable energy in time.

Between 2016, following the adoption of the Paris Climate Agreement, and June 2021, public and private financial institutions poured at least $132 billion in lending and underwriting into 964 gas, oil and coal projects in West, East, Central and Southern Africa. The vast majority of this finance came from financial institutions based outside Africa, both commercial banks and public institutions such as development banks and Export Credit Agencies.

The fossil fuel industry as well as financiers often claim that fossil fuel projects contribute to Africa's economic and social development, however the evidence of the projects highlighted in this study, including Mozambique LNG and Offshore Cape Three Points in Ghana, indicate that this is a myth. Despite the many fossil fuel developments, Africa remains the continent with most people living in energy poverty. Poor contract terms, debt traps, and disproportionate ownership by foreign multinationals means the industry mainly serves the interests of companies and nations outside of Africa, with African people and African governments bearing the risks. Instead of bringing development, fossil fuel projects often have severe impacts on local communities and the environment. New fossil fuel projects also risk locking countries into fossil fuel dependency. Stranded assets combined with growing national debt and government deficits, could generate a dangerous ripple effect leading to massive unemployment and rising poverty, locking countries into a vicious cycle of poverty for decades to come.

Risks for the financial sector

For financial institutions, providing financial support to oil, gas and coal projects is also increasingly becoming a risk. With the energy transition accelerating and the production costs of renewable energy rapidly dropping compared to fossils, these projects are increasingly at risk of ending up as stranded assets. Meanwhile, climate change litigation around the world is forcing companies to reduce their emissions output. And the risk of reputational damage has been heightened in recent years by the lack of transparency, corruption, illicit financial flows and serious environmental and human rights violations that characterise this sector in Africa. Further, a failure to limit global warming will present a systemic threat to the whole global financial system.

A Just Transition for Africa

The African partners of this report, as well as recent publications by African networks and civil society organisations, emphasise that the injustices that have plagued the African continent for so long will persist without a Just Transition approach to renewable energy - an approach rooted in environmental, social, political, economic and gender justice. As such, the report puts forward eight Principles for a transformative Just Transition approach to renewables.

In a Just Transition there is eventually no room for fossil fuels. Public and private financial institutions must immediately stop financial support for new oil, gas and coal projects and phase out the existing support for fossil fuels. Instead, finance should be redirected to renewable energy sources, such as solar and wind energy. A Just Transition furthermore requires a shift of ownership of these renewable energy sources from large multinationals to African communities.

Such a major turnaround requires strict legislation from governments worldwide on mandatory human rights and environmental due diligence to make sure the mistakes of the fossil fuel era will not be repeated, giving African countries the prospect of a green, resilient and sustainable future.

Landry Ninteretse, 350Africa.org Regional Director: “Africans are experiencing severe climate impacts driven by high emissions from the biggest polluters in the developed world. Wealthy countries of Europe, North America, East Asia and Australia, historically big emitters, have not only the responsibility to fund the Just Transition and energy transition plans that African countries are committing to implement, but also to halt any new investments in the fossil fuel industry. It’s time for governments and financial institutions to starve fossil fuels and redirect funding towards this transition to sustainable, clean energy, instead of locking African nations into fossil fuel dependency.”

Henrieke Butijn, Climate campaigner and researcher at BankTrack and lead author of the report: “Commercial banks like JPMorgan Chase and Standard Chartered can make all the Net-Zero pledges they want but these pledges will not automatically lead to the much-needed short-term steps in ending fossil fuel financing and much less to a true Just Transition. Banks need to start thinking beyond fossil fuel divestment and renewable energy as the new business-as-usual opportunity and focus on what truly benefits African countries and communities now and in the long-term.”

Isabelle Geuskens, Senior Program Officer Just Transition at Milieudefensie and lead author of the report: Africa is the continent with the most renewable energy potential. But it has not been able to tap into it and build towards the more resilient and sustainable future it urgently needs, given the many climate challenges it is and will be facing. Meanwhile our financial institutions and industries continue fuelling the fossil fuel development myth and pour billions of dollars into new fossil fuel projects, locking the continent into fossil fuel dependency and a stranded future. A Just Transition for Africa means stopping fossil fuel finance and contributing to a renewable energy future that benefits African people first and foremost.

Anabela Lemos, Director JA! Justiça Ambiental/FoE Mozambique: “Mozambique and its people are in the tragic situation of being devastated by both the causes and effects of the climate change crisis. One of the major causes of the climate crisis is the extractive industry, and right now the gas rush in Mozambique is causing land grabs, destroyed livelihoods, human rights abuses, militarization and conflict. At the same time, Mozambique is one of the countries most affected by the impacts of climate change, with increasing floods, cyclones and droughts that have already killed, displaced and affected hundreds of thousands of the most vulnerable and poorest people. We must break this cycle of injustice and inhumanity, by stopping the gas projects in Mozambique and around the world.”

Aly Marie Sagne, Director and founder of Lumière Synergie pour le Développement (LSD): “Africa is experiencing the severe impacts of the climate crisis while at the same time, African leaders like Senegalese President Sall are championing a false solution about “an energy transition taking into account oil and gas investments”. In the meantime, the African Development Bank, the major Development Finance Institution of the continent, is navigating between green and dirty energy financing options. LSD believes that each degree of additional CO2 emission counts and a just energy transition in Africa should therefore be moving away from fossil fuels. LSD is pushing the AfDB to increase the proportion of renewable energy projects in its portfolio to 70% by 2025!”

Bronwen Tucker, Public Finance Campaign Co-Manager at Oil Change International said: “The resources and profits from fossil fuel projects in Africa have overwhelmingly flowed out of the continent rather than providing energy access or public goods. Now, wealthy countries are locking in a risky and unequal future on the continent by continuing to finance four times as much fossil fuels as renewables with their public finance institutions. These governments must get out of the way of a just transition in Africa by ending their fossil fuel finance and dramatically scaling up their climate finance and debt cancellation instead.”