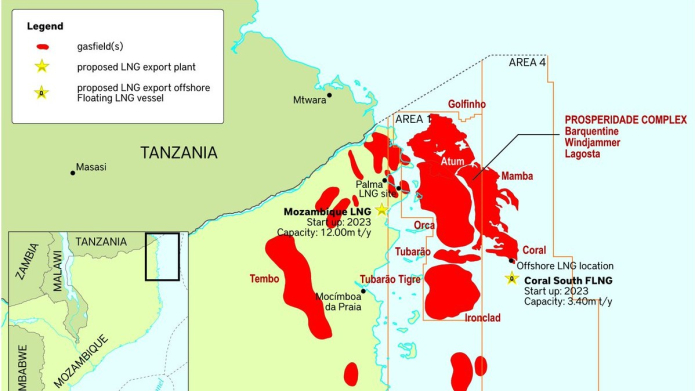 The Mozambique LNG Project will involve the extraction, liquefaction and transportation of gas from the Area 1 gas fields offshore from northern Mozambique. Gas will be extracted from 20 offshore wells and transported via a 40 kilometer pipeline to an onshore liquid natural gas (LNG) facility covering an area of 17,000 acres. Here the gas will be liquified and stored in two large tanks. A pipeline will transport the LNG to tankers for export to India and other countries.

The project is estimated to cost USD 23 billion.  Final investment decision was reached in June 2019.

The LNG facility is expected to produce 12.88 million tonnes per year of LNG in its initial phase, which can be expanded to 50 million tonnes.

The Mozambique LNG (Liquid Natural Gas) Project will facilitate the export of an enormous quantity of gas located in the gas fields of Area 1 of the Rovuma basin off the coast of northern Mozambique. In the process it will have serious adverse impacts on ecosystems and wildlife, will lead to the forced displacement of thousands of people, and will release millions of tonnes of greenhouse gases including methane every year. The development of new fossil fuel projects is completely at odds with the aim of the Paris Climate Agreement to limit global temperature rises to significantly below 2 degrees Celcius, aiming for 1.5 degrees.

Banks and other financial institutions should steer clear of financing this project as it has serious negative environmental and social impacts. Financing this large infrastructure for a LNG facility will also mean a disincentive to construct and invest in renewable energies.

Forced displacements Forced displacements have already taken place. People have lost both their homes, but also the areas they depend on for their livelihood. Information on what justifies their resettlement and what will happen to them in the short, medium or long term has not been given. Already, 556 families have been forcefully relocated, and 2,000 families will be moved in the near future. Fishing communities who have lived 50 meters from the sea for generations, have been moved 10 kilometers inland, and without fishing, have lost their means of income.

The method to determine compensatory land for farming families that have been moved was illogical. Anadarko measured the size of community members’ land by counting the number of palm trees on the plot, leading to people who have 10 hectares of land, receiving one hectare. Furthermore, this new land is far from the new houses they have been moved to.

The project has failed to carry out mandatory community consultations and to observe due process in pre-existing land rights expropriations and community prior and fair compensations, in breach of laws according to the Centro Terra Viva Mozambique. For more information on the displacement and resettlement of particular villages see here.

Militarisation Over the last two years, there has been a scourge of violent attacks on communities inhabiting the gas region. Since the attacks began there have been two cases in which a company was attacked. One in March 2020 and one in July 2020. As a response to the attack in March, during which one employee from a Gabriel Couto convoy was killed, the government has brought the military into the area, while gas companies have contracted several foreign private security companies. The region has thus become highly securitised, however local communities still report living under constant fear of mistreatment by the military and by private security actors rather than feeling protected from the attacks. They are afraid to walk the long distances to the new farmland they have been given for fear of both attacks and harrassment from the army. Many private security companies, including the Russian paramilitary organisation, the Wagner group, have been in Cabo Delgado recently.

Health implications It is also the gas industry that brought the deadly COVID-19 virus to the Cabo Delgado province of Mozambique. A foreign Total worker tested positive at the beginning of April. Thanks to the lack of vigilance on the part of Total, its LNG construction site is now the epicentre of Mozambique’s COVID-19 crisis, accounting for two thirds of Mozambique’s cases. Total’s infected employees are isolated on site, but cooks, cleaners, security guards and other staff are brought in from the surrounding villages daily to serve Total employees. While Total has started to test their employees, inadequate efforts have been made to test and protect the communities in the surrounding areas.

Journalists arrested and detained Many journalists working in Cabo Delgado, especially those in the gas region, have been arrested or detained without charge over the last two years, some for months. Journalist Ibrahimo Abu Mbaruco, has been missing since April 7. His last message was one informing his mother that the military had arrested him, and many presume he is dead. A vocal community member, Mr Selemane of Palma, disappeared on 20 May 2020, 24 hours after speaking out against the mistreatment and heavy-handed nature of the military in the area. He is still missing at the time of writing.

Impacts of project research The seismic research related to this project has already affected local communities. Several harpoon fishermen suffered hearing injuries from the seismic guns while fishing. Many fishermen were forced to suspend their fishing activities for extended periods of time. This negatively impacted the communities’ means of subsistence and, according to the local fishermen, they were not given any compensation.

Anadarko’s environmental impact assessment spells out a list of wide-ranging consequences: clearance of mangroves, introduction of invasive species from ballast shipping water, greenhouse gas and toxic sulfur dioxide emissions, soil erosion, and ecological losses to wetlands and the birds, reptiles and amphibians that inhabit them. Coastal seabeds would be dredged to create shipping lanes and a corridor for the 40 km-long pipeline, which scientists say could damage coral reef networks.

Impacts on climate The environmental impact assessment estimates the project's direct emissions at 12.9 million tons of CO2 per year from 2022 onwards. The proposed LNG facility will release a large amount of greenhouse gas emissions, especially methane. The assessment underestimates the impact of methane that will be released during the extraction, processing and transportation of the natural gas off the coast of Mozambique. Methane is 87 times as potent as CO2 over 20 years according to a recent IPCC report. When this is taken in consideration direct emissions are closer to 44.9 million tons.

Impacts on biodiversity The project puts unique ecosystems and endangered species at great risk of complete destruction. The 3,600 hectares project would be located on the northern coast of Mozambique, where mangrove forests, coral reefs and seagrass beds are important for biodiversity but remain very vulnerable habitats. The project environmental impact statement also indicates that the nearshore and offshore areas include a number of species, such as sei whales, Indian yellow nosed albatross, leatherback, and hawksbill turtles, that are considered imperiled by the International Union for Conservation of Nature.

The project also threatens the Quirimbas National Park, located in the same province (Cabo Delgado) as the project area. Quirimbas was recently designated a UNESCO Biosphere Reserve, and consists of 11 islands, a combination of marine parks and a freshwater system including the Montepuez river and Lake Bilibiza, a bird sanctuary. The islands are home to thousands of species of flora, hundreds of bird species, a variety of reptiles, and nearly fifty species of land mammals including elephants, lions, buffalos, and leopards, while their waters are habitat for eight species of marine mammals.

Impacts of project research The seismic survey (ordered by Anadarko) has been criticized by environmental organisations for its damaging effects on marine animals and financial losses of local fishermen. Many issues have already been reported including as the death of large numbers of shallow-water bottom-feeding sea-grass fish, shellfish and turtles.

French oil major Total has signed a security pact with the Mozambique government to protect a $20 billion natural gas (LNG) project being developed in the southern African country, the company said on Monday. According to Ernesto Elias Tonela, minister of mineral resources and energy, the pact "bolsters security measures and endeavours to create a safe operating environment for partners like Total which enables their ongoing investment in Mozambican industry.”

Belgium’s Besix Group, in partnership with Portugal’s Mota-Engil SA, will start constructing the marine facilities for the Mozambique LNG gas development project this year, including one of the world’s longest jetty structures

The Mozambique LNG project will receive commitments from a group of 20 banks for about $15 billion of financing at a signing scheduled in June. The group of about 20 banks involved in the lending includes Rand Merchant Bank, Standard Bank Group Ltd. and Societe Generale SA, which is acting as the financial adviser.

Total has closed the acquisition of Anadarko’s 26.5% operated interest in the Mozambique LNG project for a purchase price of $ 3.9 billion. This closing comes after Total reached a binding agreement with Occidental on May 3, 2019, to acquire Anadarko’s assets in Africa (Mozambique, Algeria, Ghana and South Africa) and signed the subsequent Purchase and Sale Agreement on August 3, 2019 (worldoil.com).

The project is expected to cost USD 23 billion, financed on a debt-equity ratio of 75:25 with the debt portion to be funded via project finance (according to Anadarko's 2017 annual report). Sociéte Générale is the financial advisor on the project.

Anadarko announced that a final investment decision (FID) on the project had been reached on June 19, 2019.

In May 2020, after taking over Anadarko's share in Mozambique LNG Total announced it had secured USD 15 billion in financing.

Mozambique LNG is a joint venture of seven companies, as listed below.

As HSBC prepares for its AGM on 28 May, new research reveals that a selection of HSBC fossil fuel financial transactions over the last five years will emit 523 million tonnes of CO2 every year for decades to come
2021-05-27 | Market Forces
blog
external news
our news

Hundreds protest against TOTAL across Africa

Mozambique LNG project delayed by 'at least a year' due to security issues: Total

Mozambican journalists’ lives are on the line in Cabo Delgado

To counter violent extremism in places such as Mozambique’s Cabo Delgado properly, it’s necessary to understand the root causes of such conflicts and how mining operations can worsen them
2020-10-29 | Business Live
blog
external news
our news

Mozambique: LNG Terminal Will Be Built in Matola

Anadarko signs on buyers for $20B Mozambique LNG project

Gas in Mozambique: A windfall for the industry, a curse for the country

The impacts of the LNG industry in Cabo Delgado, Mozambique

Report On the Ground in Cabo Delgado May 2020 from JA!

Report from the Field: Perspectives and Experiences of Mozambican Communities and Civil Society on Liquefied Natural Gas Exploitation

Action website from JA! (Friends of the Earth Mozambique)

Anadarko signed the exploration contract with the government of Mozambique in 2007. Following several years of exploration, in 2012 a major natural gas discovery was made in Area 1 of the Rovuma basin offshore North Mozambique. In the same year Anadarko and Eni reached an Agreement for the coordinated development of Area 1 and Area 4.

Several purchase agreements for the gas extracted from Area 1 have already been signed. In 2017, the Thai state-owned PTT group, formerly known as the Petroleum Authority of Thailand, signed an agreement to buy 2.6 million tonnes of gas per year. In 2018, Électricité de France signed an agreement with Mozambique LNG, as did Tokyo Gas Co and Centrica LNG Co, a co-purchase also for 2.6 million tonnes of gas a year.