Home › News
Intesa Sanpaolo’s new board of directors brings in fossil fuels and agribusiness
News highlights the urgent need to close the revolving door between environmentally destructive industries and finance
By: ReCommon
2022-04-12
Italy
Share this page: 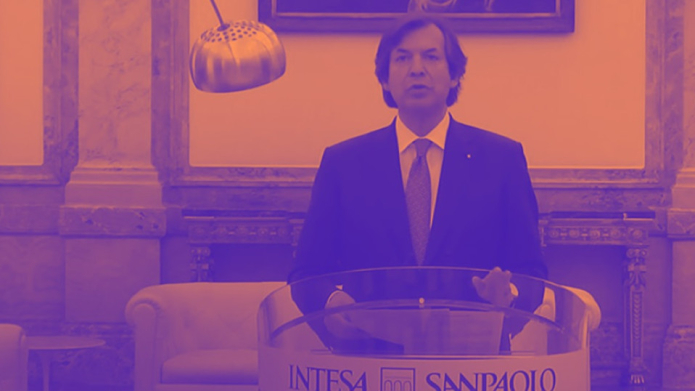 A few days ago, the main shareholders of Intesa Sanpaolo presented the first list of candidates for the Board of Directors and the Management Control Committee, which will be called to lead the group for the next three years. Between past and current ties, the list would strengthen the presence of the fossil fuels industry – and not only that – in the board of the largest Italian banking group.

The season of the shareholders’ meetings (AGMs) is getting into full swing and, as always, the fervor revolves around two topics: the renewal of the Board of Directors as well as the dividend paid to the shareholders. In short, these meetings represent well the abysmal distance between financial and industrial groups and people’s needs, these latter finding no space other than to be subjected to decisions taken elsewhere. What’s more, 2022 is the third year in which shareholder meetings are inexplicably held behind closed doors: among the measures taken in 2020 to combat the pandemic, now that even the Italian state of emergency has been removed it seems nothing more than a way of silencing critical shareholders.

These shareholders, who signed a shareholders’ agreement on December 21, 2021 in view of the AGM, first of all ask for the reappointment of Gian Maria Gros-Pietro as Chairman, Paolo Andrea Colombo as Deputy Chairman and Carlo Messina as Chief Executive Officer.

They then propose a varied list of old candidates and ‘new’ faces, which includes, among others, Luciano Nebbia, Paola Tagliavini and Liana Logiurato.

According to an April 2021 DeSmog investigation, to which ReCommon also contributed, more than 1/3 of Intesa Sanpaolo’s current board has ties to polluting companies and organizations. Italy’s largest bank is in good company, since 65% of the members of the Boards of the 39 banks analyzed have past or current ties with companies operating in polluting industries. A systemic conflict of interest that is all too often overlooked, since global finance is in the spotlight for loans and investments in the fossil industry, and therefore co-responsible for the ongoing climate crisis.

With the proposed candidates for the next Board, the weight of these ties can increase.

If Carlo Messina has a strictly financial profile, the same cannot be said of Gian Maria Gros-Pietro and Paolo Andrea Colombo. The former was President of Eni from 1999 to 2002, appointed with the aim of leading the company in the era of gas liberalization. He might be considered one of the architects of the company as we know it today, with his relevant specific weight in the Italian and international gas market, as well as in Italy’s foreign policy choices. Until 2019, Gros-Pietro was also a member of the Board of Directors of Edison – now part of the group Électricité de France – a company promoting the EastMed gas pipeline, designated as ‘Project of Common Interest’ by the European Commission in 2013. If realized, EastMed will only fuel new gas explorations and production in the eastern Mediterranean, a stretch of sea that is already heavily militarized and where the governments of Turkey, Greece, Cyprus, and Israel are on edge. Colombo’s ‘fossil record’ is no less: former member of the Board of Directors of Eni, then Chairman of Enel (2011-2014) and, finally, Chairman of Saipem (2015-2018).

In Saipem’s quota we also find the new entryPaola Tagliavini, who is also part of the Board of Directors of Eurizon, Intesa Sanpaolo’s asset manager. In these years Saipem has been the ‘arm’ of Italian fossil interests, contributing to the construction of infrastructures for new projects of exploration, production and transportation of hydrocarbons. Among these we can mention the Zohr field, off the Egyptian coast, owned by Eni (50%) and Rosneft (30%); the Mozambique LNG gas mega-project, led by Total, which contributes to the socio-political instability of the Cabo Delgado region, with all the induced effects of armed clashes and violence suffered by the civilian population, forced to flee; the Arctic LNG-2 project, in an ecosystem as fragile as the Russian Arctic, in these days at the center of a general flight from financiers (including Intesa Sanpaolo itself) and investors, for fear of the consequences of the sanctions imposed on the Russian Federation following the invasion of Ukraine; finally, there is the construction of the Kabaale refinery, in Uganda, from where the EACOP heated oil pipeline will start: if built, with its 1.443 km would be the longest in the world.

A few days ago, Saipem benefited from an important rescue plan, including a liquidity line of 855 million euros and a further loan of equivalent amount, in which – among others – Intesa Sanpaolo participated. The second loan will be guaranteed by SACE, Italy’s export credity agency. This means that, in the light of Saipem’s uncertain future, if something gos wrong the bank loan will be repaid with public money. This sends the message that, while an increasingly large portion of Italian families struggle to pay their energy bills, there are finances to help those same players who have contributed to Italy’s dependence on gas.

Among the possible new faces on Intesas next Board is Liana Logiurato, who was in force of agribusiness giant Syngenta between 2010 and 2018 in the role of Global Head of Mergers and Acquisitions. Syngenta is a leader in the GMO and pesticide industry and was acquired in 2017 by ChemChina (China National Chemical Corporation), one of China’s largest public companies operating in the chemical industry. The company is currently in the eye of the storm due to the recent “Paraquat Papers” investigation, published by Public Eye and Unearthed, the investigative journalism team created by Greenpeace UK. Researchers allege that, since 1990, Syngenta has used manipulated data to keep its herbicide Paraquat on the market, especially in Latin America, causing thousands of deaths from respiratory complications.

Among the current members confirmed we find Luciano Nebbia, member of the Board of Directors of Equiter, investor and advisor in the infrastructure sector, with a strong interest in the gas business. In fact, among Equiter’s shareholdings stands out the one in Iren, in the front row in the race for new regasification plants in Italy, with the aim of transforming liquefied natural gas coming from other countries, first of all Qatar and the United States, with the aim to break the dependence on Russian gas and switching to dependence on other suppliers.

Intesa Sanpaolo’s upcoming Board of Directors certainly seems well suited to the implementation of the 2022-2025 Business Plan, with the goal of achieving a net profit of 6.5 billion euros at the end of the three-year period. However, in light of the future composition of the main governance bodies, it is fair to wonder what will be sacrificed on the altar of profits. It is time for the revolving doors between the most impactful industries and finance to close for good. Otherwise, any promise of sustainability and ‘net-zero’ will be just another coat of green on top of a dirty business.