Home › News
Revealed: HSBC’s dirtiest deals will emit more pollution than Brazil or Canada
As HSBC prepares for its AGM on 28 May, new research reveals that a selection of HSBC fossil fuel financial transactions over the last five years will emit 523 million tonnes of CO2 every year for decades to come
By: Market Forces
2021-05-27 Contact: 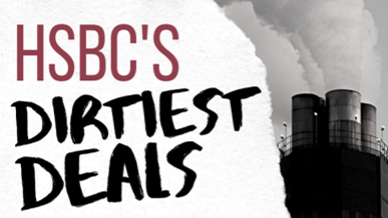 As HSBC prepares for its AGM on 28 May, new research reveals that a selection of HSBC fossil fuel financial transactions over the last five years will emit 523 million tonnes of CO2 every year for decades to come - more than the entire annual emissions of either Canada or Brazil, or nearly one and a half times the annual CO2 emissions of the UK.

The report, HSBC’s Dirtiest Deals, explores a small selection of HSBC’s most controversial financing decisions across four continents, telling the human stories behind the numbers. It includes financing for Saudi Aramco, the world’s single most polluting company, a coal plant in Indonesia that is the region’s largest source of toxic waste, and a gigantic oil field in Kazakhstan that emits a toxic gas that can kill in minutes and corrode steel.

All of these deals are permissible under HSBC’s current and planned climate policies, showing how weak the bank’s commitment to climate action is.

The report demonstrates how HSBC’s funding of fossil fuels, across many different geographies, makes a mockery of the bank’s claim to support the Paris Agreement. The report also shows that many of these projects - such as the Tengiz oil field in Kazakhstan - can only succeed if the Paris Agreement fails. This means that HSBC is banking on the Paris Agreement’s failure, locking the world into climate chaos.

In addition to the huge scale of the CO2 emissions, the deals are also causing direct human suffering in their immediate vicinity. In Mozambique, a HSBC-funded gas project exacerbates an Islamic insurgency that has seen unimaginable brutality and left thousands dead. In North America, HSBC’s funding for pipeline companies helps run the risk of poisoning lands held sacred by indigenous communities and enables brutal repression of protesters and troubling accounts of sexual assault at oil worker ‘man camps.’

Adam McGibbon, UK Campaign Lead with Market Forces, said: "HSBC says it’s a leader on climate change, but these findings show it’s a leader in human suffering. The bank’s tinkering around the margins with its climate policy won’t do. HSBC’s current policies will still allow them to fund this huge level of climate destruction and human suffering well into the future. No more excuses: The bank must set out its plan to end all its support for fossil fuels."

Tara Houska, a North American indigenous activist fighting the HSBC-funded Line 3 pipeline in Minnesota, said: "The land cries out for empathy, the people cry out for justice and both are met with silence. The tar sands industry is a tribute to human egoism and short-sighted benefit as the arboreal forest, the water, a multitude of ecosystems, and Black and Indigenous communities are sacrificed on the pyre of profiteering. As I see man camps appearing all over northern Minnesota to build Enbridge’s Line 3 tar sands pipeline, I call on the financiers to end their relationships with those who harm our people and land without a second thought. I call for action, not more empty words and promises."