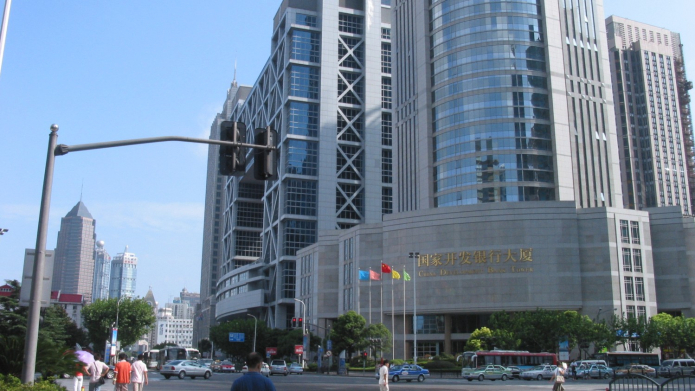 China Development Bank (CDB), established in 1994, is the world's largest development finance institution. The bank was originally established as a policy bank to finance the government's large-scale development projects. It is under the direct jurisdiction of the State Council or the People's Central Government. In December 2008 CDB became a commercial bank, however, its sole shareholders were China's Ministry of Finance and the Central Huijin Investment Corp., both departments within the Chinese government. After the restructuring, CDB retained all of the assets, liabilities and business of the policy bank, including RMB 300 billion in registered capital. China Development Bank provides financing for national projects such as infrastructure, basic industries, energy and transportation.

China Development Bank has been linked to the following "Dodgy Deals", e.g. as a current or past financier or through an expression of interest. Find out more about dodgy deals here. See the project or company profile for more details on the nature of the bank's link to the Dodgy Deal.

China Development Bank could be a climate bank

China-backed Sumatran dam threatens the rarest ape in the world

Development or destruction? An inside look at APP’s mega paper mill

Production is ramping up at Asia Pulp and Paper’s massive new pulp mill in Indonesia. Eco-Business takes a close look at what the mill means for the company, Indonesia’s forest and people.
2017-11-14 | Eco-Business
blog
external news
our news

Financiers of pulp and paper industry projects will cause environmental and social harm, says new report

How China became the global threat everyone saw coming

Call for banks to divest from APRIL

Chinese banks need to catch up on environmental policies

International banks must take responsibility in advocating for better standards
2007-05-09 | San Fransisco, Utrecht | Friends of the Earth US

Who is who in the Chinese lending institutional landscape

The Green Evolution: Environmental Policies and Practice in the Chinese Banking Sector

新的供资方与环境 - New Financiers and the Environment

China Development Bank has committed itself to the following voluntary standards:

China Development does not have publicly available investment policies, nor does it have a publicly available web page on corporate social responsibility. Below here are statements from the bank regarding sustainability from each year's CSR report.

2018 ''Driven by its mission of supporting national development and delivering a better life for the people, CDB taps into its potential in development finance; upholds a set of core values including responsibility, innovation, green growth, prudence and win-win development; and strives to become a world-leading DFI. Guided by national development strategies, we draw on the state’s credit support, follow market principles, and ensure principal safety and modest returns. Our medium- and long-term investment and financing play an important role in stabilizing growth and transforming the economic structure, achieving state development targets, improving efficient allocation of social resources, mitigating cyclical effects, and beefing up the priority and vulnerable links in development. We achieve our own quality growth by facilitating national strategies, making a positive difference in the sustainable development of the economy, society, and environment.''

2017 "For the purpose of helping drive the sustainable economic, social and environmental economy in China and around the world, CDB as China's leading DFI, is committed to strenghtening national competetiveness and improving people's livelihoods, dedicated to the core values of responsibility, innovation, green growth, prudence, and win-win development, and engaged in sustainable development activities adapted to the Chinese environment, in line with international standards."

2014 "The CDB continued its commitment to strategic planning in support of national key industries and major strategic initiatives. The bank increased support for clean energy projects including hydropower, wind power, nuclear power and photovoltaic power, with an aim of balancing the country's energy structure. Further, the CDB continued to implement its green credit lending practices while trying to develop market-oriented corporate entities, especially in areas of air pollution treatment, the recycling industry, sewage treatment and clean/renewable energy. These efforts were pursued through a variety of means, including franchising, government investment and subsidy and energy performance contracting."

2011 "CDB held the second Social Responsibility and Sustainable Finance Workshop in Germany's Frankfurt University. Twenty-six people from the middle and executive management of the CDB headquarters and branches exchanged views with the  experts from more than 20 globally leading institutions on the management of environmental and social risks, and obtained an in-depth understanding of social responsibility and sustainable finance.The bank also signed a framework financing agreement with Invest Sweden and China Energy Conservation and Environmental Protection Group, as well as an agreement of intent with Industrifonden, the national industrial fund of Sweden, to promote and finance the development of clean energy projects of Swedish small and mediumsized enterprises.CDB participated in the formulation of the Green Credit Policy promulgated by CBRC, mapped out its 2011 working plan on loans for environmental protection, energy conservation and emission reduction, released the document specifying the indicators for environmental impact assessment for loans, introduced the environmental veto power into its credit and lending decisions and ensured all loan projects having passed the environmental impact assessments. The bank has issued loans of 228.1 billion yuan in support of energy-conservation, emission-reduction and  environment-protection, and made concrete efforts to increase the world's resilience against climate change for the good of the people."

2010 "Oriented toward sustainable financing, the bank strengthened environmental and social risk management and vigorously expanded the green financial services to support environmental protection and the combat against climate change. CDB strictly implemented its green loan policies, carefully chose lending targets and effectively prevented environmental risks. In 2010, CDB formulated the Guiding Opinions on Financial Support for Energy Conservation and Emission reduction and other instruments, and made an aggregate loan of CNY 232 billion for energy saving and emission-reduction, overshooting the year’s CNY 140 billion target."

2009 "CDB has wielded its special financial leverages in the combat against climate change by supporting an all-round improvement in major river valleys, cities and the rural areas, technical upgrading for energy and resource conservation, as well as green and low-carbon economy. A total of RMB 139 billion was loaned to these fields, up 40.7% from 2008 and in fulfillment of its commitment a year earlier. CDB continued to reduce its carbon footprints by advancing green office and green procurement. In 2009, CDB signed a new Cooperation Agreement on Development Finance with the Ministry of Environmental Protection, in which the bank committed itself to extending a credit line of RMB 100 billion between 2009 and 2015 to support major environmental protection projects."