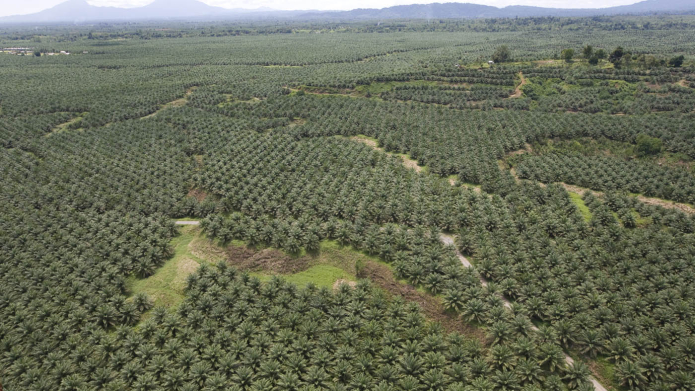 Palm oil production has exploded in the past two decades to become the world's most widely traded vegetable oil. Current production of more than 60 million tons is projected to double again in the next decade. As the palm oil tree only grows in the tropics, nearly 90% of global production comes from Indonesia and Malaysia. Palm oil plantations globally now cover around 15 million hectares and growing. Forest destruction for palm oil expansion is spreading quickly in SE Asia and to other rainforest regions in Central Africa and Latin America.

Biodiversity
Indonesia’s rainforests are one of earth’s most biologically and culturally rich landscapes. With just 1 percent of the Earth’s land area, Indonesia’s rainforests contain 10% of the world’s known plants, 12% of mammals and 17% of all known bird species. As recently as the 1960s, about 80% of Indonesia was forested. Indonesia now has one of the highest levels of deforestation in the world, with just under half of the country’s original forest cover remaining.

The rainforests of Borneo and Sumatra are the last stand for one of humankind’s closest relatives, the orangutan. Between 2004-08, the Critically Endangered Sumatran orangutan population fell by 14% to 6,600, largely due to loss of habitat for palm oil expansion. The Critically Endangered Sumatran tiger and Sumatran rhinoceros, both with populations of only hundreds left in the wild, are also urgently threatened by palm oil expansion. Recent studies in Borneo show only 12% of remaining habitat for the Endangered Borneo Orangutan are in protected areas, and palm oil expansion is the largest threat across their range.

Social impacts
Corporate land grabbing of Indigenous and community forests for palm oil plantations is responsible for serious human rights abuses and persistent conflicts between companies and rural communities. In Indonesia there are over 500 different language groups and between 60 and 110 million Indigenous peoples, many of whom depend on standing natural forests for their livelihoods. The Indonesian palm oil monitoring group SawitWatch has identified 663 ongoing land disputes between palm oil companies and rural communities. Private armies and paramilitaries have been deployed to take and maintain control over lands on behalf of palm oil companies, resulting in displacement, incarcerations, injuries and deaths. The palm oil sector employees several million persons, but labor conditions are often poor. Industrial palm oil plantations are reported to rely on the use of forced and child labor, both of which are believed to be widespread in the sector.

Climate change
Peatlands are carbon-rich wet ecosystems that have sequestered billions of tons of carbon through thousands of years of accumulating leaf litter and organic material. Indonesia has 65% of the world’s tropical peatlands, and Malaysia an additional 10%, with combined carbon stocks of 60 billion tons of carbon, which is equivalent to nearly 7 years of global fossil fuel emissions. The conversion of peatland to palm oil plantations is already contributing hundreds of millions of tons of CO2 to the atmosphere each year, and expansion of palm oil plantations on peatlands is expected to double within a decade. This is having globally significant impacts on the climate, with emissions similar in scale to some of the world’s biggest coal and tar sands development projects. Indonesia is the world’s third largest emitter of greenhouse gases after the U.S. and China, with 85% of its emissions profile coming from rainforest and peatland destruction. Deforestation in Indonesia is responsible for some 5% of global greenhouse gas emissions, which is more than the combined emissions from all the millions of cars, trucks, trains, and buses in the U.S. each year combined.

The role of banks

In 2000, Greenpeace and Friends of the Earth launched a campaign in the Netherlands, holding banks responsible for the deforestation caused by the palm oil industry. Due to the campaign, the palm oil sector became the first one on which Dutch banks adopted sector policies.

Close the Gap
In 2010, BankTrack conducted a research project on the quality of bank policies relevant for palm oil. You can see the results of this report here.

The Chain: Malaysian BLD Tops List of Major Deforesters in 2018

Liberian communities harassed after calling on banks to halt $1.5 billion loan to Wilmar over landgrabbing concerns

The underbelly of the financial world

The challenges of growing oil palm on peatlands

Indonesia is rife with disputes between indigenous communities and plantation firms, but the problem remains poorly understood.
2016-12-20 | Mongabay
blog
external news
our news

Letter by investors to the RSPO

Republic of Congo to promote foreign investment in agriculture

McDonald's to address deforestation across all commodities it sources

Lives matter most around plantations

Why palm oil expanded, and what keeps it growing

(NOT) Doing Business in Nigeria

Deforestation, "development" connected to spread of Ebola in West Africa

Nigeria's oil palm development: The potential and the threat

Vandebeeck: Why Nigeria is preferred investment destination in Africa

This Indonesian palm oil company operates illegally and is involved in land grabbing.
2014-09-26 | Nijmegen | Friends of the Earth Europe and Banktrack
blog
external news
our news

Passive investing or active destruction: How robo-investing mows down forests for fun and profit

Response to Greenpeace’s Release on the Sustainable Palm Oil Manifesto

The broken promises of Wilmar and its financiers

The new “Food Estate Programs” announced for Indonesia will result in more hunger and threaten local people, regional forests and the global climate
2021-03-05 00:00:00 | WALHI and others
ngo documents

Letter to banks and investors on Indofood labor exploitation

Toward responsible and inclusive financing of the palm oil sector

WWF position on Deforestation-freeproduction and finance

The Peruvian government fails to define forests as forests, while palm oil expansion and the Malaysian influence threaten the Amazon
2015-04-09 00:00:00 | EIA
other documents

Responsible investments in agriculture, in practice : Results and conclusions from a case study review

The IISD Guide to Negotiating Investment Contracts for Farmland and Water

Box 7 of report "Consumer Goods and Deforestation: An Analysis of the Extent and Nature of Illegality in Forest Conversion for Agriculture and Timber Plantations"
2014-09-14 00:00:00 | Forests Trends
ngo documents

How Investors Are Changing the Palm Oil Supply Chain

Statement on forestry and palm oil

The Jakarta Workshop CSO Statement on Palm Oil and Finance

Implication of Biofuels production on food security in Tanzania

Toolkit for Identification of High Conservation Values in Indonesia

WWF Guidelines for Investment in Operations that Impact Forests

The involvement of Dutch Banks in the Financing of Oil Palm plantation in Indonesia
2000-03-30 00:00:00 | AidEnvironment for Greenpeace
csr policies

Round Table on Sustainable Palm Oil - Revised Principles and Criteria

Round Table on Sustainable Palm Oil - Revised Principles and Criteria

Eyes on the Forest - map of Sumatra

Foe US on forests

In your Palm - action page of RAN

Indonesia's deforestation is a disaster for the planet

audio slide show on impact of plantations on forests
http://www.theguardian.com/environment/audioslideshow/2014/apr/24/indonesia-deforestation-wildlife-paul-hilton-audio-slideshow

Round Table on Sustainable Palm Oil