This profile is no longer actively maintained, with the information now possibly out of date
Send feedback on this profile
Download as PDF Created before Nov 2016
Last update: 2020-10-08 18:50:53 Share this page: 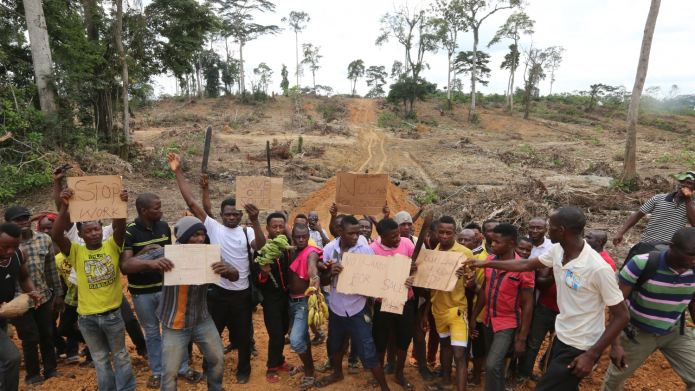 Wilmar International, founded in 1991, is one of the world's largest agribusinesses and the world's largest palm oil trader. Wilmar was established by Kuok Khoon Hong of Malaysia and Martua Sitorus of Indonesia. In June 2007, Wilmar International completed a major merger with the palm oil and edible oil operations of the Kuok Group. Wilmar is involved in a wide range of operations, including oil palm cultivation, oilseed crushing, edible oils refining, sugar milling and refining, manufacturing of consumer products, specialty fats, oleochemicals, biodiesel and fertilisers as well as flour and rice milling.

Wilmar International announces its no deforestation, no peat, no exploitation policy

The world's largest palm oil trader, Wilmar International (via its subsidiaries), is involved in deforestation and violating rights of communities.

Impacts on labour In a 2016 research about working condition in the palm oil sector in Indonesia, Amnesty International investigated two plantations owned by subsidiaries of Wilmar (PT Perkebunan Milano and PT Daya Labuhan Indah) and three suppliers of Wilmar (PT Sarana Prima Multi Niaga, PT Hamparan Masawit Bangun Persada and PT Abdi Budi Mulia). The report states that workers have to meet (unrealistic) targets, otherwise their salary will be reduced and can end up below the minimum wage. The minimum wage in itself is not sufficient to meet living costs since the food at the remote plantations can be 40% - 50% higher in comparison to towns. The situation forces workers (at the investigated plantations) to get help from their spouses, children or others with their tasks at the plantation which results in child labour.

Affected communities In October 2014, the Nagari Kapa community, an indigenous community from West Sumatra, filed a formal complaint with the RSPO. The community accused Wilmar’s fully owned subsidiary Permata Hijau Pasaman I (PT PHP1) of taking over customary lands without Free Prior and Informed Consent of the Kapa people for the establishment of oil palm plantations. While the complaint was under investigation, PT PHP1 continued to take over customary lands. In addition, community leaders were harassed and questioned about their involvement in the complaint with the RSPO by local police. In February 2017 the RSPO decided that Wilmar indeed had acted in violation of the RSPO sustainability standard.

Wilmar's fully owned subsidiary PT Bumi Sawit Kencana (PT BSK) is involved in a land dispute in the Central Kalimantan Province in Indonesia. In June 2016 communities filed an official complaint with the RSPO for failure to pay compensation for the loss of land. The land dispute with citizens and PT BSK has caused several violent incidents, even resulting in injuries and the death of two villagers.

In March 2018 Wilmar doubled its stake in the Ivorian firm SIFCA to 27.06%. SIFCA is running the Maryland Oil Palm Plantation. According to affected communities the project has caused desecration of sacred sites, destruction of crops and water resources and loss of land and livelihoods. In addition, community members say that state security forces were used by the plantation to silence dissents.

Amnesty International has found discriminatory patterns at Wilmar’s subsidiaries PT Perkebunan Milano and PT Daya Labuhan Indah and its suppliers PT Hamparan Masawit Bangun Persada and PT Abdi Budi Mulia. With the exception of some women working in office administration, no women are giving permanent employment even though having worked for the companies for years, denying them access to benefits such as health insurance and pensions.

Women are also often responsible for planting and maintaining the plants which requires them to use fertilizers and chemicals with the risk of health issues. When the rain washes away the used chemicals, workers have reported that they are payed only half a day or not at all because they have not met targets.

Deforestation In December 2013 Wilmar adopted it's  ‘no deforestation, no peat, no exploitation’ (NDPE) policy, that required its suppliers to immediately cease any development of forests, including HCV (High Conservation Value) and HCS (High Carbon Stock) lands, and peat of any depth. However, several reports of NGOs have shown that Wilmar's suppliers or subsidiaries continue to engage in deforestation including HCV and HCS lands after their policy.

In 2014 Greenomics found evidence that Kencana Agri, a company 20 percent owned by Wilmar, had engaged in deforestation in Sulawesi, Indonesia. Friends of the Earth Europe showed that Wilmar also continued to clear forest in the buffer zone of the Afi Wildlife Sanctuary in Nigeria, which contains HCV forest. In addition, the report showed that Wilmar continued to purchase oil palm from the Indonesian company Bumitama Agri, which illegally cleared forest in critical orangutan habitat.

Another report of Greenomics showed that in the first quarter of 2015, Wilmar was buying CPO produced by PT Austindo Nusantara Jaya (ANJT), a company that continues to extensively clear high carbon stock (HCS) forest in West Papua province to date. According to a Mongabay article, Wilmar stopped sourcing from ANJT in April 2015.

Rainforest Action Network found that between June 2016 and January 2017 324 hectares of forest were cleared in the Leuser Ecosystem (Sumatra, Indonesia) for an illegal plantation of PT Agra Bumi Niaga (ABN). The palm oil from this plantation was transported to a nearby processing mill owned by PT. KPJ, which in turn provides crude palm oil to Wilmar.  Nestle said to be 'very concerned' about the allegation and Wilmar said to have put the purchases from ABN on hold.

In June 2018 Greenpeace revealed that the company Gama Corp is run by senior Wilmar executives and members of their family. This means that Gama and Wilmar should be considered as one group according to RSPO rules and Indonesian Law. Gama has cleared an area of forest and peatlands twice the size of Paris in Papua New Guinea since Wilmar has announced its NDPE policy.

Jakarta, Indonesia – A new Greenpeace International investigation has revealed that Wilmar International, the world’s largest palm oil trader, is still linked to forest destruction for palm oil almost five years after committing to end deforestation. An area twice the size of Paris has been destroyed by Gama, a palm oil business run by senior Wilmar executives and members of their family. Analysis of trade data shows that Wilmar continues to trade palm oil from Gama to many of the world’s biggest brands, despite being aware that Gama was violating Wilmar’s NDPE policy by clearing rainforest (Greenpeace, June 2018).

Wilmar International announces its no deforestation, no peat, no exploitation policy

On December 5 2013 Wilmar International announced its No Deforestation, No Peat, No Exploitation Policy, recognizing the many negative impacts on people and environment of plantation development.

Between 2014 and 2018 several financial institutions have provided finance for Wilmar International totalling USD 2.76 billion (Forests and Finance Database). This consists of credit facilities, corporate loans and underwriting services. See below for a specified overview.

Note: In 2012 Norway's Government Pension Fund Global divested from Wilmar, after it revised its investment guidelines to include deforestation as a portfolio risk.

Liberian communities harassed after calling on banks to halt $1.5 billion loan to Wilmar over landgrabbing concerns

The leader of the Kapa community said he hoped the palm oil giant would ‘quickly restore our right to the lands that it took without our consent.’
2017-02-16 | Mongabay
blog
external news
our news

Multi-billion euro investments out of control: How banks continue to finance violations of human rights and environmental norms

For the fifth consecutive year Facing Finance reports on violations of environmental and social norms and standards by multinational corporations, as documented by international NGOs.
2017-02-09 | Hamburg/Berlin | Facing Finance
blog
external news
our news

Petition - Moratorium for the Leuser Ecosystem

Blockade at Wilmar mill could erupt into full-blown strike

Give us back our land: Ugandan oil palm project taken to court over land-grab claims

Nigeria's oil palm development: The potential and the threat

The broken promises of Wilmar and its financiers

'Conflict or Consent?' Chapter 4: PT Permata Hijau Pasaman I and the Kapa and Sasak peoples of Pasaman Barat, West Sumatra

The Need for Free, Prior and Informed Consent:

Wilmar Continuing to Exploit and deforest

The Last Place on Earth

The financing of Wilmar International

Golden Agri - Resources, the biggest buyer of CPO produced by a company that is relentlessly clearing HCS forests in Papua

Letter from FoE US to banks on - annex 1, petition Wilmar and PT SIL (english)

Letter from FoE US to banks on - annex 2, petition Wilmar and PT SIL (bahasa)

As a strategic shareholder, is this in line with Wilmar’s No Deforestation Policy?

Continuing to Exploit and Deforest

'Conflict or Consent?' Chapter 4: PT Permata Hijau Pasaman I and the Kapa and Sasak peoples of Pasaman Barat, West Sumatra

Wilmar International and its financiers

The financing of Wilmar International

Buyers and financiers of the Wilmar Group

Photos of Land grabbing in Uganda by Wilmar

Wilmar on the Environmental Justice Atlas

Mapping of deforestation and plantations