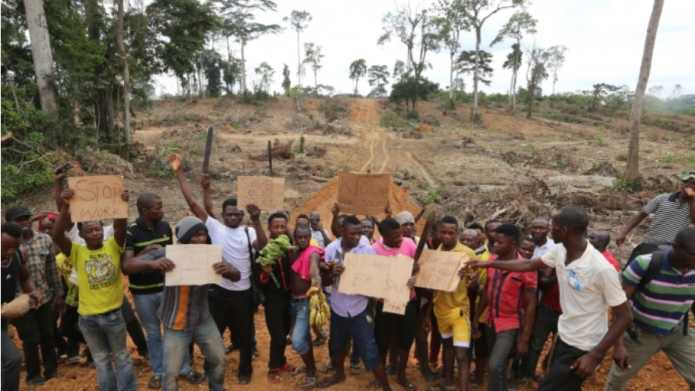 The complainants demand that ING divest from these palm oil companies and the industrial palm oil sector as a whole. In addition, the organizations want the Dutch authorities to acknowledge that whilst the bank was aware of the harms, it did not act properly to address them and therefore contributed to the harms. They also call on the Dutch government to implement binding regulations for the financial sector. Dutch citizens are requested to support the campaign and reconsider banking with ING because of the environmental harm and abuse of human rights.

"We have been informing ING of the abuses in the industrial palm oil sector since the beginning of this century," said Evert Hassink, policy officer at Milieudefensie. "But ING continued to finance these palm oil companies. The bank wants to engage with these companies and in this way seduce them into more sustainable choices. But after all these years it has become clear that this dialogue has yielded nothing substantial," said Hassink.

Oslan Purba, head of programmes at WALHI, says: “The industrial palm oil sector has been one of the main drivers of deforestation in Indonesia. The palm oil sector is using influence over the Indonesian government to protect their interests. Every Euro European financiers have been putting into rogue companies meant further expansion of plantations onto people’s lands and into forests. Illegalities in the palm oil sector undermine the impact of the Indonesian moratorium on the expansion of industrial activities into primary forests and peat areas.”

James Otto, programme manager at SDI, says that “Liberia is at the frontier of industrial palm oil developments in West Africa and our people are suffering from human rights violations. Workers’ rights and child labor are two of our concerns, and violations are systemic in the exploitative model of industrial palm oil production. The largest remaining forest areas of the Upper Guinea Forest face depletion if these companies continue to do business as usual.”

Misconduct
The complaint is supported by evidence on misconduct by three customers of ING:

Consequences for ING
If the Dutch contact point upholds the allegations, this can have consequences for ING. It can be excluded from trade missions, subsidies and government support abroad. More importantly, it sets a precedent for other banks on how to comply with the OECD Guidelines and increases the chances that communities get redress. The OECD Guidelines for Multinational Enterprises clarify what governments expect from companies in the field of corporate social responsibility. They indicate how companies should deal with human rights, child labor, the environment and corruption.

Guidelines
The French and Belgium contact points for the OECD Guidelines have already established that ING customer, Socfin, did not comply with the Guidelines. Several other financial institutions have terminated their relationships with controversial palm oil companies, including the Noble Group. The Norwegian Government Pension Fund, for example, stopped financing no fewer than 33 different palm oil companies. In the Netherlands insurance company Aegon divested completely from the palm oil sector. Various other civil society organisations, including ReAct, Brot für alle, FIAN Belgium, CNCD-11.11.11 and FERN, support the filing of this complaint against ING by the Friends of the Earth groups.

Agriculture for Industrial Crops | Agriculture for Palm Oil | Biomass Electric Power Generation
There are no companies active for this item now.
on record