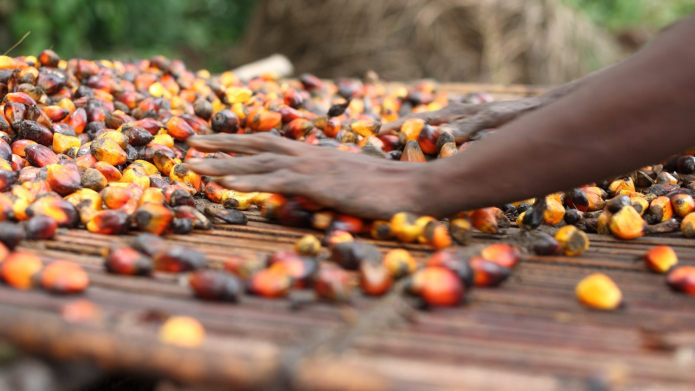 Commercial banks that were lining up to join a $1.5 billion syndicated loan for the palm oil giant Wilmar International are apparently reconsidering the deal due to concerns about land grabbing and other human rights abuses connected to the company’s investments in Liberia. Communities affected by the Maryland Oil Palm Plantation in southern Liberia have called on banks to refrain from joining the loan unless Wilmar commits to remedial action to address their grievances.

The plantation is operated by the Ivorian firm SIFCA, which Wilmar owns a significant stake in and advises on palm oil operations. Affected communities say the project has caused loss of land and livelihoods, desecration of sacred sites, and destruction of crops and water sources. The plantation has used state security forces to silence dissent, according to community members.

“Any loan to Wilmar must be conditioned on the remediation of harms and human rights abuses caused by Maryland Oil Palm Plantation to communities in Liberia and an immediate halt to the ongoing use of security personnel to harass and intimidate the local population,” said Francis Colee, Head of Programs at Green Advocates International, a Liberian civil society organization. “Failure to do so will expose Wilmar’s financiers to unacceptable human rights and reputational risks, leaving them with no choice but to stay away from this and future deals.”

Liberian civil society organizations and community leaders warned lenders about the human rights and environmental violations associated with the plantation in a June 8 letter. The signatories sent the letter after learning that Wilmar had tapped seven banks, including Roundtable on Sustainable Palm Oil member HSBC, to arrange the $1.5 billion revolving credit facility. The proceeds are for general corporate purposes, including funding the working capital requirements of Wilmar’s subsidiaries such as SIFCA.

In response to the community’s concerns, BNP Paribas informed Inclusive Development International and Green Advocates that Wilmar was conducting “an on-the-ground assessment” of the plantation. In reality, however, that assessment has appeared to be nothing more than an exercise in intimidation of the letter’s signatories. Local government officials have gone house to house asking the signatories to confirm whether they in fact signed the letter and why they did so. They have been accused of being anti-development and opposing the newly elected Liberian government. Some community members have reportedly been threatened, and Green Advocates has faced at least three security incidents.

“This is a classic a response from the government of Liberia and its transnational corporation partners operating in Liberia. We have seen this over and over. Community concerns and grievances characterized as anti- government, anti-development and anti-investment, said Alfred Brownell, Lead Campaigner and Legal Counsel.

“These attempts to harass and intimidate people raising legitimate human rights concerns are outrageous,” Pred said. “SIFCA and the plantation’s staff should know that the world’s largest banks are paying close attention to what is happening in Maryland County.”

In 2010, SIFCA received a concession to establish the 8,800-hectare project on a plantation that had fallen into disrepair during the Liberian civil war. SIFCA, which has roots in coffee and cocoa production, leaned heavily on Wilmar and another Singaporean palm oil giant, Olam, to get the plantation up and running. Wilmar and Olam each bought 13.53% stakes in SIFCA in 2007 through the holding company Nauvu.

In March of this year, Wilmar doubled down on its investment, buying out Olam’s shares for $194 million, giving it a 27.06% stake in SIFCA. When the plantation begins producing on a significant scale in the near future, Wilmar is expected to distribute the palm oil through its global supply chain.

The environmental, social and reputational risks of financing Wilmar are not limited to Liberia: