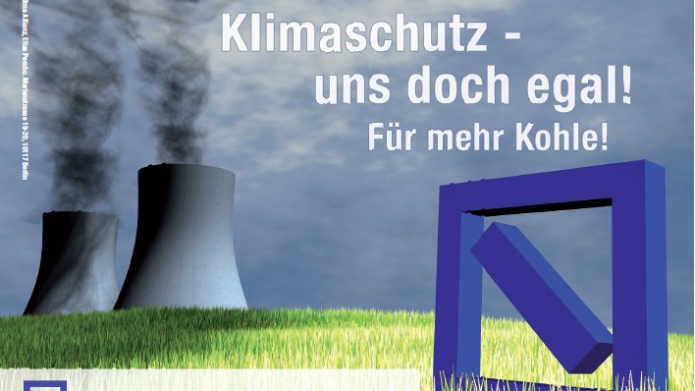 A broad coalition of environmental and human rights organisations is calling on the Deutsche Bank to finally start the much-needed cultural change towards sustainability.

This Thursday sees a large number of NGOs protesting in front of the Annual General Meeting of Deutsche Bank in Frankfurt against the bank's destructive business policy. They will present the International ethecon Black Planet Award. "This award goes to the two CEOs Fitschen and Jain as well as the major shareholders of Deutsche Bank, as they are in many ways involved in the destruction of our earth, turning it into a black planet ," says Axel Köhler Schnura from the Foundation ethecon.

"A bank that claims to act according to high environmental and social standards must not take advantage of massive climate damage, human rights violations and international arms deals," criticises Thomas Küchenmeister, managing director of Facing Finance.

The environmentalists especially point towards the financing of coal by Deutsche Bank. "Deutsche Bank likes to present itself as a climate protector and climate ambassador," says Heffa Schücking, director of the environmental organization Urgewald. "At the same time, it is one of the top financiers of the coal industry worldwide. Between 2005 and January 2014, it has helped large coal companies worldwide with more than 15 billion euros. They do not shy away from financing controversial companies such as Coal India, or Glencore, which cause massive environmental destruction and climate damage. This schizophrenia between aspiration and reality of Deutsche Bank must finally end. Deutsche Bank must stay away from destructive projects and companies," states Schücking .

Currently, Deutsche Bank is under pressure, as on the East Coast of Australia, a deep-sea port will be expanded to transport coal. This is only 50 kilometers from the Great Barrier Reef, the largest coral reef on Earth. The coal port expansion threatens the sensitive ecosystem. "What currently is planned at Abbot Point puts at risk the Great Barrier Reef and industries reliant on it remaining a healthy ecosystem," says Tony Brown, chair of the Whitsunday Charter Boat Industry Association. "Deutsche Bank should not consider supporting financially the expansion of the coal port with all its environmental problems. Therefore, I will call on Mr. Jain and Mr. Fitschen at the Annual Shareholder Meeting to not support such an environmental scandal and to exclude any financing for this project categorically. "

Large weapon manufacturers - producing nuclear weapons and drones - are still funded by the bank. Thus the bank benefits big time from the global trade in arms. Deutsche Bank business relationships to nuclear weapons manufacturers amounts to almost 3 billion euros. Through this the Bank supports maintaining, upgrading and development of weapons, the use of which is threatening our livelihood. The Bank apparently doesn't follow the global disarmament approach "Global Zero", which is supported by the German federal government.

The NGO coalition also opposes the provision of financial services for land grabs and human rights abuses of palm oil companies like Wilmar in Indonesia, Uganda, Nigeria and Liberia.

The continous involvement of the Bank in food speculation sparks criticism, too. According to the UN (FAO), food prices have risen to a record high last year. Development organizations and multilateral institutions like the World Bank believe that commodity futures of banks have enormous impact on the prices of food and can raise them. "Deutsche Bank is still one of the largest international food speculators," says David Hachfeld , food speculation expert at Oxfam. "While other banks have dropped this business, Deutsche Bank still offers its customers investment funds betting on rising prices of agricultural commodities. If prices explode, people in developing countries can no longer afford to buy food. Rather than stopping their risky transactions, Deutsche Bank plays a game with the public. Two years ago they announced a comprehensive analysis on food speculation, but to date the Bank hasn't published anything substantial."