This profile is no longer actively maintained, with the information now possibly out of date
Send feedback on this profile
Download as PDF By: BankTrack
Created before Nov 2016
Last update: 2016-10-19 02:14:59 Contact: 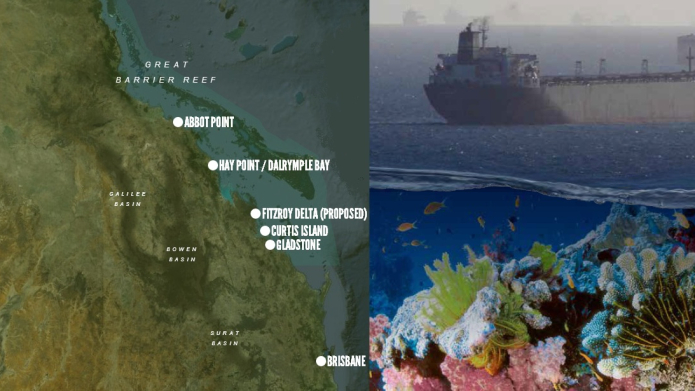 Australia is on the verge of an unprecedented coal boom. The epicentre of this expansion is the yet-to-be-developed Galilee Basin in Central Queensland. Galilee is the proposed site for a series of mega mines that will cause Australia's coal exports to more than double within a decade. The creation of mega mines in Central Queensland, the accompanying export infrastructure and increases in shipping traffic, as well as the burning of the coal they produce, place an incredible burden on Australia's Great Barrier Reef. Billions of dollars of investment has enabled a series of coal and gas projects to be built along the Great Barrier Reef coastline. While this industrialisation is already threatening the sustainability of the Reef, expansions of coal exports and new liquefied natural gas (LNG) processing plants would cause major environmental harm.

The project consists of:

Banks should immediately abandon harmful coal and gas export projects in the Great Barrier Reef. Furthermore, it is critical that the state and federal governments ensure major new infrastructure developments are not approved during the assessment period. Otherwise by the time the assessment is completed, massive damage to the reef will already be locked in.

Climate
Burning coal for energy is the single biggest fossil fuel contributor to climate change. The planned exponential increase in the volume of coal mined, exported and eventually burnt  would result in billions of tonnes of carbon pollution from the Galilee Basin over the coming decades.

Great Barrier Reef
Between the fossil fuel industry and its massive expansion plans is an Australian natural icon: the Great Barrier Reef. Coastal coal and gas projects are already threatening its World Heritage status, but a series of proposed new export terminals would lock in environmental disaster for the Reef. Climate change, ocean acidification, pollution and shipping are all damaging the health of the reef ecosystem. Directly contributing to and exacerbating these threats is reckless industrialisation, driven by the unprecedented expansion of Queensland's coal and gas industries.

Land use
Coastal habitats are a vital component of the Great Barrier Reef ecosystem. Beaches provide nesting grounds for turtles and seabirds. Mangroves are home to a diverse range of marine life, breeding grounds for fish and habitat for birds and land based animals. Seagrass meadows are the nurseries of juvenile fish, prawns, crayfish and crabs and the primary food source of dugongs and green turtles. Coastal development has a range of consequences for the Great Barrier Reef ecosystem. Massive swathes of wetlands and dune systems have already been lost. Those remaining are under sustained threat from industrial development including from infrastructure associated with the fossil fuel export boom. Water runs into the Great Barrier Reef from a total catchment of 424,000 kilometres. The low quality of this water, mainly resulting from excessive nutrient, sediment and pesticide runoff from agriculture, has deleterious effects on many marine organisms. Mining can also contribute to the problem as contaminated water from mine sites containing heavy metals, acid-leachate, salts and sediments is frequently released into the Great Barrier Reef catchment.

On and offshore
Development of the proposed coal terminals located in the Great Barrier Reef World Heritage Area will result in the destruction and disturbance of significant areas of Queensland coastline. On land, the development will result in coal terminals covering over 5,000 hectares: an area equivalent to over 2,500 times the size of the Melbourne Cricket Ground. This area is only a fraction of what will be disturbed by coal train yards, other associated infrastructure and coal wharfs. The development of most of the proposed new coal export terminals will require dredging to permit massive coal ships access to the loading wharfs. Dredging destroys the seabed and can resuspend contaminants into the water column, causing widespread impacts. For example, dredging at Hay Point in 2007 impacted corals 12 kilometres away.

Ultimately, climate change and ocean acidification pose the greatest threat to the reef. Coral is extremely sensitive to even short periods of increased sea temperatures, resulting in coral bleaching (death). Over the past two decades a number of major bleaching events have occurred, in two cases (1997/8 and 2002/3 approximately 50% of the reef was affected).

The negative impacts of shipping on the reef include collisions, groundings, introduction of invasive marine pests, oil and chemical spills, introduction of anti-fouling paints, waste disposal and anchor damage. Since 1985 an average of two major shipping incidents, such as collisions or groundings, have occurred in the Great Barrier Reef each year. The Great Barrier Reef provides AUD5.1 billion per year to the Australian economy and sustains 50,000 jobs. (source Greenpeace: Boom Goes the Reef Report).

Australian government approved a controversial port expansion to support mining projects and the dredging of 1.1 million cubic metres (2.4 million cubic feet) of spoil despite fears it threatens the Great Barrier Reef. The decision, creating a huge port capable of handling up to 120 million tonnes of coal each year, comes two months after the government green-lighted an Indian-backed plan to build one of the world's biggest mines in the same area of Queensland state (source: www.phys.org).

In response to the alarm over the industrialisation of the Great Barrier Reef, on February 18, 2012 the Queensland and Australian Governments announced a new strategic assessment aimed at protecting the unique environmental values of the World Heritage Area and the Great Barrier Reef coast. The 18 month assessment was expected to be the most comprehensive ever carried out in Australia. It was endorsed in August 2014.

The information above describes the institutions financing the following Queensland coal and gas export projects:

The "big four" Australian banks, ANZ, Commonwealth, NAB and Westpac, have played an integral role. Together they lended almost AU$4 billion to coal and gas projects in the Great Barrier Reef World Heritage Area since 2008. Since January 2008, over AU$17 billion has been lent to coal export ports and new LNG processing plants along the Great Barrier Reef coastline.

"Delusional': NSW report banks on rising coal output and royalties out to 2056

Australian coalmines are one of riskiest investments in the world – report

Commonwealth Bank under pressure to rule out Galilee coal support

Queensland's miners will need a miracle to profit from coal now

Victory for the climate and environment: French banks pledge not to finance mega coal projects in Australia's Galilee Basin

The court case that could choke mining in Australia

With Queensland election promises, and mining projects, it's wise to keep digging

Crunch time for coal frontiers as costs could scuttle

Is Deutsche Bank about to finance more reef destruction?

Queensland approves construction of one of world's biggest coal mines

India unlikely to be able to afford Australian coal

Press release – The beginning of the end of imported coal in India: report exposes economic flaws

Could bankers save the great barrier reef?

Climate Commission warns coal will be left in ground

Standard Chartered's involvement in the Carmichael coal mine would be 'non-standard' and 'unchartered', on the bank's own terms

The end of coal?

Save the reef petition

The reef is under threat from the reckless expansion of the coal industry. Yes! I want to keep our Barrier Reef Great. Sign the Petition
http://www.savethereef.org.au/