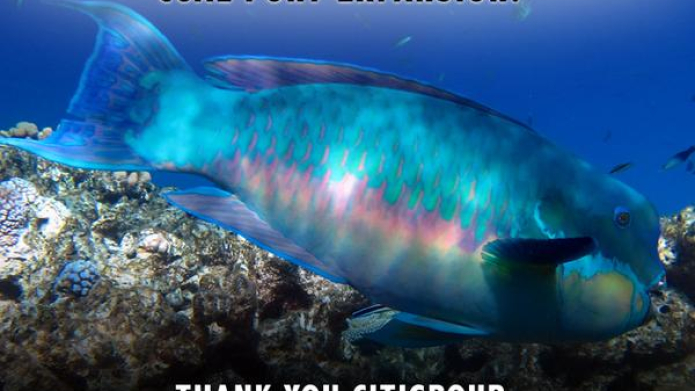 Rainforest Action Network commended the move by leading U.S. investment banks to rule out financing the Abbot Point coal export project in Queensland, Australia. Under pressure from RAN, Citigroup, Goldman Sachs, and JPMorgan Chase all issued written commitments-released publicly for the first time today-to not bankroll the controversial project, which would involve dredging part of the Great Barrier Reef.

"We're pleased to see some of the biggest banks on Wall Street reject this destructive project that presents a grave threat to the Great Barrier Reef and to the global climate," said RAN Climate and Energy Program Director Amanda Starbuck. "These banks have clearly taken a good look at the Abbot Point plan and decided that dredging a World Heritage Site to make way for coal ships is obviously a terrible idea."

The chilly reception to Abbot Point from U.S. banks follows five major European banks (Deutsche Bank, Royal Bank of Scotland, HSBC, Barclays, and Credit Agricole) publicly ruling out investment in Abbot Point earlier this year after months of campaigning from an international coalition. BlackRock has also warned investors to steer clear of the project. This new move by major U.S. banks signals that the Adani Group and GVK may be unsuccessful in their bid to secure an estimated $26.5 billion in external financing necessary for the planned expansion of coal export facilities and associated mine and rail infrastructure.

Rainforest Action Network is campaigning to stop Abbot Point due to concerns over how terminal construction and operation would impact the Great Barrier Reef; building the terminal would require dredging an ecologically sensitive area of the Great Barrier Reef World Heritage Area. Additionally, if Abbot Point moves forward it could unlock one of the world's largest untapped stores of carbon, the Galilee Basin, by providing critical export infrastructure. Nine new mega coal mines are currently planned for the Galilee Basin, five of which would be bigger than any coal mine currently operating in Australia. Galilee basin mines, if fully developed, would produce up to 330 million metric tons of coal per year for export, more than doubling Australia's exports. Australia is already the number two exporter of coal in the world.

"Stopping Abbot Point is a top priority for us, because this single project is the key to whether one of the largest stores of carbon on the planet, the Galilee Basin, stays in the ground where it belongs, or is sold on the global market and released into our atmosphere," said Starbuck.