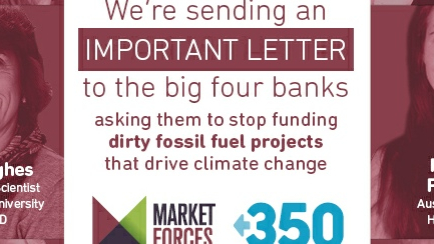 Sixty prominent Australians are calling on the CEOs of the big four banks to stop investing in the fossil fuel industry through an open letter organised by Market Forces and 350.org launched today.

The letter will appear in mainstream media advertisements from Saturday1, while an online version of the letter allows members of the public to add their own name in support of the letter.

Former Chair of the Australian Coal Association Ian Dunlop, also a signatory to the letter, said "The coal industry, and its bankers, have known for more than 3 decades that carbon emissions from coal consumption would, at some stage, stop expansion of the industry. That time has now come."

The letter comes as US President Barak Obama, in a speech this week, encouraged fossil fuel divestment campaigns in his own country and a week after the Australian Government's Climate Commission released a report acknowledging that most of the world's fossil fuel reserves would need to be left in the ground in order to prevent global temperatures rising more than 2˚C above pre-industrial levels.

"The big four banks have been playing an instrumental role in financing the expansion of the fossil fuel industry, which is threatening natural icons such as the Great Barrier Reef, as well as our chances of avoiding runaway climate change," said Mr Vincent. "We need Australians to get behind this call to the big banks, telling them it is not acceptable to finance this environmentally destructive and economically risky industry."

To view the open letter and its complete list of signatories online, please visit:
http://openletter.marketforces.org.au
Signatories are available to speak to media on request.

1. A full-page advertisement will appear in the Weekend Australian Magazine on Saturday, 29 June and advertisements will also feature on The Age, Sydney Morning Herald and Brisbane Times' websites.