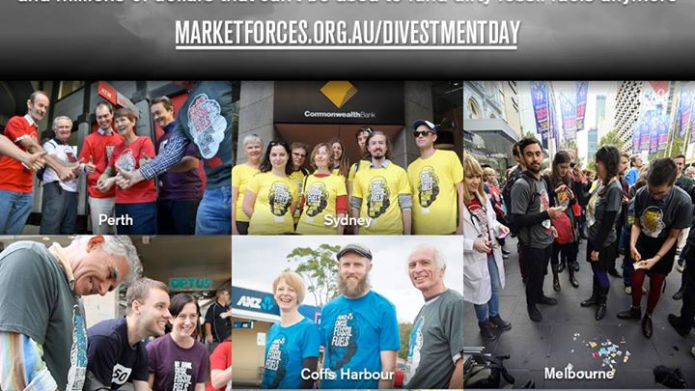 This weekend, hundreds of customers with Australia's biggest banks have shut down their accounts to protest the banks' lending to Australian coal and gas projects. Public divestment actions took place in fourteen cities and towns across Australia on 2nd and 3rd May, reflecting growing public dissatisfaction with fossil fuel expansion and numerous recent scandals casting doubt over government approvals processes.

Since May last year, thousands of customers have ‘put their bank on notice' and pledged to move more than $120 million out of the Big Four banks unless they commit to ruling out future loans to coal and gas projects, say campaigners from 350.org Australia and Market Forces.

"This weekend, Australians turned up in force to take action against a system which is failing to protect us from unlawful coal and gas expansion and the impacts of climate change," commented Julien Vincent, Lead Campaigner from Market Forces.

"Companies which finance fossil fuel projects need to be aware of the growing financial and reputational risks involved in supporting climate change."

Since 2008, Westpac, ANZ, NAB and the Commonwealth Bank have loaned a collective $19 billion to new coal and gas projects, including the controversial Abbot Point coal terminal and the Maules Creek coal mine.

Said Felix Riebl, lead singer of Aria winning band The Cat Empire said: "I realized I had a choice about where I put my money and how significant those choices can be from an environmental and ethical perspective. Switching banks was a simple and powerful choice."

Commented Evelyn Gyulkhandanyan, a Melbourne based mum: "I arrived three months ago with my family with Armenia. Wherever you are in the world, Armenia or Australia, the situation is similar, fossil fuels are causing huge pollution. I'm here speaking as a mother and my concern is what we do now and how that will affect what will happen in a hundred years time. That's why I'm leaving the Comm bank today and moving to a bank which doesn't invest in fossil fuels."

Said Dr. Helen Redmond, a medical practitioner: "I'm participating today because climate change is a public health emergency. Doctors have a duty of care to humanity to divest from fossil fuels."