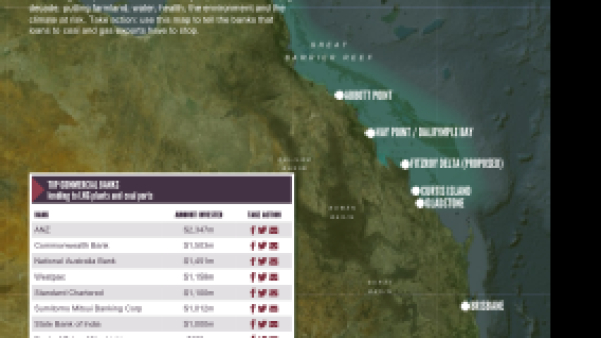 A new interactive map has been published that identifies ANZ as the commercial bank lending most heavily to coal and gas export projects along Australia's Eastern seaboard, including in the Great Barrier Reef World Heritage Area. The map, by Market Forces in partnership with 350.org, allows people to view loans to ports in specific locations and take action to communicate directly with the banks that are named.

ANZ topped the list of over 35 commercial banks, having loaned $2.35 billion (bn) to coal and gas ports from Newcastle to Abbot Point between January 2008 and May 2013. Commonwealth Bank was second on the list having loaned $1.5 bn, followed by NAB ($1.45 bn) and Westpac ($1.16 bn). The ‘big four' Australian banks' contributed almost a third of total project finance lending.

Market Forces and 350.org are encouraging customers of the ‘big four' to put their bank on notice that either loans to coal and gas projects stop, or the customer will be forced to take their money elsewhere. Since the beginning of May, customers accounting for about $13 million in savings have made this commitment.

"The coal and gas industries are hell-bent on expanding, building a new series of export terminals in the Great Barrier Reef World Heritage Area and jeopardising our chances of keeping a lid on climate change," said Julien Vincent, Market Forces Lead Campaigner.

"If the big banks lend to these new dirty coal and gas projects, they are taking a massive gamble with the Reef and our climate. It's vital that customers of ANZ, Commonwealth, NAB and Westpac intervene and tell their bank to stop lending to these environmentally destructive projects", said Mr Vincent.

"When you do the maths on avoiding the worst impacts of climate change, there simply isn't enough room in the carbon budget for new fossil fuel projects. If new coal and gas projects amount to an exercise in digging up unburnable carbon, that makes the loans that enable these projects a massive economic gamble," said 350.org co-founder and author Bill McKibben, who arrives in Australia next week for a "Global Warming: Do the Maths" tour.

The interactive map can be viewed at marketforces.org.au/banks/map

Bill McKibben's tour dates can be found at maths.350.org/australia