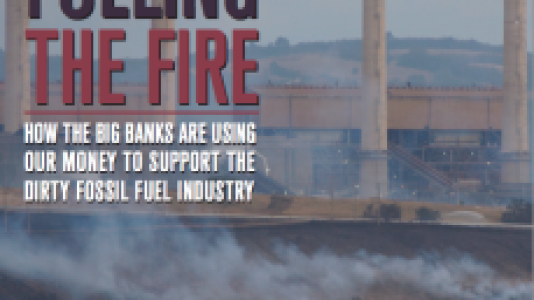 A new report from Market Forces shines a light for the first time on Australian banks' financing of the fossil fuel industry and the disparity between lending to ‘clean' and ‘dirty' energy.

Covering over 150 financial institutions, the report - Fueling the Fire - identifies ANZ as the leading lender to fossil fuels, having provided $12.6 billion to coal, oil and gas in Australia since 2008.

With Commonwealth bank loaning $9.9 billion, National Australia Bank $8.3 billion and Westpac $5.9 billion, Australia's "big four" banks have lent $36.7 billion to the fossil fuel sector in Australia since 2008. This accounts for over a quarter of the $135 billion made in loans to the sector since that date.

"This report leaves no doubt that Australia's big banks are the lynchpin of major fossil fuel projects in Australia. With the ‘big four' involved in three quarters of the deals to take place in the sector, it's highly unlikely that any major polluting project could go ahead without their investment", said Market Forces Lead Campaigner Julien Vincent.

"Banks have a pivotal role to play in driving our economy to one that is less carbon intensive, but despite the fact that globally, investment in new renewable energy is outstripping that for fossil fuels, Australian banks remain heavily skewed in favour of greenhouse intensive projects," said Vincent.

"That our own money is being used to sabotage our future will come as a shock to the overwhelming majority of Australians who want to see action on climate change and icons such as the Great Barrier Reef protected from proposed new coal export projects. While the banks publicly herald their sustainability credentials, their lending practices tell an entirely different story."

The report also highlights the increasing risk of exposure to potential stranded assets in the fossil fuel sector.

"Examples such as the $900 million sunk by the big four into Wiggins Island Coal Export Terminal demonstrate that the risk profile of fossil fuel projects is heightening," said Vincent. "The likelihood for assets to become stranded means the risks of investment are becoming as much financial as environmental. This should surely at the centre of any potential funding decisions by banks with regards to the Galilee Basin and its associated infrastructure."

The report can be found on this page.

Note: All amounts are in Australian dollars.